DOJ antitrust chief Makan Delrahim slots the event for May 2-3 and says the event may result in Justice changing how it looks not only at mergers, but also at spot advertising and retrans.
By Harry A. Jessell | March 20, 2019 | 2:54 p.m. ET. 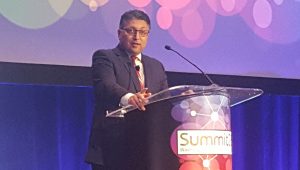 U.S. Department of Justice antitrust chief Makan Delrahim today announced the dates — May 2-3 — for his long-promised workshop on how antitrust regulators should evaluate broadcast mergers in light of digital competition.

Speaking at a Q&A during the annual conference of the American Communications Association (formerly the American Cable Association) in Washington, he said the workshop may require the DOJ to change the way it looks not only at mergers, but also at spot advertising and retransmission consent.

“If advertising dollars have moved to other places, does that mean our analysis should be different?

“I am looking forward to learning that” in the two-day workshop. “I can assure you that our test is flexible — that is one of the benefits of antitrust law over a regulatory regime.”

Although Delrahim had dates, he did not have an agenda or the names of anyone who might appear at the workshop. “We will have some industry leaders and some academics who are on top of this issue. We have discussed a number of names” but he added he didn’t want to list any until they were nailed down.

During the Q&A with ACA President Matt Polka, Polka asked Delrahim to comment on FCC Commissioner Michael O’Rielly’s suggestion that the DOJ stop using a narrow definition of “media market” to block combinations like that of Top 4 TV stations in a market. Delrahim did not take the bait, saying only that the DOJ and FCC have two separate statutory mandates and two different ways of evaluating deals.