Amazon Web Services is developing new technology — the Cloud Digital Interface — to support uncompressed production workflows in the cloud that should eliminate latency for remote productions looking to, among other things, switch between camera feeds, insert graphics or trigger replays.
By Glen Dickson | November 20, 2020 | 5:30 a.m. ET.

As broadcasters explore the feasibility of using the public cloud for live event production, latency is generally cited as the biggest stumbling block. For live events like sports the compression used in the cloud not only adds a delay in final distribution to the home compared to traditional playout techniques, but it also causes a problematic lag for production personnel looking to switch between camera feeds, insert graphics or trigger replays.

Public cloud giant Amazon Web Services (AWS) has recently addressed the second part of the latency challenge by developing new technology to support uncompressed production workflows in the cloud, which it calls the Cloud Digital Interface (CDI). CDI, a nod to the Serial Digital Interface (SDI) used by legacy on-premise broadcast equipment, supports uncompressed video at formats up to 4K UHD at 60 frames per second with a latency as low as 8 milliseconds, or less than one frame. With COVID-19 having already accelerated broadcasters’ adoption of cloud workflows, AWS hopes that CDI will pave the way for much more production on its platform.

First, LTN — which in the past two years has broadened its portfolio beyond content contribution and distribution by acquiring remote production firms Niles Media Group and DTAGS — used its IP transport network to backhaul four 1080i/60 camera feeds from a high school football game to its “LTN Create” production operations center in Kansas City, Mo. There, the 15 to 20 megabit per second (Mbps) feeds were decoded and processed with traditional gear to produce a single “clean feed”, including switching, instant replay and audio mixing functions. 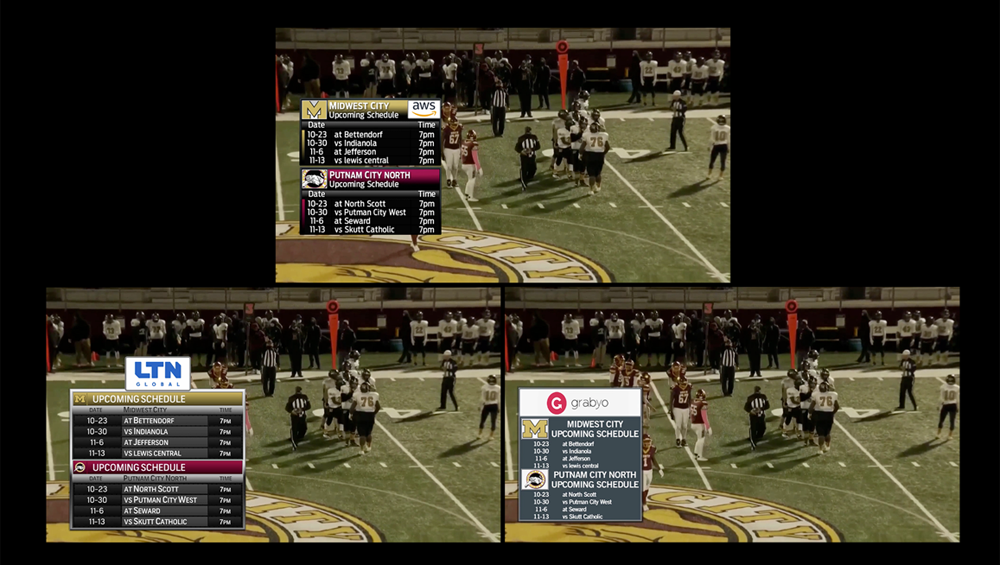 That clean feed was then re-encoded and sent by LTN to the AWS cloud and into MediaConnect, the high-quality, low-latency live video transport system from AWS unit AWS Elemental that supports data rates up to 120 Mbps [for the demo, the feeds were sent by LTN at 20 Mbps using H.264 compression].

Once in the AWS cloud, the clean feed was uncompressed and managed with CDI, which allows low-latency network transport between different Elastic Compute Cloud (EC2) “instances”—virtual servers used to run an application. In this case, the EC2 instances were running Grabyo Producer switcher software, which replicated the feed twice-over and then added different graphics to create three distinct regionalized feeds.

Those three feeds were then reencoded and sent back via MediaConnect to the LTN network for final distribution, which could be to a TV station, cable operator or digital platform. The three customized feeds were shown on a multiviewer to demonstrate both the different graphic treatments and the synchronization of the frames. 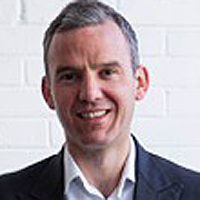 “This is showing you how you can create multiple outputs for a single event with a very simple setup, and run by a single person, or people running different parts of the production from different locations,” said Grabyo CEO Gareth Capon.

While the production workflow demonstrated was relatively simple — inserting different graphics in the same video — Capon said Grabyo’s software could do far more with uncompressed video, including inserting different audio or even switching between live camera feeds in the cloud. He said the AWS/LTN/Grabyo demo was more about showing the potential of CDI for live production. He added that without CDI just replicating feeds in the cloud was difficult, as generating multiple compressed outputs from the Grabyo switcher quickly ate up computing power.

“This was a genuine challenge of some of our cloud productions in the last 12 months,” said Capon. “As people wanted to scale them, we were having to quite heavily compress some of the outputs between the instances of our Producer vision mixer in the cloud.”

AWS Elemental Senior Product Manager David Griggs agreed, and said the old way of working in a single EC2 instance in the compressed domain would eventually run into technical limits. 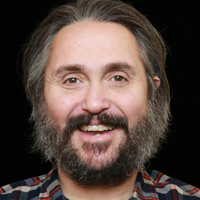 “At some point you’re not going to be able to replicate that stream anymore, because you hit a resource constraint of some description, whether that’s CPU, memory, or I/O bandwidth,” Griggs said. “What CDI allows you to do is to scale and spread that processing across multiple instances. So in this case each of these replicated feeds is being processed on its own instance, and therefore, ultimately the scalability of the deployment is far less constrained.”

Related Story  Tony Perkins Takes Over As Host Of WUSA’s ‘Get Up DC!’

That kind of flexibility should allow broadcast customers to grow and shrink their cloud-based production infrastructure based on the unique requirements of each event, Griggs said. And his hope is that CDI will eventually allow a true production control room (PCR) to be built in the cloud with different tools from multiple vendors.

“It’s the interface, it’s the SDI in the cloud, it’s that interoprability tool that allows a data plane of multiple solutions to communicate,” Griggs said. “If we don’t have that, we wind up building very cool processing islands that can’t talk to each other, and so we’ve missed. So we’re really serious about CDI becoming not just a fast and reliable connectivity product, but also a product that brings that level of interoperabilty.”

He said that AWS is currently reaching out to various broadcast vendors in the production, master control and playout environments about the virtues of launching their products in the cloud using CDI, with the near-term goal of creating an extended POC of the technology for live production. 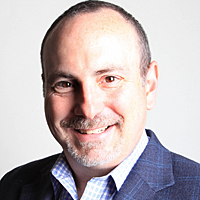 “It’s all 20 sports the university does,” Young said.

LTN has already been using its centralized production system to create differentiated home and away feeds for a Major League Soccer team, Young said, and similar functionality could also be accomplished in the cloud using an application like Grabyo’s. He expects further growth in live content, which he calls a “differentiator” and “churn killer” for programmers and platforms competing against SVOD services, as the cloud makes production more affordable.

Young added: “It’s all possible now with technology like this, and workflows that are efficient like this.”