Offerings from Blackbird, Grass Valley and Avid have seen a surge in usage since the pandemic spurred a remote workflow shift with costs coming down and performance improving.
By Jennifer Pallanich | August 13, 2020 | 10:00 a.m. ET.

With the combination of improvements in cloud editing technology, decreases in costs and the need for so many editors to work remotely, broadcaster buy-in on cloud editing has accelerated.

Blackbird, which predominantly sells its editing solution through companies like TownNews and IMG, offers a fully cloud-based editing suite that relies on a proprietary codec for high-speed work. Vendors like Avid and Grass Valley started promoting cloud-based versions of their hardware-based editing systems a couple of years ago. As broadcasters started using these cloud-based versions, vendors quickly realized one of the key desires for cloud-based activity is more storage. They are also working to make other parts of the overall workflow cloud-ready.

The Blackbird concept is the freedom to operate from anywhere, says Blackbird CEO Ian McDonough. The cloud-based system can run on any computer with any bandwidth connection and any kind of storage.

Blackbird needs about 2 mbps bandwidth for editing because the Blackbird codec makes it possible to create a high-quality proxy version of a video, allowing the editor to manipulate images frame by frame in the cloud.

Moving content around is a high-energy effort, so using the Blackbird codec “ticks the green checkboxes,” McDonough says. 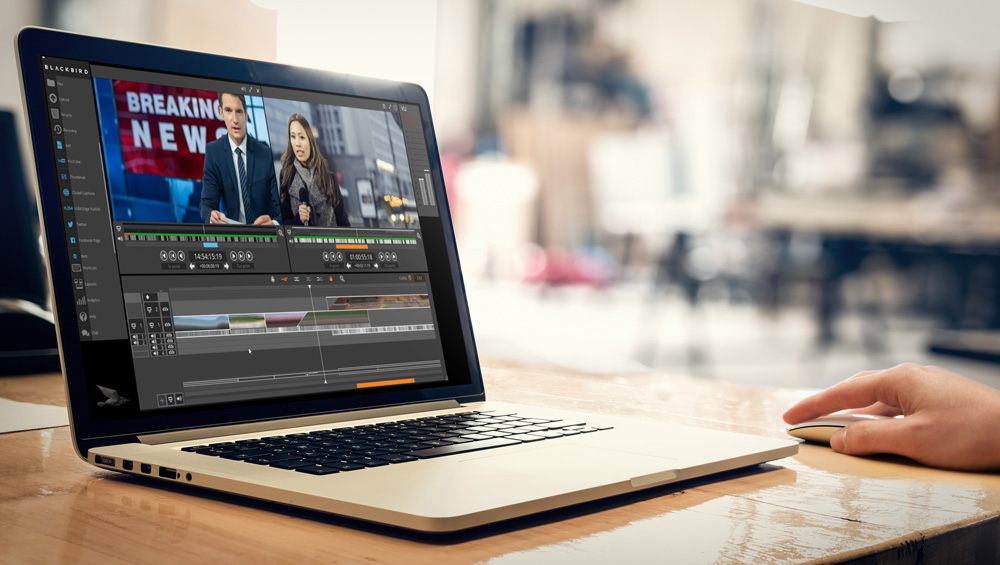 The Blackbird cloud-based system can run on any computer with any bandwidth connection and any kind of storage.

The codec pairs with the Blackbird Forte editing suite, which can handle 18 video tracks, 36 audio tracks, complex transitions, color correction and voice overs, all in a browser tab.

“There’s no download or installation or configuration to the machine. All the toolsets are there when they log into it,” McDonough says. “It’s extremely efficient from a resource perspective.”

In the pre-COVID days, McDonough says, customer needs revolved around efficiency, scalability and speed. Now, there is the added need for an efficient remote production tool, he says. Customers in the U.S., Europe and across India and Asia have found that the bandwidth of the capacities required to run a traditional editing system don’t exist at home, so these customers are seeking scalable options for hundreds of editors.

Sky News Arabia recently announced it is using Blackbird. Through TownNews, about 50 local news stations accross the country are using Blackbird, as is the world’s largest news organization in New York, with deployments in multiple bureaus around the world, he says.

The National Rugby League in Australia uses Blackbird to create and push out fully-formed clips in less than 30 seconds after action takes place on the field.

“The solution was possible, but there were still some things getting in the way. One was the cost of running a cloud system,” he says.

At the time EDIUS Cloud was unveiled, it would have cost about $2,000 per month per client to run on the cloud and carry out regular editing procedures, Kataoka says. A lot of that cost was tied to the web platform costs. EDIUS Cloud runs on the Amazon Web Services platform.

About a year later, prices had been cut in half even though the AWS system performance had improved. Now they are a more “realistic” $200 per month per client. One of the reasons prices have dropped, Kataoka says, is because Grass Valley worked with Amazon to develop a way to access video content running on Amazon S3 storage.

Using object-based storage made it possible to lower costs while offering better performance and larger storage capacity, he says.

“That was one of the difficulties of building a cloud platform. The storage was a costly area, and keeping large files a long time used to be very expensive,” he says.

In April, shortly after stay-home orders began spreading across the country, Grass Valley ran an EDIUS Cloud work-from-home promotion, in which the company gave licenses to people using the software from home instead of at the office.

As a result of better pricing for EDIUS Cloud and the continuing work-from-home environment, Grass Valley has received a lot of requests to temporarily use EDIUS Cloud.

Kakaoka says they want “an editing platform in the cloud for a month. The solution is becoming more realistic, and we have customers deploying it that way.”

A cable system in Japan is using EDIUS Cloud for daily editing purposes, he says, and major stations in the U.S., Japan, China, Australia and Singapore are either beginning to look at or already testing the EDIUS Cloud solution.

While some broadcasters have been forced to use the cloud for editing, many are “seriously considering” migrating to the cloud, Kataoka says. “They want to build their future systems, and they want the next updated based on or partly based on the cloud.”

Grass Valley is working on designing the whole broadcast workflow to be run via the cloud, Kataoka says.

Avid previewed its Edit on Demand, a cloud editing environment, a few years ago and soft-launched it at IBC last year.

At the time, says Ray Thompson, director for marketing for video solutions at Avid, there was “good interest from a lot of companies interested in cloud editing to enable collaboration while working in other places.” That interest, he adds, spiked after the COVID pandemic spread around the globe.

“It’s really running the gamut in terms of who’s using it,” Thompson says. Edit on Demand is being used for news, soap operas, episodic shows, documentaries and commercials, he says.

Edit on Demand is a turnkey editing suite in the cloud that makes it possible to use Media Composer on the cloud, Avid NEXIS cloud storage on Microsoft Azure, and the FileCatalyst transfer tool. Edit on Demand needs about 20 mbps to 25 mbps download speed.

Even with challenging internet scenarios at editor’s homes, he says, Edit on Demand has delivered an “improvement in performance because the systems that are running Media Composer in the cloud are very powerful.” 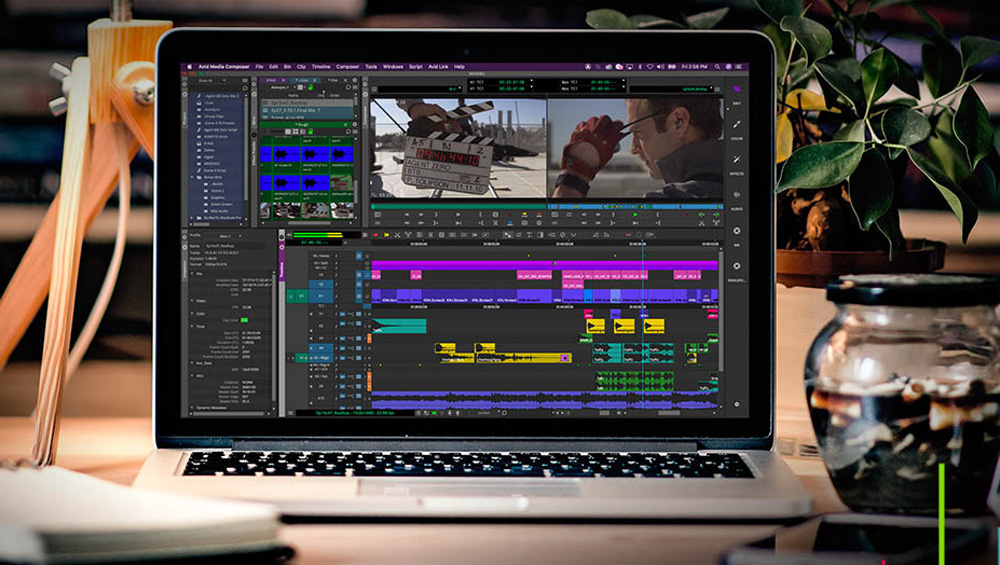 Avid Edit on Demand is a turnkey editing suite in the cloud that makes it possible to use Media Composer on the cloud, Avid NEXIS cloud storage on Microsoft Azure, and the FileCatalyst transfer tool.

Edit on Demand is scalable and the end user can set it up quickly by running a script.

“We can spin up the environment in a matter of hours as opposed to days. You can be up and running in three or four hours with a full producing environment and ready to go,” Thompson says.

When Edit on Demand first rolled out, there were not too many plug-ins available for Media Composer, but more and more third-party plug-ins are becoming compliant, he says.

Also, he adds, editors who have content in storage in the cloud for editing purpose are saying they’d like to leave that content there rather than taking it down.

“They want asset management add-ons with more storage. They want to be able to migrate a project from an expensive tier to a less expensive tier in the cloud,” Thompson says. “That’s what the cloud is ideal for, backing things up to the nth degree.”

While Avid does offer asset management in the cloud, it doesn’t offer it through the SaaS environment. Yet.

“That’s the piece we’re working on,” he says.

Another request is for the ability to leverage cloud automation, such as using artificial intelligence for tasks like metadata extraction to enable more powerful searing capabilities in their libraries. This capability is in the pipeline for Edit on Demand, Thompson says.

He believes a lot of broadcasters are “leaning into the idea” that editors can work from home or elsewhere once the quarantine lockdowns begin to lift.

“People have realized how effective working from home can be, but how efficient it can be, as well,” Thompson says.