Robotic pedestals for newsroom cameras are fast evolving, allowing for more creative shots, AR and VR integration and far greater operational efficiency. Next up: full autonomy. Above: The Telemetrics OmniGlide Roving Platform features an innovative new drive system that is completely automated and leverages advanced software and XY sensors to “learn” the environment it is operating in.
By Jennifer Pallanich | February 27, 2020 | 8:59 a.m. ET.

For the world of newsroom camera robotics, its SkyNet moment may finally have arrived.

The robotic pedestals that move cameras around studios are delivering ever smoother movements and creative shots. They’re interacting with augmented and virtual reality elements. And they’re making it possible to remotely operate the cameras from the next room — or even across the continent.

These robotic bases for cameras, whether on pedestals, floor tracks or ceiling tracks, have become must-haves not just because they offer a way to get different types of shots, but also for operational efficiency in broadcast studios. The units are increasingly integrating into studio systems, while evolving improvements in the technology that the units use for activities like navigation and collision avoidance mean the systems are becoming easier to operate.

A single person can control multiple cameras simultaneously. Sky News Australia, for example, is directing the robotic bases for cameras for multiple studios around the continent from its main control room in Sydney. At the same time, vendors say software improvements and autonomy for these systems are in the works.

Using robotics to maneuver cameras in a newsroom frees up talented camera people to work in the field “where their skills are really needed,” says James Eddershaw, CEO Shotoku USA.

At their most basic, the robotic systems can pan and tilt, zoom and focus. The next stage is moving the camera up and down, while a fully robotic pedestal moves around the floor on X- and Y-axes. Cameras can also be mounted on floor or ceiling rails to provide a different style of camera movement in the studio. 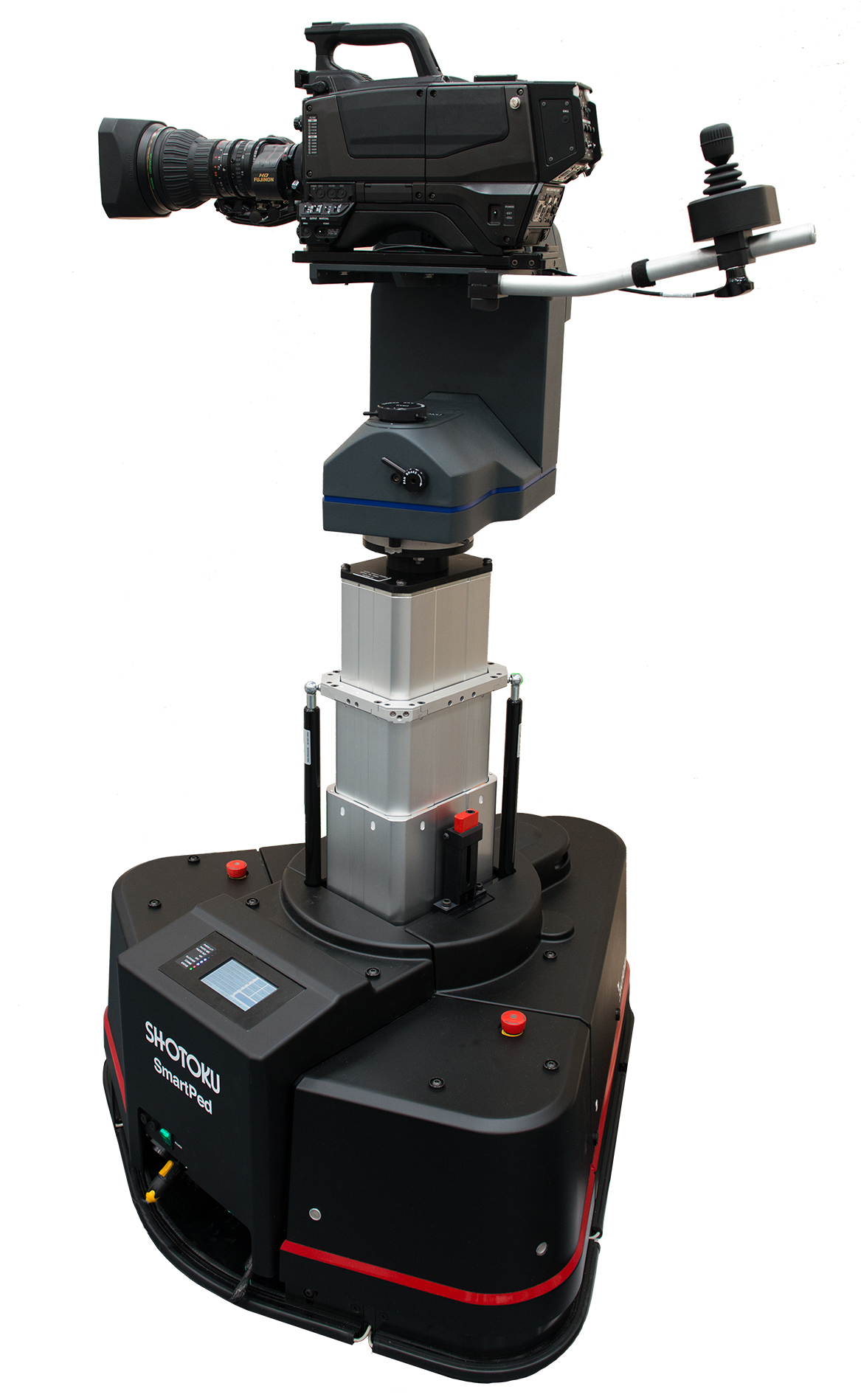 Bruce Takasaki, marketing product manager for camera motion systems at Ross Video, says different motions “create a more dynamic look” that can be appealing to viewers. The quicker movements can supply an up-tempo feel, while a slower movement may be almost unnoticeable, he adds. Camera movement is, he says, a great way to get away from talking head segments that might be otherwise visually boring.

“Moving the camera around while people are talking provides an element of dynamism that’s not there with fixed cameras,” Takasaki says.

And broadcasters seeking to present fresh content to viewers are increasingly adding augmented reality and virtual reality elements to their segments.

“Those kinds of systems require very precise information fed to them about where the real camera is,” Eddershaw says. “If you don’t get those two things lined up, it’s not convincing.”

And when it comes to robotic pedestals moving around a studio, any number of factors can make a shot look less than stellar.

According to Michael Cuomo, VP and head of the engineering group at Telemetrics, sometimes studio floors are not smooth, or are soft.

“That’s kind of our biggest headache,” he says. A recent trend has been the use of luxury vinyl tile with foam backing, Cuomo says. “It’s nice for people to walk on, but not so good for the robotics.”

Robotics are heavy because they are typically moving multiple pieces of equipment, including the pedestal, camera head, lens, prompter and viewfinder, among other elements. “If the floor is soft, the pedestals sink into the floor. It’s kind of like driving out of a ditch,” Cuomo says

The result can be shaky video footage.

On the other hand, Cuomo says, a smooth and level concrete floor is “perfect” for moving robotic pedestals.

And as the pedestal moves around the studio, it needs to know where it is and where it’s going.

At this year’s NAB Show, Shotoku plans to show the smart absolute navigation interface (ANI). A small camera is placed on the pedestal and is aimed at the ceiling to navigate by a constellation of dots on the ceiling in the studio. Eddershaw calls it a modern-day version of navigating by the stars.

“It knows the patterns. It is able to say, ‘I see these stars, I must be in this position,’” Eddershaw says. 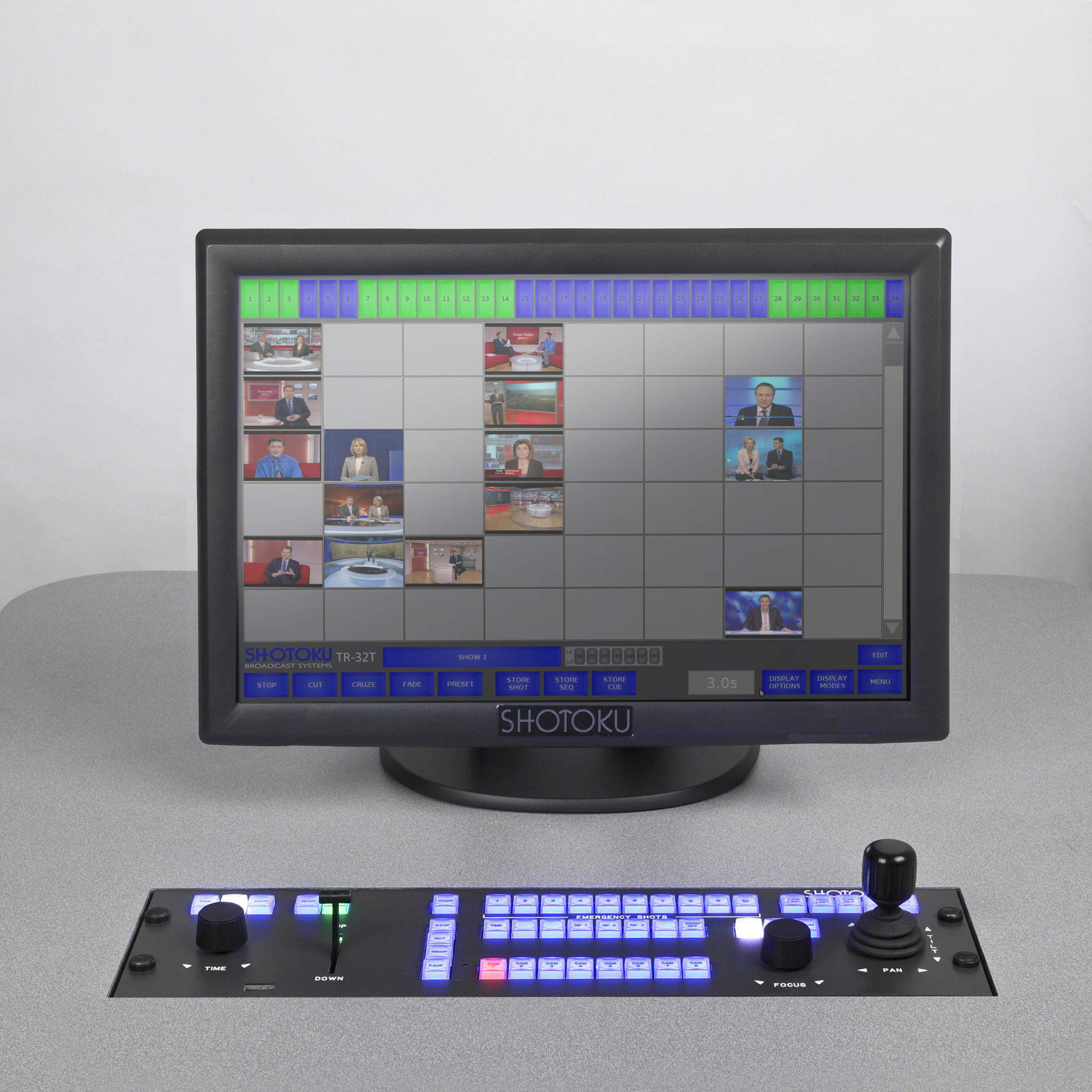 But to get to that position safely, the robotic pedestals need to rely on collision avoidance technologies.

Shotoku’s SmartPed has built in “detectives” that sense the objects in the environment two to three feet away. “It will detect things you didn’t know were there,” Eddershaw says. “Real-time proximity detection prevents it from rolling into that.”

How the rovers maneuver around the studio is a consideration. Telemetrics, for example, offers omnidirectional rovers. “They can turn from a stop without moving or shifting,” Cuomo says.

As Takasaki puts it, concerns about rails on the floor tend to be about how the rails break up the space, make it difficult to walk across safely and reduce flexibility of the cameras as they can’t be reconfigured on a daily basis. Rails can be integrated into the floor as a means of addressing the safety factor, he says. Ceiling rails also eliminate some of the safety worry but open up a completely different one: ensuring the system is securely installed and that no equipment will crash to the floor.

Clients who are willing to commit to rails and design their studio around a circular rail configuration can achieve beautiful shots “without any effort at all,” Takasaki says. If multiple cameras are needed, concentric rails can be installed to accommodate the extra cameras.

Takasaki singled out BBC as a pioneer for purchasing Furio systems from Ross to “create a whole new look” back in 2012.

Panasonic’s PRO PTZ cameras allow for a variety of placements. Upright or hanging upside-down. Placed on a table, or mounted to a tripod, hung from the ceiling or a truss, mounted to a pole, or installed on a wall, the low-profile design of the cameras keeps installation options versatile. The cameras have a 1/4-20 tripod thread mount, come with an easy release ceiling mount bracket, and a drop protection wire harness for added installation safety and security.

Over the years, the technologies behind robotic camera pedestals have evolved so they are increasingly easier to operate remotely. One such advance is around IP technology.

“Everything we do is IP-based,” says Assaff Rawner, managing director of Mark Roberts Motion Control (MRMC), a Nikon company. “The control room could be next door or several miles away.”

For Sky News Australia, that control room is actually many miles away — across the continent, in some cases.

In 4Q 2019, Vinten announced that its IP-based FH-145 robotic camera heads, combined with other equipment like Vinten Quattro pedestals, was going to help Sky News reduce its operational costs through the use of centralized IP-based control for remote broadcasts.

“They wanted to be able to have a control room in Sydney and be able to operate those robotic heads from there. In terms of resourcing, that makes their lives easier, to source one control room and not five or six or seven around the country,” Grove says.

With Panasonic’s PRO PTZ cameras, a station can use an IP browser, such as Chrome or Safari, to fully control the PTZ operations from the control room or even from a remote location. IP control with image monitoring via PC, Mac and mobile terminals simplifies the management of cameras around a station, or across a worldwide enterprise network. IP video monitoring and remote camera control can also be performed from mobile devices such as an iPhone, iPad or an Android device.

In the end, Grove says, many companies are seeking a way to “best use technology” to remove the need to shuffle people around different locations. “From a cost perspective it makes sense. From an employee perspective, it makes sense.”

At the same time, she says, broadcasters are often interested in such equipment for redundancy purposes.

“They want to control that operation in the next city if they have an issue, as a backup,” Grove says. “If there’s a resource issue, they can provide support.”

As to the future of robotic pedestals for cameras, Takasaki believes that “mechanically there are only so many things you need to do and solve.” The future value, he says, will come from the ability to address efficiency, quality and reliability. “That is more about the software layer,” he says.

MRMC’s Rawner believes the robotics will become fully autonomous. “It’s happening already,” he says, noting it’s likely they will reach full autonomy in the next couple of years.

“It isn’t just a case of being autonomous, but it’s also got to look good on screen,” Rawner says. “It’s not good having something that just follows a presenter around. It’s got to look natural and look like you’ve added a cameraman to the studio, rather than something that looks like a robot. That’s the key.”