Compliance and monitoring companies are doubling down on automation, artificial intelligence and technologies that support the shift into the cloud as broadcasters seek out replacements for their Volicon systems.

Verizon’s January 2019 discontinuation of the Volicon Observer shook up the compliance and monitoring sector of the broadcast industry, leaving media companies who were happy with their Volicon systems to find a suitable replacement. The task means evaluating not just mature capabilities associated with over-the-air broadcasts but also over-the-top (OTT) signals, and that type of monitoring is more complex and less mature.

At the same time, compliance and monitoring offerings have expanded well beyond ensuring that closed captioning appears to the point that they are now akin to a Swiss army knife.

Vendors are also focusing on providing products and services that take advantage of the power of artificial intelligence to help automate tasks and that can handle the next generation of technology changes, such as video over internet protocol. COVID and working from home conditions led to high demand for cloud-based remote monitoring methods, resulting in some shifts away from capital expenditure for on-premises equipment and toward operating expenditure.

Mediaproxy CEO Erik Otto likens Verizon’s Volicon decision to “Lincoln deciding not to make cars anymore, and GM says, ‘We’ll have a good year because everyone who would have bought a Lincoln will buy one of ours.’ ” 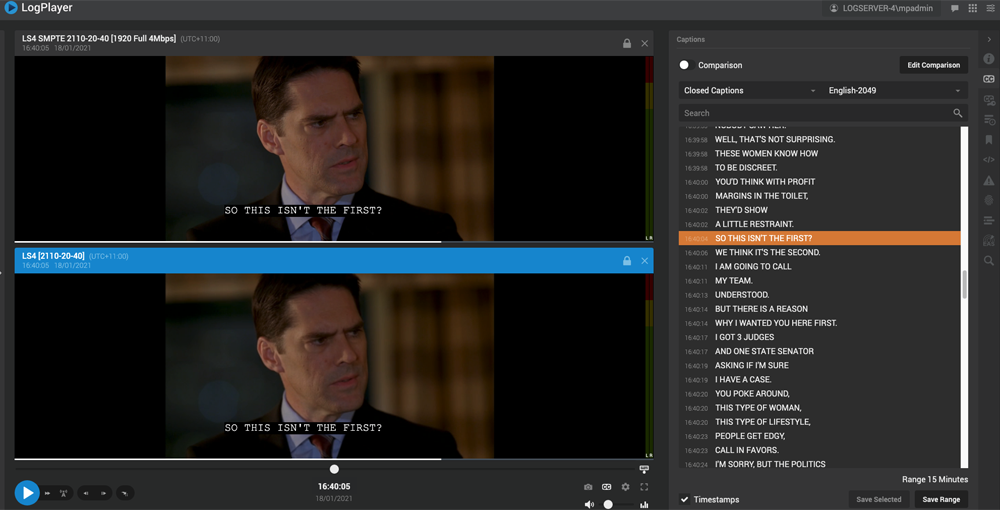 Because compliance and monitoring systems are a core piece of technology, broadcasters typically prefer to use the systems for five years or more, he notes. Those who had long relied on Volicon, he says, were given an opportunity to do due diligence and “wisely educate” themselves on other products in the market.

When it comes to compliance and monitoring, broadcasters need to know that whatever signals they’re sending out, whether OTA or OTT, are arriving at their destination in a way that viewers enjoy both a good quality of service and a good viewing experience. But monitoring OTT signals is complex because there are so many variables involved and the technologies are newer.

There are multitudes of channels in different formats with varied resolutions that need to be monitored at any given time, notes Pini Maron, VP of professional services at TAG Video. Because of the sheer volume, monitoring solutions need to be as automated as possible, he says.

Alarms for problems the monitoring system discovers can be sent, which gives “a good picture of where the problem is to solve it as quickly as possible,” Maron says.

Ric Belding, senior director of sales engineering and strategy at Vela, says OTT raises concerns like bit rate and consistency of the bit rate as well as different carrier types and how the signal is transmitted across multiple points in the delivery chain.

Brick Eksten, Qligent CEO, says broadcasters are becoming savvier about issues like resolution drop. For example, the broadcaster may send out video with 10 layers, but if there is a problem in the delivery chain, not all of the layers may be delivered to the user.

“The resolution you’re getting, the quality you’re getting is stepping down a notch,” Eksten says. “We’re looking for a bit more science — that means data — to understand where those impacts are happening, and how is that impacting my business.”

Another monitoring challenge that arises with OTT is ensuring content delivered to different geographies complies with rules and regulations in those areas, says Anupama Anantharaman, VP of product management for Interra Systems.

Compliance and monitoring systems have evolved into versatile tools, Otto says, similar to Swiss Army knives. They don’t just record and log, but can be used to publish to social media, for ad verification, monitoring transmissions, business intelligence and ratings reviews to name a few, he says.

Or, as Belding puts it, “there are a dozen systems that will tell you captions are missing, but what else does it do?” Because these tools are capable of doing so many tasks, often with data that already exists, they can bring an excellent return on investment and reduce the need for other tools to do individual tasks, he says.

On-air personnel can review themselves after a segment for instant feedback, content can be repurposed and distributed via social media and sales departments can prove an ad ran.

And one of those departments is all about the bottom line. Compliance and monitoring systems can show that the ads served up are compliant with specifications provided by the advertisers, such as 4K, a specific time slot or level of quality, Anantharaman says.

In an environment where most businesses are trying to do more with less, vendors are making capabilities like automation and artificial intelligence a high priority.

The goal, DesRosiers says, is to incorporate AI services in a way that helps streamline everyday tasks. 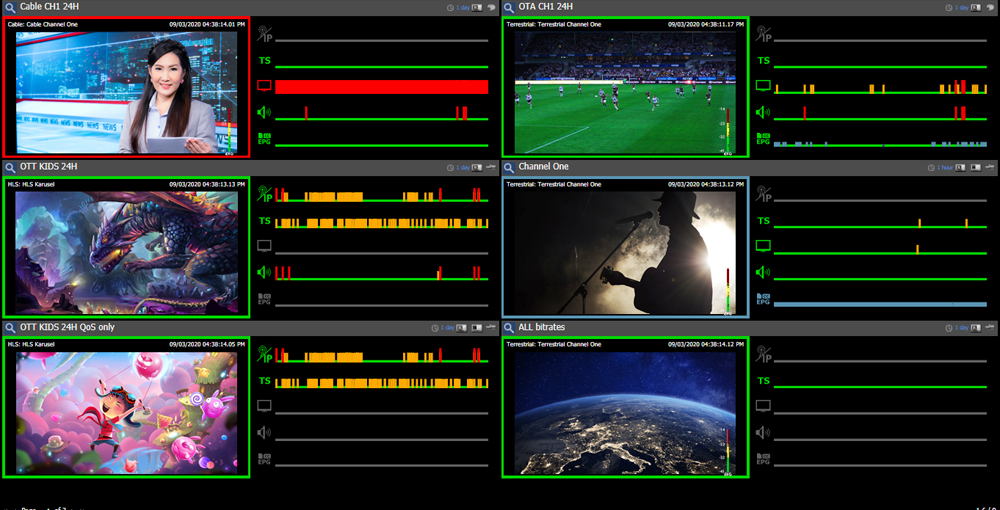 Users of Digital Nirvana’s MonitorIQ system will soon have access to MonitorIQ Chaperone, which is in beta testing. Chaperone monitors the monitoring system to make sure everything is functioning properly.

“They don’t have to have someone in their data center watching and monitoring things,” DesRosiers says.

Gary Learner, EVP for business development at Actus Digital, says the company is pushing hard on AI and process automation for its Actus Digitus Media Intelligence Platform, which is in its sixth generation with the seventh in development.

“Anything that can be automated and does not require manual intervention saves money and creates a more robust solution that will eliminate user errors and things like that,” Learner says.

Content and video analysis is one area where AI plays a role, he notes. 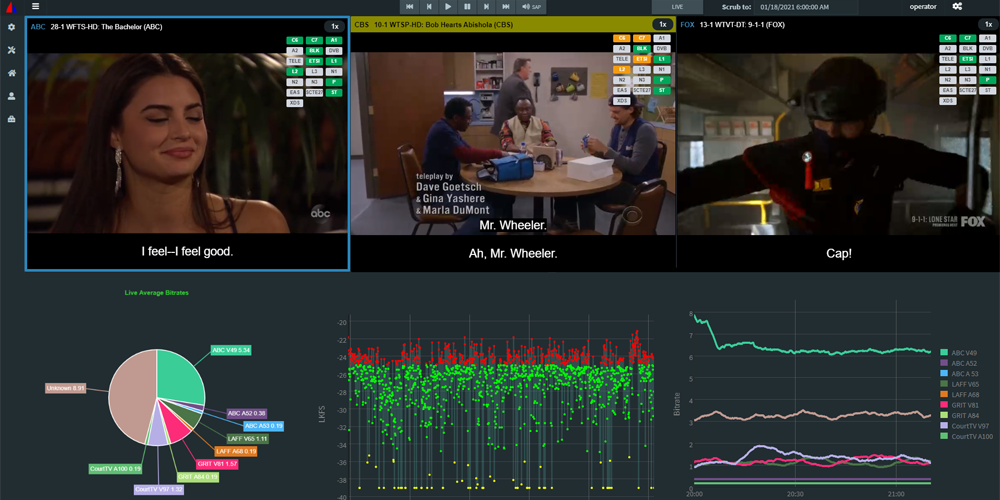 Anantharaman says AI can help with classifying and labeling content based on objects in scenes and using facial recognition. “Even though the industry is not at a point where it gives you 100% accuracy, there are solutions that provide a very high level of accuracy,” she says.

Interra’s Baton LipSync uses facial recognition technology to detect the face that is talking and make sure audio is properly synced up.

Belding says Vela has integrated some automation with AI into its systems to allow content to be identified by different things in the scene beyond the main person. For instance, he says, if there’s a news clip about Vice President Kamala Harris and there’s a sporting event in the background, AI can tag it with the sports details and the clip becomes searchable to anyone looking for Harris at a sporting event.

Automation is critical, Eksten says, and compliance and monitoring systems like Dymos are doing more with the data they are automatically logging. Data analytics can help the broadcasters identify weaknesses and strengths in their businesses, he says. That also helps shift the market of compliance from being a cost center that allows the operation to stay legal and compliant, to a product that provides real benefit, he says. 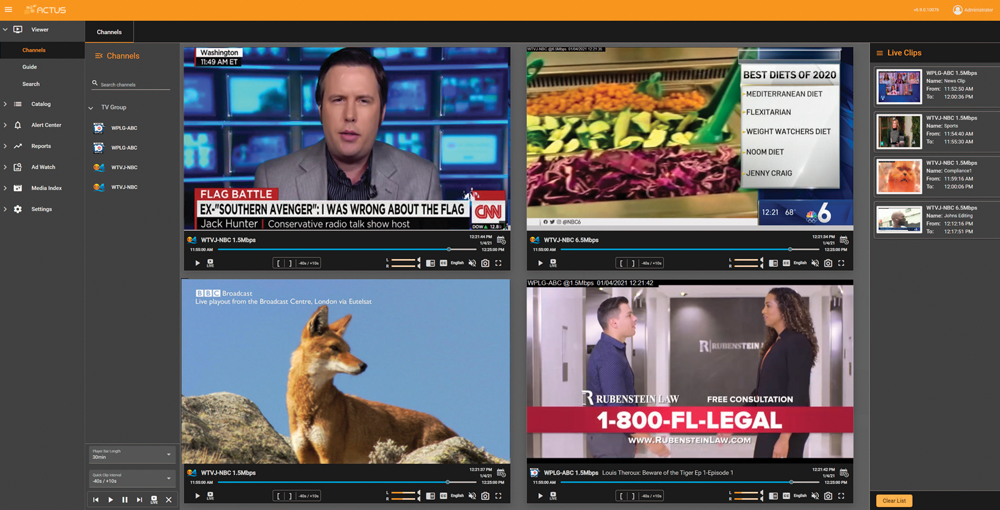 The broadcast industry is also starting to transition away from SDI to video over IP, and compliance and monitoring systems have to be able to manage the different formats and technologies.

Otto says SDI is “easy to understand,” inexpensive and “engineers have the subject cold.” Shifting from a single cable to transmitting video over the internet is “like relearning everything,” he says, and will take a long time. “It will be a long process, getting rid of SDI from our industry.”

In short, he says, sending video over the internet and meeting the SMPTE 2110 standards presents challenges not just for vendors but also customers, who need to think about networking and IT in new ways.

Mediaproxy’s compliance and logging solutions are able to “take us through next generations of technology changes,” Otto says.

Monitoring services also extend to special types of audio services, and earlier this month, TAG announced it had added monitoring for Dolby Atmos, which is an audio delivery system developed for theaters and features multiple audio tracks or channels from floor to ceiling to “do magic with the sound” that “comes from all directions” for an intense listening experience, Maron says.

The format has recently been made available for home theaters, and one of TAG’s customers asked them to develop the ability to decode and monitor Dolby Atmos stream. Dolby validated TAG’s monitoring, and the company is now offering that feature to customers, Maron says.

One of the other big focuses in the world of monitoring and compliance over the last year, with COVID keeping many people at home and out of the office, has been on remote access and cloud operations.

“The cloud is the big winner out of COVID, and service solutions in general,” Otto says. 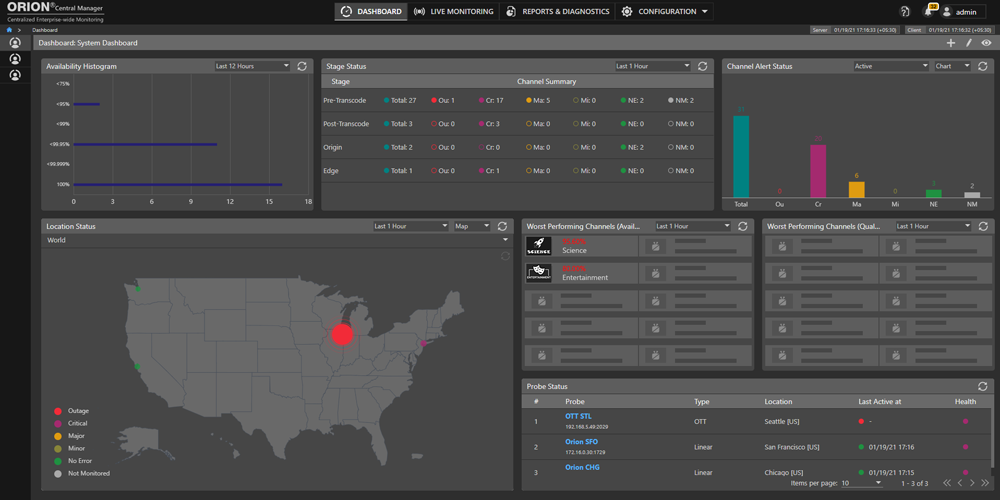 Interra’s ORION Central Manager has a quality status dashboard for every channel at various points in the video delivery chain.

Learner says COVID’s impacts on the broadcast industry have been mixed. While more people stayed home and spent more time watching media, broadcasters cautiously delayed replacing aging equipment if they could and deferred projects to this year, he says.

“It’s still unknown, the full impact it’s going to have long-term on the industry,” Learner says.

One thing is for certain, he says: the ability to work remotely is now a necessity while “before it was just a convenience.”

But it also provides a couple of added benefits in the form of scalability and virtualization. Scalability, Learner says, is useful in that it helps customers meet the needs of the moment and not have to fund a dedicated data center at times when they’re not using it. Virtualization provides the remote access.

Virtualization is also a shift away from on-prem hardware and represents a change in how technology is funded.

Eksten says one of the big changes in the last year is how many customers have frozen capex budgets and are pushing for opex arrangements instead.

“Four, five, six years ago, everybody needed to be capex and nobody wanted to talk about it. Now all they want to talk about is how do they get on opex,” Eksten says.