KNSD’s Stewart Is A ‘Champion Of Change’

Donna Stewart, news operations manager at NBCUniversal Local’s KNSD San Diego and a TVNewsCheck Women in Technology Futurist honoree, closes three decades at the station having helped lead it through fundamental changes through an abundance of patience, communicative strength and intricate technical understanding. Above, a couple of champions: Donna Stewart with Billie Jean King in San Diego. Register for TVNewsCheck’s Women in Technology Awards presentation and Technology in a Changing Media Ecosystem webinar with the winners here.
By Jennifer Pallanich | October 5, 2021 | 5:44 a.m. ET.

Rather than letting technology put her out of a job, Donna Stewart got curious about it.

Stewart, who recently retired as the news operations manager at NBCUniversal Local-owned KNSD San Diego, helped evaluate and select new technology for the station and train staff to use the new systems.

For that effort, as well as her talent for managing people, Stewart is one of TVNewsCheck’s 2020 Women in Technology Futurists along with Annie Chang, VP of creative technologies at Universal Pictures. The pair will be honored in a panel discussion with all of the Women in Technology Award winners on Oct. 12 at 1 p.m. ET.

When Stewart first started in the news industry, she worked on a Sony 200 editing machine, which was much slower than the “zippy” Sony 800 machines. After she joined KNSD, she worked on an editing machine that had a switcher and all the bells and whistles. Those have since been replaced with digital editing systems.

“The art of editing kind of went away. I was using ones and zeros to make these effects happen,” she says. “You learn to love that.”

Stewart, a self-proclaimed late bloomer, decided to obtain a college degree rather late in her career. At first, she considered journalism since she’d been in the field for so long, but realized her real-world experience far outweighed what she was likely to learn in a classroom.

On the other hand, she had seen tremendous changes in technology over the years.

She learned about IT “from scratch” through the University of Phoenix. She learned the language of computers and was able to understand conceptually how things worked, she says.

Stewart attributes her willingness to enter college when she was nearly 50 years old to the example her mother set. Her mother went back to school when she was 40 and became a learning disabilities expert.

Jerry McCormick, who is now the senior PIO for the City of San Diego but who first met Stewart through their membership in the San Diego Association of Black Journalists and later became her colleague, says Stewart’s decision to go to college so late in life boosted her career.

“She was successful in the career without a degree, but the degree made her more successful and gave her the confidence to pursue more and reach higher,” he says. “You’re never too old to learn. The industry is constantly changing, and you have to change with it.”

From the outset of her career, Stewart has taken advantage of the opportunities that came her way. Her entry into the news industry followed a Phoenix TV station’s visit to her school, seeking interns.

She’d always been interested in media, she says, but had expected to pursue a career in radio. That internship was the start of her broadcasting career. Over the years, opportunities fell into her lap, including the chance in the late 1980s to work at KNSD.

“I thought I’d be here three years,” she says.

She found she liked the team, which featured a variety of people with different skills and personalities and stayed.

“We just all mesh,” she says. “The one common denominator is everybody just wants to do a good job.”

She became a “lifer” and worked her way up through the ranks becoming supervising editor in 2005 and news operations manager in 2007.

“Here I am, finishing my career at the only station I’ve worked at in this town,” she says.

Greg Dawson, VP of news at NBC7/Telemundo 20, worked with Stewart for 30 years.

“She’s relentlessly positive,” he says. “She is someone who has always embraced change.”

Change often scares people, he says, so many resist it.

“We’ve gone through so many changes in this business in the three decades we’ve worked together,” Dawson says. 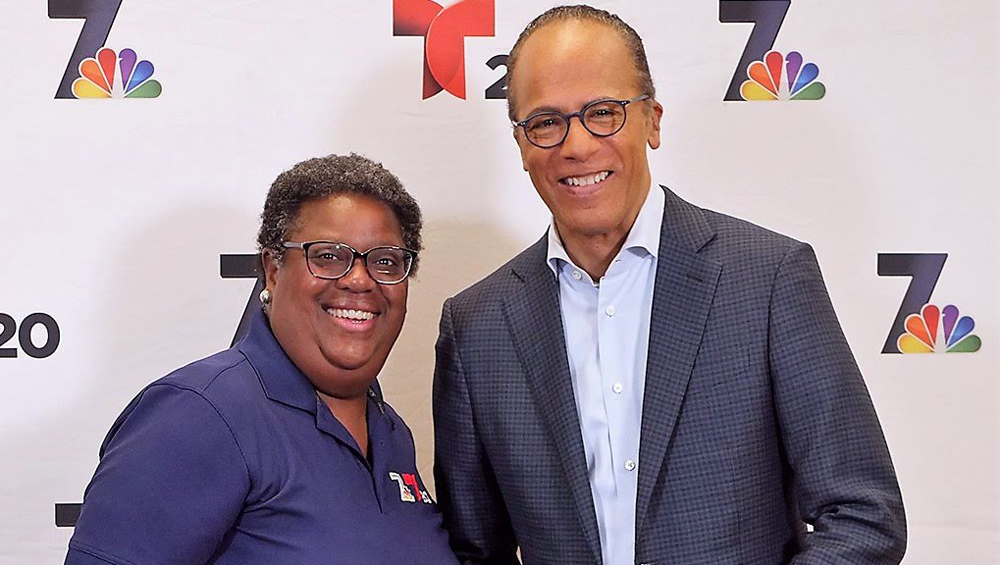 And at every step of the way, he says, Stewart was focused on figuring out how to make sure the change — whether technology or personnel — would work for the station.

“She was a champion of change over and over and over,” he says. “We’re known as a station that has embraced technology and implemented these things pretty smoothly and seamlessly compared to other places, and I think a lot of that is due to Donna’s leadership.”

She also took the lead in the station’s conversation around diversity and inclusion, he adds. “She was an important leader in our newsroom around those issues,” Dawson says.

And, according to Jade Kurian, Latakoo COO and one of TVNewsCheck’s two Futurist honorees from 2020, Stewart is “one of those people who makes an impression on you. She’s equally smart and equally patient.”

Patience can be rare, especially when it comes to technology issues and deadlines, Kurian says.

“She’s one of our favorite people to work support issues with,” she says. When there’s a problem, “she takes it step by step and works with us.”

Kurian attributes that to Stewart’s understanding of the intricacies of technology, patience and ability to communicate effectively.

Stewart says she treats people with respect and the way she wants to be treated. “That goes a long way in establishing those relationships,” she says.

In addition to her instinct to treat others with respect, she has learned a lot from other managers and from training provided by NBC.

“I fight for my team, but I also know what’s fair,” she says.

She also made sure she listened to her team.

She “can’t even imagine where we’re going to end up based on where we started” in terms of technology.

“Everything is getting more compact and integrated, so you’re not having as many systems. One system can do multiple things that are required to put a newscast on the air,” she says.

All these advancements make it easier to tell a story, she says.

Equipment has “gotten so much smaller” making it “possible for our photojournalists to do their jobs without breaking their backs,” she says.

It’s exciting, she says, to see these changes happening. As she was retiring, KSND was in the process of replacing a 20-year-old system with Dalet Galaxy, and she was “bummed” she wouldn’t be around for the launch.

Those entering the industry or seeking to move up would do well to keep an eye on technology trends, figure out where the future is going and see what they can do to contribute to that, she says.

“Folks are willing to talk to young people and share their wisdom,” Stewart says.

To read the profiles of TVNewsCheck’s other 2021 Women in Technology Award winners, click here.