The annual consumer electronics bazaar offered an important stage for fledgling NextGen TV this week, while also allowing varied glimpses at 5G, anticipatory technology and acres of beautiful new screens including the Samsung Sero that shifts from a horizontal to vertical perspective.
By Michael Depp | January 9, 2020 | 10:41 a.m. ET.

LAS VEGAS — NextGen TV may not be bounding toward a nationwide rollout, but it took some small, more certain steps toward that reality this week at CES.

For the first time, the newly-rebranded ATSC 3.0 had a presence on the show floor, and by Tuesday morning its booth was cheek to jowl with attendees. Many of them, from curious consumers to Chinese set manufacturers had the same, simple question: What is this?

It helped that they could see it for themselves via an actual ATSC 3.0 transmission of Sinclair Broadcasting’s Las Vegas NBC affiliate KSNV from nearby Black Mountain.

And there were plenty of people from ATSC, the Pearl TV consortium and Sinclair’s ONE Media on hand to patiently explain what is, frankly, not the easiest technology to synopsize in a quick, snappy way to the uninitiated. 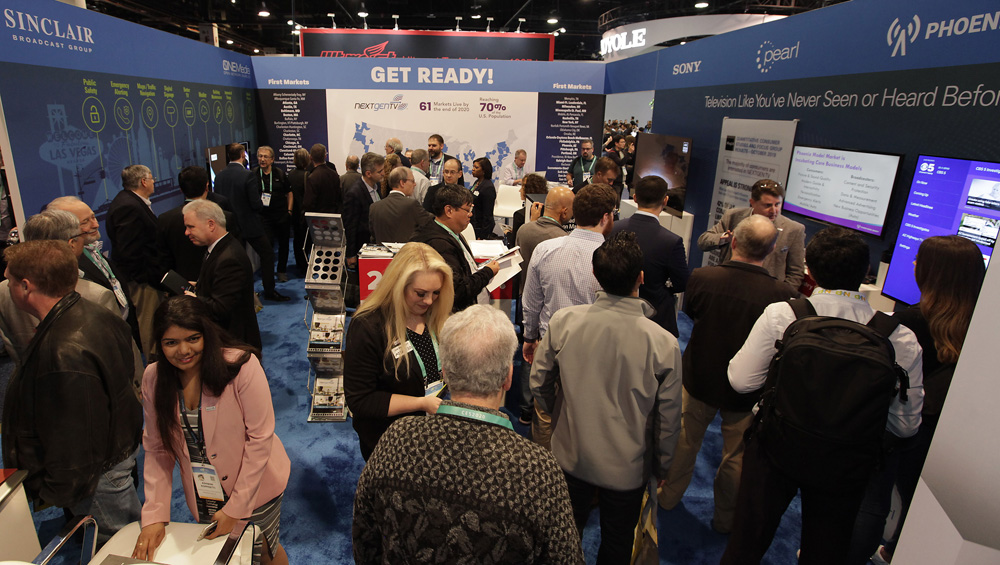 ATSC’s NextGen TV booth attracted plenty of visitors who could see the new technology for themselves via an actual ATSC 3.0 transmission of Sinclair Broadcasting’s Las Vegas NBC affiliate KSNV from nearby Black Mountain. (David Arland photo)

But for some important booth visitors like FCC Commissioner Brendan Carr, who dropped in while this reporter was there, such explanations are laying important track as NextGen TV shifts gears from a technology solution into what Sinclair SVP-CTO Del Parks calls “the operational phase of 3.0.”

NextGen TV’s most tangible announcement came earlier this week with its new “20 in 20” mantra signifying the first consumer TV receivers equipped with NextGen TV capabilities from Samsung, LG and Sony hitting stores later this year. A coming out party wouldn’t have been possible this year without some actual sets headed to market, and that gave NextGen TV’s proponents some much-needed wind in their sails.

That wind helped carry a presentation from ATSC President Madeleine Noland, NAB President-CEO Gordon Smith and CTA President-CEO Gary Shapiro, who cheered on the technology in a brief session on Wednesday morning.

“Seeing the products at CES is so important,” Shapiro said. “It didn’t always appear that it would occur because there are so many roadblocks. We’ve come a long way on the road to NextGen TV.”

There’s still plenty more road ahead for it.

Privately and off the record, some insiders expressed concerns that number was overly optimistic.

Perhaps more accurately emphasized was the public narrative of broadcasters (or most of them, anyway) finally standing shoulder to shoulder on the new standard.

“The broadcasters are moving forward with unprecedented cooperation and collaboration to deploy the revolutionary new technology while preserving today’s TV broadcasts,” Noland said.

“I’m very happy to say the broadcasters are very much behind this,” NAB’s Smith echoed. “There’s a momentum that cannot be stopped.”

Maybe so, but that momentum won’t be extending to any announcements, at least here at CES, as to which markets will light up next and when. ATSC and Pearl TV officials indicated those announcements won’t be forthcoming until the NAB Show in April. 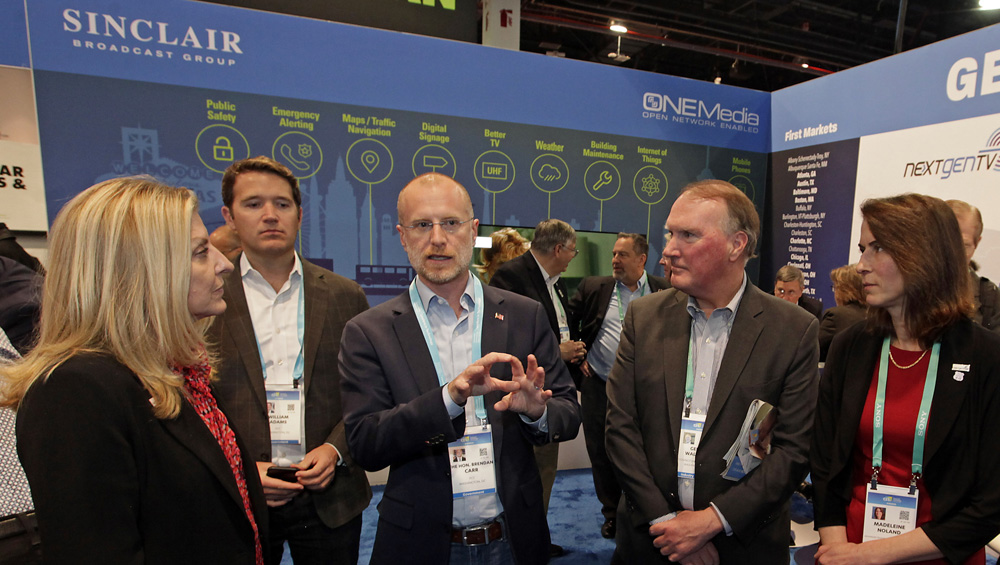 Back at the NextGen TV booth, Sinclair’s Parks was rolling up his sleeves to do the hard, minute work of the collaboration that comes next.

“We know it’s not a science experiment anymore and we have to be able to deploy,” Parks said. “One of the main principles for that deployment has to be cooperation. It’s operational integration.”

Sinclair has been NextGen TV’s John the Baptist from the outset and has been steadily working to convert skeptics in the broadcast community. Parks knows that holding back on announcing next steps for the rollouts isn’t helpful to the cause. But even though the key players know which markets are next, announcing them isn’t that simple.

MVPDs, for instance, need a 90-day period of notification if ATSC 1.0 signals are going to be moved around to create space for 3. 0 spectrum, and NextGen TV players need permission to do that.

“We have to have a lot of transparency in how we do that,” Parks said. “And before we make announcements it’s important that we have all of our partners in agreement. It’s never just a Sinclair or Nexstar or Tegna. It’s all of us together in a market.”

To Parks, the remit is clear: “It’s crawl, walk, run,” he said. “Let’s get as many markets on the air in the next 18 months [as possible] so that as people buy these televisions, there’s something for them to watch and the consumer electronics companies understand that we are committed to this.”

NextGen TV is only a sliver of the narrative at CES. Once again this year, 5G holds heavy sway despite the fact that most consumers have yet to see any tangible delivery of its promises from previous shows. 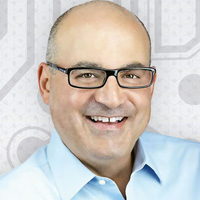 “5G is an inevitability,” Palmer said. “We will live in a 5G world” of low latency and high bandwidth. The problem is “this is hundreds of billions of dollars of infrastructure and all kinds of politics.”

While Palmer believes 5G will be an industrial and consumer game changer, “what’s not inevitable is it will be here next year,” he said. “I wouldn’t put it in my three-year plan if I’m building a business.”

Meanwhile, 5G has one of its biggest cheerleaders in FCC Chairman Ajit Pai. Pai’s default high level of animation became even more radiant when the technology arose in a conversation with CTA’s Shapiro.

“The future is very bright for 5G in this country,” Pai said. “We want to promote American leadership in 5G.”

Pai also spoke to the impediments to 5G’s realization here, among them cost and sufficient access to spectrum. On the spectrum front, he sees a solution forthcoming. “Our goal is to remove spectrum as one of the restraints on unlicensed innovation,” he said. “I’m very confident we’ll be able to do that in the coming year.”

Another key impediment to 5G is having enough workers who can do the actual job of building the infrastructure for it.

“The job is extremely demanding,” Pai said, describing his own experience of climbing towers with the workers who have to scale much higher than he’s gone himself, all the while lugging heavy tool sets and bracing against powerfully buffeting winds.

The U.S. will need to build a future workforce around those challenges, Pai said. The motivation: the payoff won’t just be for urban and suburban beneficiaries of the technology but rural areas such as from where he hails, where precision agriculture and telemedicine will be essential use cases.

The internet of things (IoT) continues to be an important strand of CES’s narrative with a heavy show floor presence. While much of it is peripheral, at best, to broadcasters it’s useful to see how it may color consumers’ lives going forward, especially as artificial intelligence plays a larger role in so many devices.

One panel on Tuesday looked ahead to a not-far-off world of “anticipatory tech,” much of it centered on smart homes that will be getting even smarter. “In a few years, things will happen for you that you did not ask to happen,” said Lindsey Turrentine, SVP of content strategy for CBS Interactive Tech Sites.

In-home cameras with facial recognition will pair with verbal data from smart speakers and data from sources like digital calendars and maps, fueling predictive analytics that may result in any number of outcomes. Reading via maps your location on the rush hour drive home, for instance, your home may turn on your smart oven to get a jump on dinner.

Michele Turner, senior director of product management for the smart home ecosystem at Google Nest, sees it all culminating in anticipatory tech’s effort “to streamline how my world comes together in a very busy part of my day.”

Brand implications might extend to a drive-through restaurant changing up its menu offerings on reading your face. As you drive up, that menu could recalibrate what you see based on your past choices and aversions.

As with all such ever-deeper incursions of smart technology into our daily lives, red flags rise as well. “There’s a lot of sunny talk here,” said Cindy Cohn, executive director of the Electronic Frontier Foundation, throwing some cold water on technologists edging for an ever more symbiotic world with AI. Cohn cautioned we have to think more defensively of how we’re going to build such systems in this anticipatory world considering all the ways our personal data will be even more vulnerable to both law enforcement and predators alike.

“AI is fully commoditized,” Palmer said. “Anybody who wants to add artificial intelligence to their models, go ahead to Amazon and rent it.”

And as for AI’s incursions into our professional lives as well, Palmer noted “data is the thread across human beings and machines.” Going forward, he said, we’ll need to ask ourselves “are you a good AI co-worker?”

Palmer’s event offered up another nugget worth mentioning to broadcasters on the more tangible front of new TV sets. It’s easy to get snowblind from the number of sets on display at Central Hall in the Las Vegas Convention Center. Dazzling new displays greet attendees from the moment they walk through the hall’s entrance, and LG’s cascading undulations of curved screens through an increasing number of 4K and 8K offerings inside.

While all offer breathtaking resolution and sound, Samsung had one novel model that Palmer previewed in conversation with Grace Dolan, the company’s VP of home entertainment marketing. The Samsung Sero shifts automatically from horizontal to vertical display mode with the screen actually rotating (the name means “vertical” in Korean).

So much content is now being created in vertical format, but Palmer noted that until this set there had been no outlet other than a phone display for it.

“We can’t change the way consumers behave,” Palmer said, “but we can change technology to meet their needs.”