Back to TVNewsCheck Home Print this page
CES 2020

For many broadcasters, NextGen TV took up much of last week’s CES show’s oxygen in a series of announcements and presentations. But industry leaders shouldn’t miss what may have been the most tectonic, tangible announcement in Las Vegas: NBCU’s groundbreaking new One Platform, which simplifies the ad buying and selling process across any screen.
By Michael Depp | January 13, 2020 | 5:44 a.m. ET.

LAS VEGAS — CES heaved its last, exhausted sighs last Friday here, leaving broadcast technologists a welcome chance to catch their breaths before some head off to the Mobile World Congress in Barcelona next month.

For many broadcasters, NextGen TV took up much of this show’s oxygen in a series of announcements and presentations. They culminated in a panel Thursday positing “What NextGen TV Means To Technology,” though its title might’ve been more honestly rephrased to what NextGen TV could mean to technology given the industry’s best laid plans come to pass.

But industry leaders shouldn’t miss what may have been the most tectonic, tangible announcement at CES: NBCUniversal’s groundbreaking new One Platform, which simplifies the ad buying and selling process across any screen.

The move irrevocably acknowledges an essential truth about audiences, neatly put by Linda Yaccarino, chairman, advertising and partnerships, NBCUniversal, in the announcement: “We know that viewers do not differentiate content by network, time or screen; instead, our fans see NBCUniversal as one giant home to the best stories, so that’s the mindset we’ll go to market with in 2020.”

Streaming will invariably be a huge part of that market, and CES offered some further insights for broadcasters to keep in mind as more of their attention turns to OTT strategies this year.

The substantive part of NextGen TV’s narrative yielded to pageantry at CES once early announcements had come from set manufacturers LG, Sony and Samsung that 20 of their new respective models would be NextGen TV-ready this year. 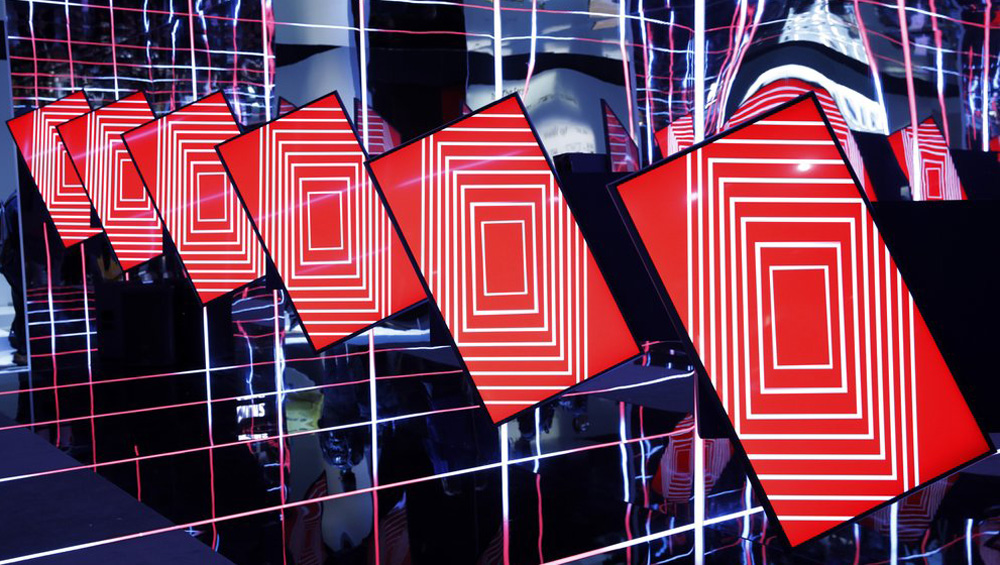 Samsung Sero TVs on display at the Samsung booth during the CES tech show, Jan. 7, 2020, in Las Vegas. The TVs can rotate to play vertically or horizontally. (AP Photo/John Locher)

But some of its next chapter was anticipated in a Thursday panel that brought together some key ringleaders. Behind the scenes, the Pearl TV consortium is focusing on interoperability in its latest model market tests. On the consumer side, Anne Schelle, Pearl’s managing director, said viewers have been most impressed by the enhanced audio and video they’ve experienced while watching.

To that point, set manufacturers are hoping to lure an initial high-end market with their NextGen TV-ready offerings, premium QLED and OLED models ranging from 55- to 85-inch screens. “These are the early adopters,” said John Taylor, SVG of public affairs and communications at LG Electronics U.SA. “They want the latest and greatest.”

But NextGen TV will ultimately live or die based on widespread consumer adoption, and that will mean getting it to the screens beyond TV sets where viewers are increasingly aggregating. So what’s happening on those other fronts?

Schelle said that dongles, set-top boxes and gateways are the likeliest next devices. Autos will be an important area, not just for the obvious “infotainment” possibilities, but also NextGen TV’s potential use as a conduit for software upgrade data. Heavily computerized new models need regular updates, and circumventing a need to take them into dealerships to do so would be optimal for many dealers and drivers. “We’re a much cheaper pipe in terms of delivery,” Schelle said.

But that still leaves what may be NextGen TV’s most crucial front: smartphones. The technology’s biggest advocates acknowledge that carriers aren’t going to install the chipsets into new phones without consumer demand for them. A potential government mandate to put the chipsets in phones could change everything, but the panelists sidestepped a question from TVNewsCheck as to whether they’d lobby for one. LG’s Taylor said after the session that they weren’t interested in a mandate.

Instead, Schelle offered, “There are other ways to enable viewing on devices like phones.” ATSC President Madeleine Noland emphasized that the technology wasn’t just an American standard, and that the mobile phone environment differs widely from country to country. In South Korea, for instance, she described looking over the shoulder of a fellow metro passenger to watch a live baseball game with an impeccably sharp picture. She noted the impediments to carrying NextGen TV over to mobile phones were much fewer in the market there. Here in the U.S., Noland said, “We need to score with television consumers, and then we’ll see.”

NBCUniversal had by far the biggest broadcast presence at CES, namely owing to its One Platform announcement and a celebrity-studded panel Wednesday that served to reinforce a key message: the network has accepted the religion of audiences anywhere and anytime into its heart.

“With One Platform, we’re following our viewers’ lead,” Yaccarino said in its announcement. “Rather than rejecting the changes in consumer behavior, we’re reflecting it. And rather than pushing back on disruption, we will use it to power our business and redefine the entire marketplace.”

On stage flanked by the network’s stars including America’s Got Talent’s Terry Crews and This Is Us’ Mandy Moore, Yaccarino drove the point further home. “We know the consumer is in the driver’s seat,” she said. “We know you’ve been liberated from that big screen in your home.” 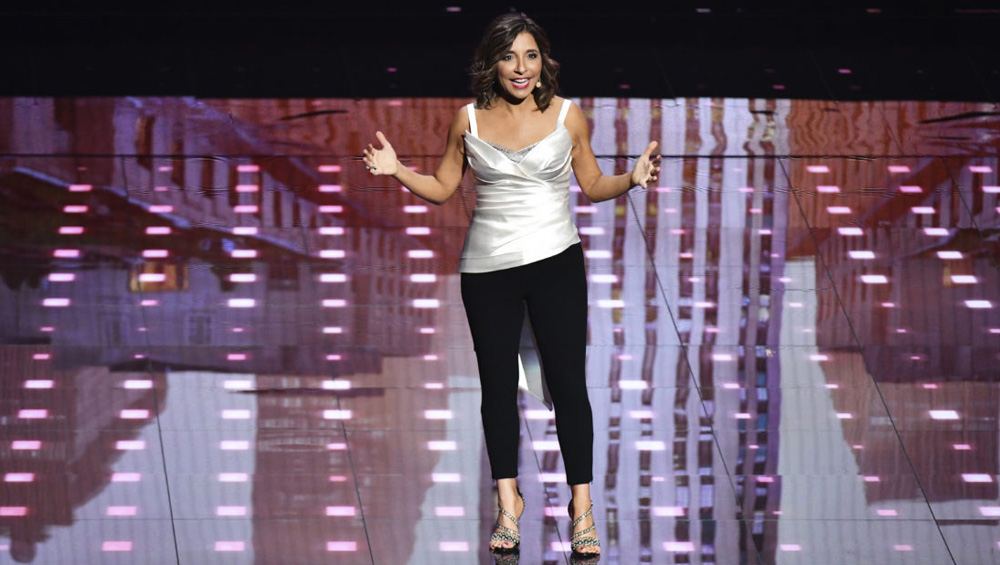 Given that, Yaccarino pledged that NBCU’s 110,000-plus-hours of original content in 2020 will come to consumers in whatever way and whatever screen they wanted. A day earlier, the CW Television Network offered an illuminating OTT insight of its own on a different stage at analyst Shelly Palmer’s Innovation Summit. Mark Pedowitz, CW’s chairman-CEO, described the unlikely path through which the broadcast network became a multiplatform network, thanks entirely to streaming and largely to Netflix.

Only a few years ago, CW’s audience was starkly divided in a 70% female/30% male split. It needed to bring men back into the fold, and that begat a slate of superhero shows that were inherently bingeable, a practice not possible until streaming. CW offerings such as The Flash, Riverdale and Supernatural soared on Netflix, and clever marketing drew now-loyal audiences back to the linear network for new seasons. The lessons learned there sharpened CW’s mindset about going to any place its viewers were and then listening closely to them on social media, too.

That listening gave a second life to a recent show, All-American, that follows a young Compton football player’s recruitment to Beverly Hills High. The show languished on air despite high expectations from the network. On Netflix, however, viewers loved and binged it, clamoring for more on social media after hearing noises about its potential cancellation. Pedowitz and his CW colleagues heard the streaming audience’s social media outcry and followed through with a second season that was promoted directly to All-American’s ardent Netflix viewers. The result was a dramatic uptick in viewership on both CW’s digital channels and on its linear broadcast.

The moral: All-American had a tribal, findable audience and CW was attuned to it, using streaming platforms and the data they yielded to perserver with a solid show.

The case study gave credence to an understanding about streaming that seems all-pervasive now. Terry Crews attested to it in NBCU’s presentation, suggesting that even broadcast’s biggest personalities know what streaming has come to mean.

“When you look at what streaming is, it’s power. It gives you power,” Crews said. “Because of streaming, we will probably be more popular in 15 years than we are now.”