Aiming to capitalize on the holiday shopping season, broadcast consortium Pearl TV is launching a major marketing campaign for NextGen TV (also known as ATSC 3.0) on Nov. 26 in the 34 DMAs where NextGen TV stations are on the air.

The new campaign from Pearl TV, which counts more than 750 stations and nine of the largest station groups in its membership, will run through Jan. 30 in big markets like Atlanta, Houston, Orlando and Tampa. It represents a significant ramp-up from last year’s brand awareness campaign, which only ran in six markets. While the 2021 campaign will replay some of the same creative, including a spot explaining the overall benefits of NextGen TV sets, it will also include new spots from audio technology giant Dolby that emphasize the audio benefits that come with 3.0.

“We’re excited, because it will be much more national in its rollout,” said Pearl TV Managing Director Anne Schelle. “All of the stations are participating and promoting based on a suggested GRP [gross rating point] schedule from Black Friday through Jan. 30, gearing up for the Super Bowl. There are a lot of TVs bought between Christmas Day, because of the sales, all the way through January.”

The nine-week NextGen TV campaign will be run from promotional spot inventory across the Pearl TV stations in all of the on-air 3.0 markets and will be supplemented with advertising on station websites and social media platforms. So far, Facebook has been particularly effective as a marketing tool for NextGen TV, Schelle said.

One spot, “Dialogue Drama,” shows a family sitting on a couch and eagerly awaiting a plot reveal in their TV drama, only to have it rendered inaudible by blaring background music. It then replays the scene and shows how Dolby’s “Voice +” technology makes the dialogue easy to hear. Another spot, “Sound Surprise,” depicts a sleeping grandfather sitting alongside his family who is jolted awake when the channel is changed; the scene is replayed using Dolby’s loudness control technology and Grandpa keeps snoozing through the channel change. 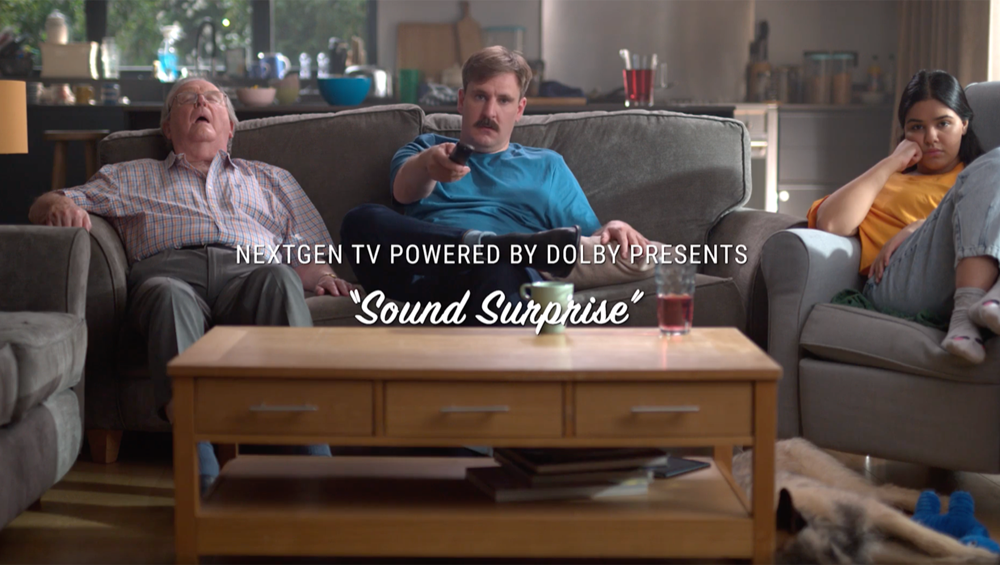 No TV set manufacturers or electronics retailers are currently paying for their own spots advertising NextGen TV sets on local TV stations. But two Pearl TV stations currently on-air with 3.0 have reached co-op agreements with local retailers to sponsor programming, including a technology show and a lifestyle show.

Schelle said Magid research shows that last year’s promo effort for NextGen TV lent a “halo effect” to TV stations whereby consumers saw them as being innovative. It also helps “condition” consumers for future applications and services that stations will only offer through NextGen TV, she added.

Broadcasters’ expanded consumer marketing effort reflects the progress of the overall NextGen TV rollout. Thirty-four markets (and 46 total cities) are now on air with 3.0 signals, representing coverage to 35% of the country. Twenty more cities, including Los Angeles, are expected to launch by year-end, representing 45% of the country. Another 40 markets are planned to start broadcasting 3.0 in 2022, including top-10 DMAs New York, Chicago and Philadelphia, with perhaps 75% coverage reached by next summer.

(The stations currently on-air are simulcasting their 1.0 programming in 1080p with standard-dynamic range; some HDR and perhaps even 4K content should come in 2022 pending upgrades in networks’ distribution systems.)

The 3.0 TV set universe is growing as well, with 70 models from Sony, Samsung and LG available at electronics retailers like Best Buy and big-box stories like Costco. And more manufacturers are expected to introduce NextGen TV sets in January at the CES Show in Las Vegas.

While manufacturers like Samsung highlight the NextGen TV reception capability of sets on their websites, it is hard to find any mention of NextGen TV today on the websites of retailers like Best Buy and P.C. Richard, even when drilling down into the technical specifications for individual models. To make shopping for 3.0-capable sets easier for consumers, Pearl TV has created a “NextGen TV Holiday Gift Guide” that is available at www.watchnextgentv.com and which lists select models from LG, Sony and Samsung.

Sony, which has incorporated NextGen TV reception into all of its 2021 TV models, has led the way in marketing the technology to retailers by promoting it at kiosks which run the NextGen TV “sizzle reel” from the Pearl TV website, said Schelle. The company has also produced a training video to educate retailers about NextGen TV’s benefits.

Pearl TV will be focusing on retailer education at CES in January.

“Part of our big push at [CES] is to get retailers educated,” Schelle said. “Because we’re doing this big campaign, consumers are going to be walking into stores asking about NextGen TV.”