Lisa Pedrogo is one of the “get it done” women at CNN.

Pedrogo, VP of New York engineering and strategic initiatives at WarnerMedia Global Broadcast Technology Services, helped manage the design, build and move of CNN into its new IP-based Hudson Yards broadcast facilities, which are completely based on the SMPTE 2110 IP standard.

Previously, she helped manage the build of the Time Warner Center in New York and rebuilds of facilities in London and Los Angeles. Under her leadership, CNN’s BEST University created new television workflows and technology strategies.

These efforts have won her the recognition of TVNewsCheck’s 2020 Women in Technology Leadership Award, which will be presented to Pedrogo and fellow honoree Barbara Lange, executive director of SMPTE, in a ceremony during the NAB Show in Las Vegas on April 21.

The Hudson Yards project was undertaken to consolidate WarnerMedia’s CNN, HBO, Turner Broadcasting and Warner Bros. divisions under a single roof for the first time. WarnerMedia has about 1.5 million square feet of office space at the 30 Hudson Yards skyscraper in New York City.

Being the first major broadcast facility based completely on the 2110 standard, the three-year-long Hudson Yards project would face unprecedented challenges.

So CNN went to its “get it done” person, Pedrogo says.

She recalls meeting with her boss, Bob Hesskamp, EVP engineering for WarnerMedia, in a restaurant to discuss her career and this opportunity several years back.

“He told me: ‘Every year you come up in our executive conversations about being a leader, and you’re not leading. I want to put you in a position to be the leader you are,’ ” she says.

“I’m not even an engineer. What’s going to make these guys want to work for me?” she says. “And he said, ‘If they don’t want to work for you, that can be arranged. I can backfill those positions from Atlanta with people who do want to work with you.’ ”

So in 2016, Pedrogo took over the challenge of managing the Hudson Yards project, and the facility went live in 2019.

Michelle Masali, director of broadcast engineering and systems technology for WarnerMedia, says the Hudson Yards project was nothing like building out Time Warner Center because it was the first time moving into an IP facility in New York.

“The technology completely changed for us. We had to reinvent how we did things, and we relied heavily on vendors to meet deadlines to get their technology working for us,” says Masali, who’s known Pedrogo for 24 years. “Timelines were changing, infrastructure wasn’t ready, the building wasn’t ready, or the vendor wasn’t ready. You name it. It happened.”

Despite all the obstacles, Masali says, Pedrogo kept her head cool.

She was also very hands-on.

“Her team wasn’t just on the sidelines for the ride for the build,” Hesskamp says. “They were a key part of the build and crucial to our success.”

Pedrogo’s team carried out “the biggest load of the configuration on the IP infrastructure and IP routing,” he says. The team was so familiar with the system that “they were ready to support it close to day one.”

Andrea Wilson, a senior business coordinator at CNN/WarnerMedia, says during the Hudson Yards project, Pedrogo put in long hours — “early morning, late at night, and even the weekend. She got the job done.” 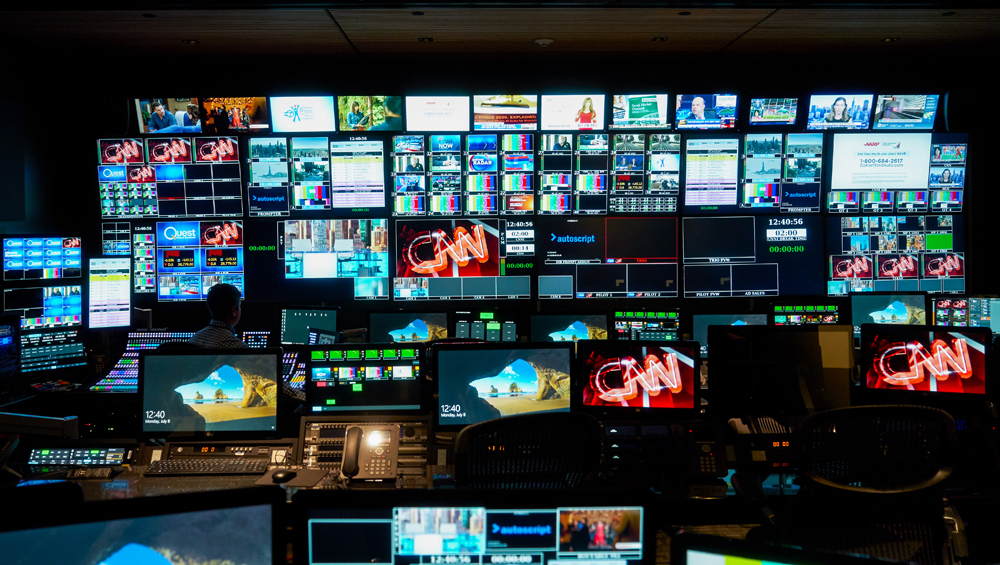 Lisa Pedrogo managed CNN’s Hudson Yards installation, an IP greenfield project. This is one of the production control rooms. (Photo by John Nowak)

Pedrogo says the job couldn’t have been done without the combination of a stellar team and support from management.

“My upper management was pretty much ‘let Pedrogo do what she does until she asks a question, then answer it and let her get back to it,’” she says. For the Hudson Yards project, she was “CNN’s voice at corporate, saying, ‘This works for us’ or ‘This doesn’t, and this is why this doesn’t work for us.’ They gave me what we asked for.”

One of the reasons she was so successful with that is because she’s such a skilled communicator.

“She does a great job of explaining complex things in a way our teams understand,” Hesskamp says.

She also has a way of bringing out the best in her teams, says Rob Fox, manager for broadcast and IT engineering at WarnerMedia. He wasn’t working at the company at the time the project started, so Pedrogo brought him in as a consultant. He has known Pedrogo since 1995 when he was Avid’s site manager for building out the editing and playout system at CNNfn.

Because they both had to be on site all the time, Pedrogo got a desk for Fox in her own office so he would have a comfortable place to work.

“She was working for a company like CNN and I was being treated that way as a vendor. This is the kind of person I want to do a good job for all the time,” he says.

Fox says Pedrogo has a way of surrounding herself with smart people and trusting them to do their jobs.

In short, she says, she tries to meet people where they are on any given day and to remove impediments from their path so they can execute their work.

“We’re human. People do make mistakes. We deal with them and move on. If they do something wrong, we talk through it. If it continues, that’s a different conversation,” Pedrogo says.

Masali says Pedrogo “cares about everyone succeeding” and often takes people under her wing to help them mold their careers.

“She’s always helped me with my career, even when she wasn’t my boss,” Masali says.

Pedrogo says her own career has followed a “crazy trajectory” but that you “have to earn your path.”

After earning a B.A. in communications from Hofstra University in December 1988, she entered the broadcast industry as a production assistant for CNN’s Business News in New York in 1989. Promoted three times during her first year, she has held most of the editorial positions available at CNN. She later switched over to technical management. She managed CNN’s first digital, non-linear edit system for CNNfn. She found she liked the work and rose to director of operations for CNNfn in 1996.

After a brief stint in another industry, she returned to Turner. She managed the technology training for CNN worldwide as well as CNN’s Broadcast Engineering & System Technology (BEST) University. She was a project manager for the New York Time Warner Center, Abu Dhabi and CNN Miami facilities. She was the program manager for CNNI London Bureau, CNN HD network launch and Los Angeles Bureau renovation.

“I was taking on these big projects and making them happen,” she says. “I’m the get it done girl for this organization.”