News organizations are increasingly using breakthroughs in technology to allow journalists to remotely, yet quickly, deliver more content over multiple platforms. The advances range from improved cellular networks that speed transmission of content from the field to the newsroom and cameras capable of streaming and providing remote video, to a host of tools available for journalists to remotely edit and produce content while collaborating with their newsrooms. Above, Grass Valley’s new GV Alyve, released at this year’s IBC Show, gives reporters a “virtual control room in the cloud” for production and distribution of video and livestream content. (Source: Grass Valley)
By Jennifer Pallanich | November 21, 2019 | 11:34 a.m. ET.

Remote production technologies are revolutionizing how broadcast news organizations like E.W. Scripps, Gray Television and Tegna serve up content to their viewers.

Gone are the days of reporters in the field working without access to graphics or footage stuck in an on-premises asset management system. News organizations are increasingly using breakthroughs in technology to allow journalists to remotely, yet quickly, deliver more content over multiple platforms.

Such technological advances are increasingly evident, starting with improved cellular networks that speed transmission of content from the field to the newsroom and cameras capable of streaming and providing remote video.

Then there are software tools, workflows and asset management systems that enable real-time field collaboration with the newsroom and access to centralized resources.

The result: more sophisticated pieces than before, completely produced from the field.

As Socrates Lozano, senior director of OTT at E.W. Scripps puts it: “Production used to take a long time,” but new technologies have “freed us and allowed us to work a lot faster for our viewers.”

While the latest tools and technologies speed up the remote news production process, broadcast organizations continue to seek solutions that streamline operations, are simple to use and reduce costs.

Remote production capabilities have improved over the last decade thanks to the increasing reliability and speed of content transmission via products from companies like LiveU and TVU, says Glen Hale, Gray Television’s director of digital content and audience development. 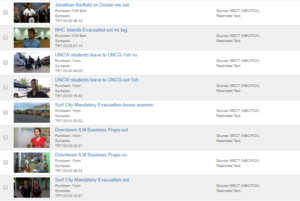 But Hale acknowledges cellular networks are not foolproof. Even when cell coverage is planned for a large-scale event, too much demand can strain the service. With a true breaking news situation, Hale adds, “cell networks quickly get overloaded. There’s a little technology gap there, but it’s getting better.”

Another vendor, Dejero, offers the GateWay appliance, which is a router that uses cellular blending technology to transport video. It also gives the field team access to the media asset management system.

Yvonne Monterroso, Dejero’s director of product management, says portable connectivity tools like GateWay make it possible for news organizations to extend coverage to more types of events, even simultaneously, as used by Crocmedia in Australia.

Many, including Monterroso, believe connectivity will improve further as the 5G network rolls out across the markets.

“5G is something we are paying close attention to,” Monterroso says, because it will “enable higher bandwidth rates. We will see need for blending more than ever.”

But transmission isn’t just about sending components or even completed packages to the station. Cameras can stream low-res versions of footage from a live shot back to the station.

Lozano says “it’s remarkable” that connected cameras can have video back to the station within 30 seconds. He says one Scripps team was covering a wildfire in California and was able to “flip one switch” to connect the newsroom with the livestream and FTP the video. A crew from a competing station, meanwhile, was “stressed out trying to coordinate feeding the video back” to their station. 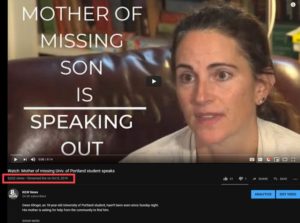 Steve Cooperman, senior product manager for broadcast, cinema and pro video at Panasonic System Solutions Co. of North America, says the company’s P2 cameras feature the full P2 Cast workflow, which allows the shooter to simultaneously record high-res video and a low-res proxy. This feature can help a broadcaster get to air first with a story, he says. “In some ways, our proxies are better than the quality of cameras 10 years ago.”

In the near future, once the video is in the cloud on a platform like Amazon Web Services, the station can also take advantage of web-based services like transcription, Cooperman says. P2 Cast allows the newsroom to connect to the camera and push data, including the newsroom computer system (NRCS) file names, he adds.

Cameras are increasingly able to do more than capture video and stream content; they can add graphics to video and display return video, notes Joe D’Amico, VP of JVC’s Professional Video Division.

With graphics inside the camera, D’Amico says, it’s possible to brand video in the camera without having to go through the station switcher, which is helpful for sending content to social media. The graphics program can also add ribbons and lower thirds, further reducing the previously required assistance from the station.

“It’s like taking the studio out into the field with you,” D’Amico says. 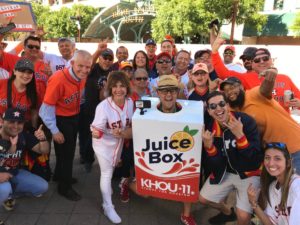 During the World Series, Tegna’s KHOU Houston sent out its “Juice Box” reporter, who used a phone to livestream events before and during the game and solicit messages from fans. (Source: KHOU)

At the same time, cameras need to be easy to operate for the two types of people who typically use them in the field: multimedia journalists and regular camera operators.

The MMJ tends to want a portable camera that “they point, and that’s it. They don’t want menus, and they like to use autofocus as much as possible,” D’Amico says, as opposed to the traditional camera person who “is a lot more versed in the camera itself and all that the camera can do.”

Camera designers are working on ways to streamline the video workflow for both types of users, D’Amico says.

Editing And Production From The Field

Once the video is captured, field journalists have a host of tools available for remotely editing and producing their content while collaborating with the newsroom.

But journalists in the field generally also need access to content that’s stored centrally in newsroom asset management systems to do that production.

Kevin Savina, director of product strategy at Dalet, says the Dalet Galaxy platform and Unified News Operation offering make it possible for a journalist in the field to edit material on a laptop, access content stored in the newsroom and mingle the material.

“Under the hood … we use some cloud technologies to be able to smartly synchronize that content,” Savina says.

The technology is new — Dalet showcased it at the NAB Show in April and released it at IBC this fall — and requires newsroom security to be “a little bit more open before” because it permits access to the newsroom via the cloud, Savina says.

Newsrooms traditionally have been “conservative in terms of security practices,” he says. “Now, they need to kind of make the culture change and learn how to securely open access to their back-end systems.”

A virtual private network (VPN) technology that permits secure access to the newsroom automation system is one such solution.

“We’ll take a completely finished product, short of supers, and upload that directly into the playout system using plugins in the ENPS,” Blount says.

And graphics are increasingly easier for field journalists to create and incorporate into stories, says Ray Thompson, director of broadcast and media solutions at Avid. Historically, a graphics artist needed to create them, he says, but now the artist can create both 2D and 3D templates that can be shared in a repository like MediaCentral. From the field, the journalist can locate it and customize it to the story.

“In the past you had so many people touching the content; now the journalist can do the top to bottom production of that story,” Thompson says.

LiveU’s Wireless At Home Production Solution makes it easier for networks to do high-quality production in the field with less equipment and fewer people, says Chris Perry, LiveU product manager.

The ability to produce the training programs remotely “saved them a lot of money and effort,” Perry says.

Scripps’ Lozano says the broadcaster worked with TVU for more than two years in beta testing to help refine the TVU Producer technology to meet a working newsroom’s needs. Now the organization uses TVU Producer “every day on social to push out streams and to our stations,” Lozano says.

Scripps also uses Frame.io, which allows newsrooms to connect with their reporters in the field in real time.

During editing and production, “everyone used to watch from one computer because they were all in one location. Now they’re spread out, in different stations, all across the country,” says Nicole Denne, senior director for national news at Scripps. Frame.io allows several people to collaborate remotely without the trouble of emailing comments back and forth. “It’s instantaneous and one piece of technology.”

Many products, services and technologies have improved to the point where journalists in the field need far less, or even no, production support from the newsroom.

As Tegna’s Sally Ramirez, news director at KHOU Houston, puts it: “Today it’s very easy to be remote” because of the lightweight equipment that is available to journalists on the go. “They can report, shoot, do live shots. They can do everything now by themselves.”

Even so, news organizations are always on the hunt for ways to better streamline the workflow.

One thing that Ramirez would like to see become available for KHOU is a unified asset management platform to simplify the multiple content management systems Tegna uses for web and television.

Greg Retsinas, Tegna news director at KGW Portland, Ore., says new remote production technologies should simplify what crews do in the field so they can spend more time reporting.

“Is the technology simpler than what we’re using?” Restinas asks. “Is there a cost? How do we factor it into the budget? Does it replace something we do?”

Lozano cites a specific bottleneck that slows down the ability for Scripps to “super serve” viewers with quality content faster: the creation of the actual story.

The ability to “create that quality content automatically would be awesome” as long as it “protects the human element that makes storytelling so great.”

Gray’s Hale would like to more easily drive viewers from social media platforms back to the organization’s own platforms, particularly since remotely produced content by Gray’s reporters to digital platforms has grown annually.

“Facebook Live gets so much activity from reporters and anchors in field because it is so easy to do,” Hale says. “As an industry, we need to get technologies in place that allow us to do that to our own platforms just as easily.”