The Society of Motion Picture and Television Engineers (SMPTE) is the latest broadcast technology organization to take its annual conference and exhibition to the internet due to the COVID-19 pandemic, following the NAB Show last spring and the IBC show this September.

SMPTE 2020, originally scheduled to be held this week at the Westin Bonaventure hotel in Los Angeles, has instead been recast as a virtual event aimed at a global audience. The conference, which began Tuesday and wraps up today, has tackled diverse topics such as broadcast standards, cloud production, AI, blockchain, 8K and esports.

To do so, SMPTE has used a mix of prerecorded keynotes and technical sessions, along with live Q&A sessions, roundtable discussions and social hours on Zoom, to reach attendees across all time zones. SMPTE has also created a virtual exhibit hall for 75 vendors and organizations, where attendees can learn about a company’s technology and also schedule a private virtual meeting with one of its executives.

“Because it’s virtual, everything is accessible for the life of the conference,” said SMPTE Executive Director Barbara Lange. “And if you want to meet with an exhibitor at 2 a.m. ET, you can do that.”

SMPTE decided to prerecord conference keynotes and technical sessions instead of doing them live via a videoconference platform like Zoom because it wanted to avoid quality issues due to poor internet connections and maintain a consistent look for the presentations. But the sessions have still been premiered on a “live” basis, to try to maintain the feel of a traditional conference, and speakers have been available immediately afterward for live Q&A via Zoom.

After their initial presentation, the sessions are available on demand, along with a wealth of additional content. And attendees looking to learn more about a particular topic can also schedule a one-on-one Zoom meeting with a subject-matter expert. 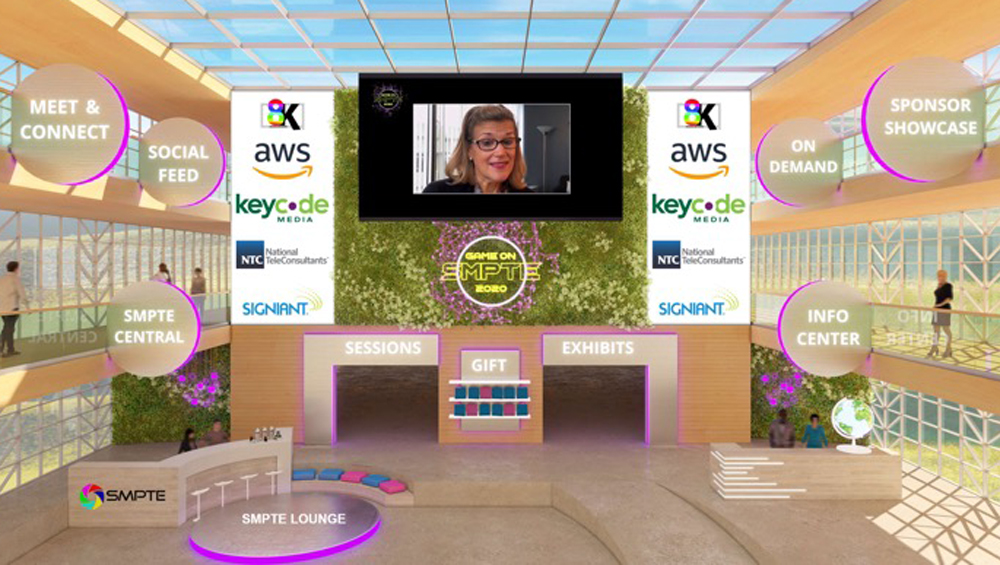 A typical SMPTE show usually draws about 2,000 attendees, with some 400 to 500 coming just for the conference and the exhibition drawing the rest, Lange said. SMPTE was targeting around 1,500 attendees for this year’s event, and as of Tuesday had more than 1,300 registered.

“We’re very optimistic about getting a global audience that wouldn’t have come to L.A.,” Lange said. “I think that’s going to be good for us.”

SMPTE’s original theme for this year’s conference was “Game On” to highlight the emergence of esports as a rapidly growing market segment for the professional video business, and the virtual nature of the revised show makes that a particularly good fit. The conference’s final day features an array of keynotes and sessions focused on esports, concluding with a live demonstration of an esports match between Team Liquid, a professional esports team from the Netherlands, and an amateur team from the Rochester Institute of Technology in the U.S. The teams will compete in a live Twitch stream of the game “Rocket League,” which combines elements of soccer and auto racing.

While esports is a viable medium unto itself, the technology has also been used as a substitute this year for some real-world sporting events that were canceled due to COVID-19. One of the more interesting SMPTE 2020 sessions explained how Belgian broadcaster VRT produced a virtual version of the classic Tour of Flanders cycling race as an esports broadcast.

The Virtual Tour of Flanders, produced in collaboration with race organizer Flanders Classics, cycling simulator firm Bkool, cloud production vendor Kiswe and VRT’s sports channel Sporza, featured 13 professional riders racing a simulated course on stationary “roller” setups at home. The riders’ smartphones captured live video of them in action on their bikes at home, via the Larix Broadcaster app, while the Bkool software was used to generate a virtual representation of their relative progress down a simulated Tour of Flanders course. Three virtual cameras followed the riders through the animated course, with two remote on-air commentators describing the action. The riders then did live post-race interviews from home, also via the Larix app.

VRT used a staff of 12 — a sliver of the 150 personnel normally used to cover the traditional race — and an ad hoc control room set up in an office space with plexiglass dividers for social distancing and high-powered laptops handling production tasks. VRT successfully produced two live linear feeds of the virtual competition, an international feed and a Belgium-only feed, with good feedback from both riders and viewers. The project went from idea to execution in only 10 days.

“The most important part to get this done was to not use any broadcast equipment, to use full IT equipment, software-only,” said Willem Vermost, design and engineering manager for VRT.

Using the cloud for everyday production is certainly a hot topic across both the television and film worlds today. In that vein, AWS Cloud Transformation Specialist Claire Southey led a live roundtable discussion on “Architecting Live Production Solutions in the Cloud,” where she and other cloud experts tackled the issue of latency for live applications like sports, where operators need to receive production cues with no more than a few hundred milliseconds of delay. Southey says that the choice of contribution encoder and the type of video transport used to the cloud — public internet versus dedicated fiber links — make a big difference in latency to operators.

Microsoft’s Hanno Basse, CTO for Azure Media & Entertainment, also gave a keynote address describing Microsoft’s efforts to broaden the use of the Azure platform for production including conducting a “customer listening tour” where Microsoft spoke with 46 leading film and TV production creatives.

Microsoft is working to educate the production community on the cloud’s full range of capabilities, as well as how to accurately compare the total cost of ownership of using a cloud infrastructure compared to traditional hardware.

“You shouldn’t look at this as one element at a time — so for this particular function, I need some storage, and my on-prem storage costs this and the cloud storage costs that,” Basse said. “That’s not really an apples-to-apples comparison. The apples-to-apples comparison is I have my entire production in the cloud versus I’m doing my entire production the classic way on on-prem infrastructure, and what does that mean for total cost?”

As studios and production companies look to use more remote workers via the cloud, Microsoft is also working to develop a “federated ID” system for creatives. Such credentials would not only provide artists with secure login to the Azure cloud for their current project, but also a long-term identity that would be independent of the production they’re working on or the cloud vendor they’re using.

At the end of the day, SMPTE is perhaps best known as a standards body, in charge of creating industry-wide specifications like the ST 2110 standard for uncompressed media transport over IP networks. But industry consultant and SMPTE standards VP Bruce Devlin noted that SMPTE needs to adapt to a rapidly-shifting technology landscape, in large part by bringing younger members into the organization who grew up in a software-based world and intuitively understand things like microservices. He said there is a still a need for broadcast standards, but they have to be created with more speed and offer greater flexibility for further technology development.

While a lot of SMPTE standards are “big-iron, heavy-lifting kind of standards,” Devlin said, 85% of the products being sold today are all software.

“There’s kind of a difference between the core standards and what’s being sold,” Devlin said. “But when you look closely, all of these agile apps are still sitting on top of foundational standards. And that’s the critical part for SMPTE.”

While the organization has made the most of this year’s virtual event, SMPTE hopes to return to a traditional conference and exhibition in Los Angeles in 2021. “The plan is for the Loews Hollywood [hotel] from the 1st to 4th of November,” Lange said. “And God willing, we’ll actually be there in person.”