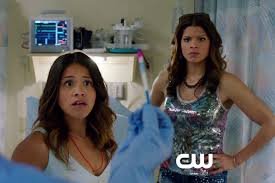 The CW's Jane The Virgin, adapted from a Venezuelan telenovela is the latest show to be adapted from the daily hour-long shows in Spanish to hour-a-week programs suited to American sitcom formats. Ben Silverman, who has worked with other adapted series like The Office which appeared in Great Britain before it became a primetime U.S. show, was the production architect of it as well as ABC's telenovela adaptation Ugly Betty (2006-10).

LOS ANGELES (AP) — Gina Rodriguez and America Ferrera have more in common than being the only Latina women to have won Golden Globes for best actress: Both of their series’ were originally Latin American telenovelas.

“Jane The Virgin”, adapted from a Venezuelan telenovela, and “Ugly Betty”, from Colombia, were adapted from the daily hour-long shows in Spanish to hour-a-week programs suited to American sitcom formats.

Ben Silverman, who has worked with other adapted series like “The Office” which appeared in Great Britain before it became a primetime U.S. show, was the production architect of the two telenovelas.

“‘Jane The Virgin’ is the next evolution of what we did with ‘Ugly Betty,’ the next step forward,” said Silverman, who founded Electus, a TV content and distribution company.

The CW series, which debuted in 2014, tells the story of a young, devout woman who discovers she is pregnant after being accidentally artificially inseminated. The CW already has announced a second season.

“Ugly Betty,” produced by Mexican actress Salma Hayek (who also started in telenovelas) and aired by ABC from 2006 to 2010, helped launch the career of Ferrera, who won her Golden Globe in 2007, and Silverman hopes the “Jane” launches Rodriguez’ career, who was honored by the Globes last month.

“America and Gina are brilliant actors and super talented, and there are not as many opportunities as it should be for actors like them, so I’m so excited that these shows gave them a platform and were recognized by the Globes. Also, the Golden Globes has people from all over the world that like to see people who they recognize,” he said.

A recent Associated Press survey found that Latino actors remain underrepresented on primetime scripted shows on network television: While Latinos are the nation’s largest minority group at more than 17 percent of the population, only Fox and ABC had Latino representation of as much as 10 percent in their Fall 2014 lineups.

The adaptations have been successful — in spite of touching sensitive themes like immigration reform and sexuality.

“We really never thought we’d have an issue by being that truthful,” said Silverman. “The more specific we are and the more we use real things, like Spanish language or real references that come from Latin culture like the ‘quinceanera’, the better the show will be.”

Silverman’s not saying whether more telenovela adaptations are in the works.

Ugly Betty lasted 4 years on ABC. I believe that this is the rookie season for ‘Jane The Virgin.’

*SIGH* If you had read the article prior to posting, it states both those points.