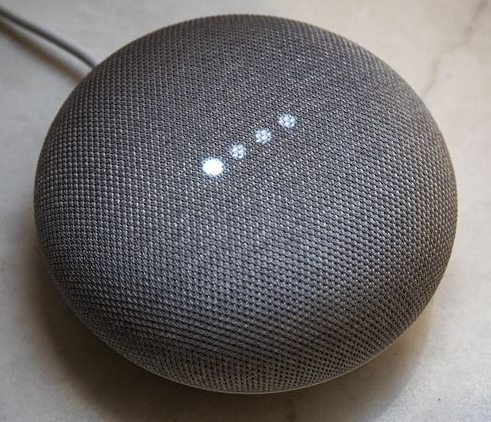 I’m finding my new Google Home Mini is more than a novelty. It’s another platform for accessing media — and it’s as a media platform that it interests me most. That's what should interest TV broadcasters as creators of mostly news content. Some broadcasters have already plunged in. More need to experiment because these devices aren’t going away — eMarketer predicts that by 2019 there will be 54.4 million “smart speakers” in use in the U.S.

I don’t think I am alone in saying that I received a home assistant or “smart speaker” for Christmas. My techy nephew David presented me with the Google Home Mini, which is in the shape of a squashed ball about four inches in diameter. Don’t be misled by “squashed.” It’s tech elegance at its best.

Skeptical at first, I have come to enjoy it. My disembodied female assistant and I are learning together how to communicate with each other. The key is to address her as “Hey, Google.” That gets her attention. She’s then ready to do my bidding.

If I just say, “Good morning,” she gives me the time and weather report for my New Jersey town, Chatham, and then automatically pipes in NPR and Fox with the latest news. When my wife asked for CBS News this morning, Google wanted to stream the CBS Evening News from yesterday. No thanks. We had already seen it.

It took a while, but I have figured out how to get her to play individual songs though my Spotify account. You just have to remember to say “on Spotify” after distinctly naming the song and artist. Right now, I am listening to Paradise by John Prine. (Interestingly, Google selected the next song on her own, another favorite from long ago, Sunday Morning Coming Down by Kris Kristofferson. She has already figured out my tastes.)

On occasion, I have been able to coax her to stream podcasts like This American Life for me. But I haven’t been able to do it consistently. I either don’t have the right syntax or certain podcasts aren’t available. There doesn’t seem to be a guide as to what is available. You just have to feel your way.

The coolest thing is being able to listen to radio stations anywhere in the country (world?)  by simply saying “Stream” and the call letters. Before streaming the station, Google confirms my selection by restating the calls and saying they come via either iHeartRadio or Tune In. I suppose that’s because I have downloaded those apps on my phone, but I’m not sure about that.

For me, the Home Mini is another platform for accessing media — news, music and podcasts. But it and other such devices like its better-sounding big sister Google Home and Amazon’s Alexa and Echo are intended for much more than media. They are, in essence, voice controllers for the Internet of Things.

From what I’ve gathered, you can use them to control your thermostat, home appliances, security system, TV set, lighting and even your car in the driveway. I’m told you can also use them to keep shopping lists and order products. For all their apparent simplicity, they are obviously pretty smart. They have to be — to recognize different voices and to respond correctly (as they mostly do) to the quirks of human speech.

The leap from controlling computers via conventional means — keyboard, mouse, touchscreens — to controlling them by voice is an enormous one, far greater than it may seem at first.

My Google Mini is learning fast and, once I figure out how to get it to control the TV and play audio books, I expect that it will become another one of those gizmos about which I will soon wonder how I ever lived without.

So, I suspect the home assistants will proliferate and help with running a household. But the home assistant as media platform is what interests me most and it is what should interest TV broadcasters as creators of mostly news content.

Some broadcasters have already plunged in.

At our NewsTechForum session in December, the digital chiefs of Graham Media and Tegna said they were experimenting with the platform to see what it could do and determine if there was any kind of business to build on it.

“I mean people are going to have these devices in their house and the people who are using them … are skewing younger,” said Graham’s Catherine Badalamente, who says all the Graham stations are producing news briefs for the Amazon devices. “We see this as … emerging and something that we need to be a part of.”

Tegna’s Frank Mungeam said Tegna is interested in learning “how to story-tell in a voice-driven world” by producing “flash briefings” — like radio’s traditional top-of-the-hour newscasts — for the platform. “It’s quite possible that one day we will wake up and voice will be the new click.”

Tribune Media is also producing flash briefings in 18 markets and a few “skills” or audio features for Alexa. Here’s a promo video that WHNT Huntsville, Ala., did on the initiative. But it’s early days, says Tribune’s Steve Baron. “There’s little story to talk about related to revenue or audience quite yet either.”

Another at that NewsTechForum session, Raycom’s Joe Fiveash, said that he wasn’t quite ready to play and, from what he has heard, neither are advertisers or their agencies. “I don’t think anybody quite understands what it is.”

Fiveash also expressed concern that high-tech giants — Google, Amazon and possibly Apple — will control the platform. “As content producers, what access would we have to the [user] data?”

Steve Schwaid, a digital media consultant at CJR, is of two minds about the home assistants. On one hand, he says, “it’s another opportunity to see if you can grab viewers and extend the brand.” On the other, he says, it’s a “time suck” for newsrooms that comes with no promise of revenue or profit. Stations “are not going to make any money on it.”

I appreciate the wariness and concerns, particularly Fiveash’s about the Silicon Valley media disrupters. Will Google, Amazon and Apple be good voice partners or will they take more than they give to content producers as Facebook has done?

But these devices are not going away. They were a hot consumer item this year and eMarketer predicts that by 2019 there will be 54.4 million “smart speakers” in use in the U.S.

And business models for content providers are developing. Last October, Amazon introduced a way for third-party developers of media, games and other “skill” services to make money by selling subscriptions. And CNBC reported last week that Amazon has been talking to big advertisers like Procter & Gamble about sponsoring content and paying for search placement.

I wish I could say that broadcasters could ignore the home assistant, but I can’t. It’s another pipeline to consumers who, among many other things, will be using it for news, weather and sports.

My town of Chatham is in the New York market. This morning, when I said good morning to Google, I wondered why I was getting national headlines from NPR and Fox rather than local headlines from WNBC or WCBS or WABC or WNYW or WPIX.

Harry A. Jessell is editor of TVNewsCheck. He can be contacted at 973-701-1067 or here. You can read earlier columns here.

I just don’t know the difference between these smart speakers and a bluetooth speaker. For the car, the benefits are obvious. But I like using my phone as the interface to pick songs and read news. I think I would find a audio-only interface frustrating. But I also don’t know why Jake Paul has 15 million subs, so I could be wrong.

News5100. Buy one. You’ll get it after you live with it. Steve Baron let me borrow one of his Alexa’s (and i didn’t give it back).

Jessell..this is news to you?? You are just figuring this out??

I’m a notorious late adopter. My prize possession is a 1937 Zenith radio.

My focus group of 1 family: Last year I bought an Echo Dot for my home and Google Home for my office. My wife uses the Echo Dot to listen to music several times a week while in the kitchen (“Alexa, play some Eric Clapton”), and my kids occasionally use it for silly questions or to see if they can trick it. (“Alexa, am I smarter than my sister?”) At work, my Google Home gets used only when I look at it and think, “I should probably ask for a news update, or the weather.” So my conclusion is that it’s a bit of a fad right now, like a “hobby PC” was in the 1970s. But I see these devices growing in usefulness, to the point of media dependence, in 3 to 5 years. I suspect that in 10 years they’ll be as ubiquitous in homes as televisions, not only as audio devices but more importantly as control devices for TVs, security alarms, light switches, and thermostats.