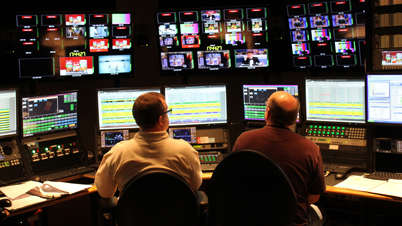 Griffin Communications' KWTV Oklahoma City and KOTV Tulsa are linked by more than just common ownership. With their Avid MediaCentral platform, reporters in in the field can do anything they normally could at their desks back at the stations. MediaCentral not only makes the job of reporters in the field easier, but also that of producers, reporters, editors at the stations. They can rely on the platform to eliminate the workflow headaches of getting access to content that resides at their sister station.

With the help of new news production technology and a collaborative news workflow based on the Avid MediaCentral platform, the reporters covering Obama in the field could do anything they normally could at their desks back at the station.

“In the field, reporters used their iPads to look at Obama’s speech and other video stored on our [Avid] ISIS [shared storage system], make cuts on it [with the MediaCentral UX user interface] and pull sound bites,” says Steve Schroeder, statewide director of news operations for Griffin Communications.

“They also wrote their scripts in the field on those iPads and went straight into the iNews system [for scripts and wire feeds].”

In addition to KWTV and KOTV, both CBS affiliates, Griffin also owns KQCW, the CW affiliate in Tulsa; KSBI, the MNT affiliate in Oklahoma City; a statewide radio network, several digital platforms and an outdoor advertising unit. All told, Griffin reaches more than 90% of households in Oklahoma with its news content.

This spring when they completed deployment of the Avid MediaCentral platform, KWTV and KOTV transformed their news production workflows to take full advantage of network sharing, streaming and how the Internet is bringing the world closer together.

MediaCentral not only makes the job of reporters in the field easier, but also that of producers, reporters, editors at the station. They can rely on the platform to eliminate the workflow headaches of getting access to content that resides at their sister station.

“We share a lot of content between the two markets,” Schroeder says. “It’s almost like each station is a bureau of the other one, and we share a lot of talent and news stories, too.”

Each station has identical Avid MediaCentral platform setups tied together by a high-speed fiber-optic path traversing the 100 miles that separates the two markets.

Pre-dating the rollout of the MediaCentral platform were Avid iNews newsroom computer systems at both stations.

With the MediaCentral UX interface, journalists can browse edited stories and raw video footage residing on ISIS shared storage located at the sister station as well as look for iNews scripts.

“They have visibility of footage [on ISIS shared storage], and they can stream it through the MediaCentral UX Web-based interface,” says Pam Gill, Avid senior segment marketing manager, broadcast and media.

According to Gill, the mechanics of accessing that content is a little more complex. While it actually resides on ISIS, the content is accessed via the Interplay production asset management system, she explains.

The MediaCentral|UX interface provides journalists with a portal into the system to access the video clips and iNews scripts, while keeping the inner workings between ISIS and Interplay transparent to the user, she adds.

Having the ability to see video stored at the sister station is an important change for the better, Schroeder says.

Before the MediaCentral deployment, reporters from one station would have to call their fellow journalists at the other station and request clips.

That could turn into a major hang-up in news workflow, especially as newscast airtime approached, Schroeder says. “MediaCentral cuts out the middleman. Instead of having to turn material around and sending it to your sister station, the sister station can just pull the content they want themselves.”

This capability is especially important for sports reporting in Oklahoma where many viewers are interested in major college sports programs at the University of Oklahoma and Oklahoma State University as well as in the fortunes of the Oklahoma City Thunder NBA franchise.

“The sports department from one market can log into their system, screen video in another market, do rough edits down to just the clips they need, pull that back into the Interplay system in their market and do the finishing touches so they don’t have to download an entire 20 minutes of highlights to get what they want,” Schroeder says.

Prior to the MediaCentral rollout, Griffin used Avid Unity MediaManager and before that Avid nonlinear editing, says Schroeder. However, he started with a clean slate when beginning to research how Griffin should take its news production workflow into the future.

“We looked very closely at all of the other systems out there,” Schroeder says. “We were prepared to switch companies if we found something better.”

Choosing the MediaCentral platform, however, made sense because it embodies the Avid Everywhere philosophy that emphasizes enabling a collaborative media production workflow, says Schroeder.

More than 100 Griffin employees, including reporters, news photographers and editors, use MediaCentral, many of whom collaborate daily on stories.

Reporters typically don’t make final edits at Griffin’s stations, says Schroeder. However, with MediaCentral they screen video, choose sound bites and mark in and out points.

“When the editors actually sit down to edit, they use those pointers to the media,” says Schroeder. “That way they can just import the clips the reporters identified into their timeline and work from there.”

Transitioning so many people to the new news production workflow and tools required a good bit of training, but nothing as extensive as the learning curve needed to transition from videotape to nonlinear editing, he says.

“We did the Interplay installs first, and then eight or nine months later we did MediaCentral. And each time we got a new product, we had Avid come in and do the training for everybody.”

Learning the new workflow and tools isn’t particularly hard, in the view of Avid’s Gill. However, often those deploying the MediaCentral platform must shed the ingrained habits built up over years about how to create news.

“It’s kind a matter of changing that mindset from ‘this is what we do, and this is how we do it,’ to ‘OK, now we have a lot more options and a lot of different ways to get things done,’ ” she says.

Looking to the future, Schroeder says Griffin will begin to expand its use of the MediaCentral platform news production for its radio network.

Much as it has made it easier to share content between stations and made it possible to tie reporters in the field more closely into the newsroom, the MediaCentral platform will be able to help radio reporters throughout the state of Oklahoma share their scripts, audio files and other resources, he says.

Relying on the MediaCentral toolset to prepare and post stories from newscasts to Griffin’s digital platforms, including social media sites, is also on the agenda, but no firm date has been set, he adds.

For now Griffin is content to reap the benefits MediaCentral delivers for its TV news operations.

“I definitely think it has given us a competitive advantage,” Schroeder says. “When it is crunch time going into a newscast, everybody is pretty busy. MediaCentral in essence is like having another body.”