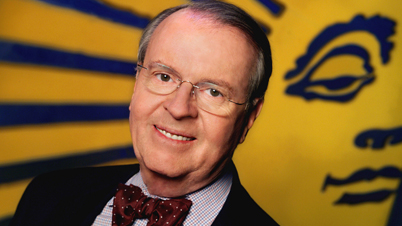 The veteran newsman will be presented with the Dick Clark Lifetime Achievement Award at the Broadcasters Foundation of America’s Golden Mike Award Dinner on Feb. 29.

Legendary broadcaster Charles Osgood will be honored with the Dick Clark Lifetime Achievement Award at the Broadcasters Foundation of America’s Golden Mike Award dinner on Monday, Feb. 29, at the Plaza Hotel in New York City.

Often referred to as CBS News’ poet-in-residence, Osgood has been anchor of the two-time Emmy Award winning CBS Sunday Morning since 1994 and anchor and writer of The Osgood File, his daily news commentary on the CBS Radio Network. He has been an anchor and reporter for many CBS News broadcasts and an anchor/reporter for WCBS-AM New York. Prior to CBS, he worked for ABC News.

Osgood has received numerous awards, including the 2008 Distinguished Service Award from the National Association of Broadcasters, several Peabody and Emmy Awards, five Washington Journalism Review Best in the Business Awards and more. He was inducted into the Broadcasting and Cable Hall of Fame in 2000 and the National Association of Broadcasters Hall of Fame in 1990. The author of several books, Osgood has also played the piano and banjo with the New York Pops and Boston Pops Orchestras.

As previously announced, the 2016 Golden Mike Award will be presented to Bob Pittman, chairman-CEO of iHeart Media, at its annual fundraiser. This is the second year the Broadcasters Foundation has bestowed the Dick Clark Lifetime Achievement Award during the gala event. Last year, it was presented posthumously to Dick Clark, in whose memory the award is named.

The Broadcasters Foundation has distributed millions of dollars in aid to broadcasters who have lost their livelihood through a catastrophic event, debilitating disease, or unforeseen tragedy. Donations can be made to the Foundation’s Guardian Fund and corporate contributions are accepted through the Angel Initiative. In addition, bequests can be made through the Foundation’s Legacy Society. For more information, please visit www.broadcastersfoundation.org, call 212-373-8250, or email [email protected].