Back to TVNewsCheck Home Print this page
NEWSTECHFORUM 2017 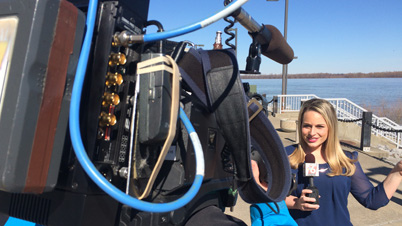 Bonded cellular — using IP over the wireless network — is the go-to medium for TV reporters in the field, while microwave and satellite are secondary, though still important, alternatives. However, some predict a resurgence in microwave as those vendors rise to meet the challenges of bonded cellular. And bonded is not sitting still, it’s moving ahead with 5G wireless technology.

Just a few years ago, microwave and satellite were the principal means TV reporters used to send live reports back to the studio, while bonded cellular was a nice third option in some circumstances.

Today, according to panelists at TVNewsCheck’s NewsTechForum panel Monday, that news gathering hierarchy has flipped.

Bonded cellular — using IP over the wireless network — is the go-to medium for reporters in the field, while microwave and satellite are secondary, though still important, alternatives.

“It … gives producers a lot of flexibility,” he said. “They can go to locations we never used to be able to access and be live from there.”

Keith Barbaria, VP of technology and operations at NBC Boston (WBTS-LD), said that as a newcomer to the market this year, it didn’t have a microwave network so had to rely on bonded cellular and, to some extent, Ka-band satellite.

But Barbaria also said that NBC believes all these technologies are important and that it integrates all of them in all of its news vehicles. “Every truck we build now — every complement of equipment for the crews — contains all of it to be flexible and agile in the field.”

Barbaria also predicted a resurgence in microwave as those vendors rise to meet the challenges of bonded cellular. “Those vendors are making changes now to create the same types of workflow you see on cell bonded.”

Converting microwave to IP makes it more capable, he said. “It’s not just transmitting video anymore.  It’s return video. It’s prompter. It’s connecting voice-over-IP phones all in your truck on your own bandwidth, which is pretty awesome.”

Barbaria and Wheeler said that bonded cellular became a viable alternative half a decade ago, and it was immediately attractive because the cost was so much less than the $300,000 of a microwave truck.

“So the cell bonded packs were a way to back up your trucks or even extend your fleet,” Barbaria said. “If you had a fleet of 15 and you had five packs, it was like having 20 trucks out in the field.”

It was rough going at first, Barbaria said. “It took a while to convince newsrooms and news directors to take the risk and put up with the on-air issues we were seeing with the backpacks, but we pushed because we knew the technology was only going to get better.”

Wheeler remembered the latency problems with cellular that made interviews difficult. But, like Barbaria, Fox saw the potential. So, the thinking was, he said: “Let’s put up with some early pain and push this technology and develop it so it will become the tool that is as useful as we see it now.”

Westerwelle said that ABC has worked closely with its principal bonded cellular vendor, TVU, to develop the technology. “We have gotten to a point now where the producers that are out in the field with these devices are so comfortable with them that they are too comfortable with them. They just expect them to work.”

But they don’t always work, he said. So, ABC is training producers to troubleshoot and to “slow down a bit” — get to the scene earlier to make sure everything is working.

Looking ahead, Barbaria said he would like to see major news camera vendors like Sony and Panasonic integrate bonded cellular technology into their cameras. “You know, no more outboard gear, boxes or backpacks or even the camera-mounted back pieces.”

Wheeler and Westerwelle said the great promise ahead is 5G wireless technology.

“There are a couple of tests going on throughout the country,” Wheeler said. “We are involved in one of them. So, we are very excited to see what that technology brings. It’s more bandwidth and hopefully it becomes cheaper at some point.”

Westerwelle said ABC News is working with Verizon on 5G. “That’s obviously the biggest next step, especially as we move forward in the world of doing everything on an iPhone or having cameras that have integrated transmission capabilities.

“That also touches on, of course, the workflow improvements for trying to create in a world where we have to serve all these different [non-broadcast] platforms.”