Back to TVNewsCheck Home Print this page
MULTICASTING 2017 | PART 2 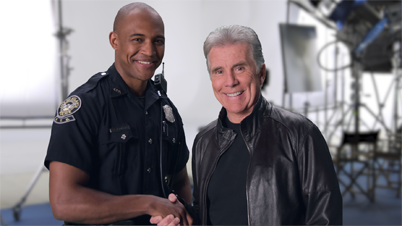 That’s the goal of Steve Schiffman, Lonnie Cooper, John Ford and Barry Wallach who are moving the Justice Network diginet in that direction since its launch in 2015. It’s now at about 60% U.S. coverage. To fill its programming grid, Justice has tapped into a vast reservoir of low-cost "factual" crime shows originally produced for cable over the past decade-and-a-half in addition to two originals. Above, John Walsh, the public face of the network, with Sergeant Ralph Woolfolk of the Atlanta Police Department. (Justice Network photo by Ray Sullivan.) This is the second installment of a three-part Special Report. Part 1 appeared Tuesday morning, while Part 3 on technology will run Thursday before noon ET. You can read all the stories here.

As president of the Justice Network, a 2-year-old, true-crime diginet, Steve Schiffman knows something of mysteries, and he says there is no mystery to running a successful diginet — keep the programming costs low.

In his final years running Fox’s National Geographic Channel, he says, he would spend hundreds of thousands of dollars for an hour of original programming. His annual budget exceeded $100 million.

That difference between cable and multicasting — between original and off-net — completely offsets the fact that the diginet is receiving no programming fees as cable networks do and that, in fact, it may be paying carriage fees to broadcast affiliates or splitting ad inventory with them, Schiffman says.

“It’s just a cost of content,” he says. “That’s how you make the economics work.”

It’s also nice to have a well-heeled owner.

That would be Lonnie Cooper, an Atlanta entrepreneur whose principal interests are in sports marketing and sponsorships (CSE) and talent representation (CSE Talent).

Cooper was one of the founders of Bounce TV, the African-American multicast channel run by Katz Broadcasting. He bounced out of that venture, but not before learning the multicasting business. He approached Schiffman about creating another channel. After doing some homework, Schiffman came back with true-crime, one of the hottest genres in cable.

Another ingredient in multicasting success is having the right people — people like Schiffman himself. In addition to 10 years at Nat Geo (the last five as president), he worked four years as a marketing/new media executive at The Weather Channel and, before that, spent two years at NASCAR in marketing.

To handle programming, Schiffman turned to his Chevy Chase, Md., neighbor, John Ford, who just happened to have worked as a top executive at Discovery Communications. Among his accomplishments there was relaunching Discovery Times as Investigation Discovery, which along with Turner’s truTV serves as a model for the Justice Network.

The other key player is Barry Wallach, the former head of syndication for NBCU. After leaving NBCU in 2013, he became involved in various syndication projects. Now, he is using his broadcasting contacts not to clear a show, but to clear a network.

All are proven winners with viewers and possess a certain evergreen quality.

Schiffman says he is sometimes tempted to compete with the big basic cable networks for the costlier, scripted crime shows that have been powering the broadcast networks in primetime, he says.

Justice is currently running two “originals,” Killing Spree and Inside the Mind of a Serial Killer. But they are co-productions, Schiffman says. Justice pays only a fraction of their cost in exchange for limited rights, the first multicasting window, he says. Original does not mean exclusive, he concedes.

Justice has one other programming expense, but it fulfills the network’s amorphous public interest obligation and gives it something to brag about. Every hour on the hour, it airs three 30-second public service announcements — back to back to back. One is aimed at capturing fugitives; one, to finding missing children; and one to safety tips.

The segments are hosted by John Walsh, who used viewers of his America’s Most Wanted on Fox to track down fugitives for 25 years. Walsh is the public face of the network.

Schiffman says the interstitials cost “north of $1 million” a year, not counting the value of the airtime that even in 90-second increments can pile up.

“Those numbers blow away what I thought we would do,” Schiffman says. “It shows the power of television media and it also shows that people are watching our network.”

Of course, there is more to a network than programming. There is also distribution. Today, Justice reaches about 60% of TV homes with affiliates from major groups like Tegna, Hearst, Tribune, Nexstar and Gray. Tegna was the charter affiliate, agreeing to carry the network across its entire footprint at launch.

Schiffman says the goal is 70% coverage by the end of this year and, ultimately, at least 85%.

This year’s growth will come primarily from adding outlets in New York and Chicago, the first- and third-largest TV markets. Those deals are already in place, he says, but he isn’t quite ready to announce them. (Justice covers No. 2 Los Angeles on a subchannel of Univision’s KMEX.)

In cutting deals with broadcasters, there is no one-size-fits-all arrangement, Schiffman says. “We can do an inventory split, we can do a pay deal if that’s what the broadcaster wants. Every broadcaster has different needs and different business models.”

In the push for 85%, he says, he and Wallach will be careful with whom they align. “We want the right deals with the right partners,” he says. “We are growing smart rather than just quickly.”

Like other muliticast channels, Justice relies solely on advertising, direct response and hybrid direct response. Schiffman says the network has just begun subscribing to Nielsen ratings it can use to sell and that should give sales a boost.

Moving into to New York and Chicago will also help, he says. But he says not to minimize the importance of the smaller market in reaching viewers and advertisers.

“A multicast network like the Justice Network actually will do better on a per capita basis in Knoxville, Tenn., and Macon, Ga., and Oklahoma City than it will do in Chicago, New York and L.A.,” he says.

Justice competes against other multicasters like Weigel Broadcasting and Katz Broadcasting who enjoy the benefits of scale. Because they operate multiple channels, they can amortize costs of administration, distributions and engineering costs across multiple businesses.

Although Justice is only one channel, it has some scale efficiency as a result of Cooper’s ownership. Justice’s shares offices in Atlanta with Cooper’s holding company, which handles back-office functions like legal, finance and human resources and save lots of money.

Schiffman is bullish not only on Justice, but on the whole muliticasting business. The new broadcast standard, ATSC 3.0, is promising to open up new channel capacity and a resurgence in over-the-air reception. For all the talk about digital, he says, OTA may be the fastest growing TV medium.

Yes, keeping programming costs low is critical in the competitive and crowded TV ecosystem. But perhaps more important, Schiffman suggests, is having a business plan based on demand rather than on supply.

“We did not all of a sudden say, oh, my god, we have a 10,000-hour library with game shows or movies about science fiction; let’s go figure out a business plan.

“We asked, what’s a concept we can build from the ground up? Let’s get the right people and then let’s go find the content in the marketplace. When you do it like that, typically better things happen.”

This is the second installment of a three-part Special Report. Part 1 appeared Tuesday morning, while Part 3 on technology will run Thursday before noon ET. You can read all the stories here.