Back to TVNewsCheck Home Print this page
IBC 2015

Broadcast-Broadband System A Path To 4K 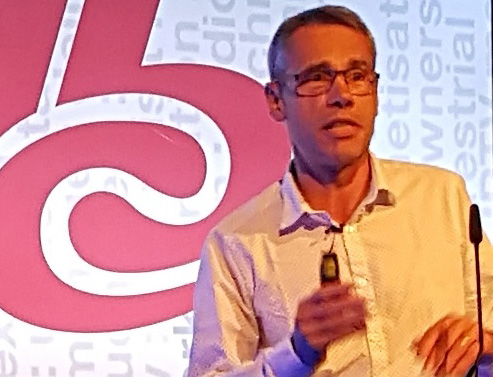 HEVC Hybrid Broadcast Broadband Video Services, or H2B2VS, is a project of 22 firms in Europe that proponents say combines the best of broadcasting with the strengths of the Internet. In a presentation at IBC, the author, Thomson Video Networks’ Raoul Monnier (l) explained how the system could make delivery of 4K television practical in an age when spectrum is scarce and high resolution video consumption holds the potential to outstrip Internet bandwidth resources.

A consortium of 22 technology players in France, Spain, Turkey, Finland and Switzerland have developed a hybrid approach to television distribution that pairs the best of broadcasting with the strengths of the Internet to deliver a variety of viewer benefits, ranging from 4K resolution and trick mode playback to a viewer-selectable picture-in-picture sign language enhancement and protection against interruptions due to rain fade and broadcast outages.

The system, known as HEVC Hybrid Broadcast Broadband Video Services, or H2B2VS, was the subject of a paper presented today at IBC 2015 in Amsterdam.

The paper, H2B2VS — Building Innovative Solutions Over Hybrid Networks, by Raoul Monnier, innovation programs manager at Thomson Video Networks, laid out how scalable HEVC (H.265), known as SHVC, could be used as the basis of a hybrid broadcast-broadband network.

During the presentation, Monnier explained how the system could make delivery of 4K television practical in an age when spectrum is scarce and high resolution video consumption holds the potential to outstrip Internet bandwidth resources.

By dividing the bit rate load between an HD component delivered via a broadcast network and an enhancement component that takes the video up to 4K over the Internet, the burden otherwise placed on broadband networks and content storage can be reduced by up to 30%, he said.

However, to make the H2B2VS actually work to support 4K content delivery, frame-accurate synchronization between the broadcast and broadband components is necessary. To achieve that, H2B2VS relies on a timing mechanism developed for the system called the TEMI Timeline that is inserted at regular intervals into the MPEG transport stream that’s broadcast, he said.

Two types of information make up the TEMI Timeline data, including a URL to tell the receiver where to go on a content delivery network to retrieve the necessary broadband network content and a timecode used by the receiver to ask for the correct content segments to be sent over the Internet at the right time, he explained.

The benefits of H2B2VS extend beyond 4K delivery, however. Rather than using the broadband network to transport the enhancement component, it could be used to send a second video streaming of a sign language translator for the hearing impaired. In this case, a PIP-generator in the TV could use the broadband stream of the translator for only those who are interested in taking advantage of it, Monnier said.

Another use case is trick mode play for broadcasting. For instance, if a viewer receives a telephone call and pauses a program being transmitted via the broadcast network, a resume play function from the pause could be enabled by content streaming from the broadband connection when the viewer is finished with the call, he said.

The hybrid system also offers terrestrial broadcasters a way to protect viewers from interrupted transmission due to technical difficulties and DTH satellite viewers against the loss of signal in a heavy rain, he said. In both instances, the broadband network could do the heavy lifting while the broadcast network is down.

In an interview following the session, Monnier said H2B2VS is ready to go today with the exception of one key component — the scalable decoders required for TV sets.

“I don’t know exactly [the time frame] for the chips,” he said. “It’s probably two to three years, something like that. It also depends on what will be decided for ATSC 3.0. If they decide to go to something scalable the chips can get here very fast.”

To see all of TVNewsCheck’s IBC 2015 coverage, click here.