Back to TVNewsCheck Home Print this page
NAB 2017 HOT TOPICS 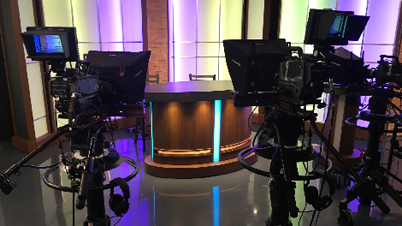 Drip, drip, drip. The trickle of changes in television capture and delivery continues to flow. But as next-gen TV inches towards finalization as a standard and the prospects for FCC authorization grow those drips will turn into a torrent. Broadcasters and camera vendors alike are getting serious about how to prepare for these changes while maintaining and improving existing HD workflow and program delivery. Click here to access TVNewsCheck’s NAB 2017 Resource Guide listing of broadcast camera vendors and products or here to download it as a PDF.

Broadcast camera developments at the 2017 NAB Show will be about transition — whether that means support for multiple formats, adding image enhancements like high dynamic range, new connectivity options or even affordability, according to camera experts.

“The major camera manufacturers are coming out with multi-format, and by multi-format I mean cameras that can switch between 4K or UHD or 2K or HD,” says Larry Thorpe, senior fellow at Canon.

“The rationale is they see this as a year of transition — and probably an extended transition where HD is going to continue for many, many years, but 4K UHD is looming,” he says.

With ATSC 3.0 on the horizon, broadcasters are engaging in serious discussions about how best to use their over-the-air bits and what precisely they should deliver to the home viewer, specifically 4K with high dynamic range (HDR) or 1080p60 with HDR.

“The average viewer sits nine feet from the TV in the home, and at nine feet on a 65-inch TV you cannot see the full resolution of 4K, but you absolutely can see the improvement in the picture due to HDR from much further away — 12 to 15 feet,” says John Humphrey, VP, business development at Hitachi Kokusai.

Humphrey, who will present two papers during the NAB Show (April 22-27 in Las Vegas) on high dynamic range, says there is only a “0.5% overhead change” when adding HDR to any camera and that doing so means bandwidth, storage and workflows essentially remain the same.

“HDR provides so much more bang for the buck than resolution alone,” he says.

A 1080p60 HDR future for broadcasters may be further propelled by TV manufacturers that “are racing to sell 4K UHD sets” that include upscalers, adds Canon’s Thorpe.

“If you were able to transmit a 1080p and upscale that to 2160p you are going to have a beautiful looking image, and you will save some bandwidth,” he says.

However, there is nothing to say some broadcasters won’t choose to transmit 4K HDR — either consistently or for special productions — in a next-gen TV future.

“We have to be format-agnostic,” says Klaus Weber, senior product marketing manager, cameras, at Grass Valley. “It will either be HLG or PQ, but it will not be one standard for the whole world, that’s very unlikely.”

As a result, Grass Valley and many other vendors will be offering new broadcast cameras at the NAB Show with built-in support for both HDR formats.

“You will see an entire ecosystem under the banner HDCam SR Live [Seen Referred] that will include cameras, switcher, monitors and conversion devices,” he says.

The idea is to produce in the S-Log gamma curve, move the signal through the HDCam SR Live ecosystem and then at the output select HLG or PQ depending on what will be used for distribution, Willox says.

Much work has been done to make HDR a reality, adds Grass Valley’s Weber. “As an industry, we are very close to the point where somebody could really start a regular HDR service.”

Bucking the multi-format camera trend is Ross Video, a relative newcomer to the camera market.

The company’s focus has been on maximizing the HD performance of its Acid Cameras, says Nigel Spratling, director of production switchers, video servers and cameras at Ross.

“One of the things I was keen to put in the Acid Cam specification was HDR, and indeed we adopted HLG,” he says. Ross chose HLG because it is compatible with standard dynamic range systems and displays.

“The tests we have done in HD [720p or 1080i] with HLG shows that even in a standard system — without ATSC 3 — I can do very compelling images with more detail in the black and less noise,” Spratling says.

Next month at the NAB Show, the company will unveil additional products that take “bonded systems a step further,” says Walton, who declined to elaborate. However, he did add that JVC is building IP capabilities into PTZ and robotic cameras to enable them “to be controlled from anywhere.”

IP is already supported from CCUs, but the ongoing work by the Society of Motion Picture and Television Engineers on the SMPTE ST-2110 professional video IP standard means vendors will respond.

For example, at the NAB Show Grass Valley will unveil a new camera base station supporting the Video Service Forum’s TR-03 and TR-04, says the company’s Weber.

The technical recommendations play foundational roles in the new ST-2110 standard. When the standard is completed, upgrading the new base station will require only a firmware update, he says.

While not new, another important trend in broadcast cameras at NAB will be affordability.

One company that has disrupted the camera market by offering lower cost broadcast and digital cinema cameras is Blackmagic Design. However, to give its customers even greater value for their camera dollar, the company has placed an emphasis on making it easy to repurpose cameras for different uses, says Bob Caniglia, Blackmagic senior regional manager.

“The ability to change lens mounts and having a removable, quick-release viewfinder makes repurposing the camera easy,” he says.

That camera, the URSA Mini Pro, which was announced a few days ago, includes a Canon EF mount but can be outfitted with PL, B4 and Nikon lens mounts.

“It can be used in a live environment with traditional ENG servo lenses and then easily reconfigured to do cinematic work,” he says.

Of course, there will be more than simply broadcast cameras on display in Las Vegas. Digital cinema, 360-degree VR, 8K and high-end production cameras will be on the exhibit floor, as will some of the latest research into camera technology and use.

German technology research institute Fraunhofer will be at the nexus of where the real and virtual worlds collide during NAB.

“We are focusing on what we can do with the enormous amount of data coming out of the camera,” says Siegfried Foessel, head of moving picture technologies at Fraunhofer.

Using multiple high-resolution cameras, Fraunhofer will capture the data and create 3D models of objects and put them into a CGI environment.

The demonstration will be similar to the “Be the Player” technology Fox Sports used at Super Bowl LI in Houston.

“Camera technology itself is very advanced, and I don’t think there will be much more improvement besides 8K and 16 or 17 f-stops,” he says. “That’s the reason why the trend is going towards multi-camera systems. We can use the data from multiple cameras to get a kind of 3D presentation.”

I have seen a 4k display with 4k origination. honestly it looks like a lifeless video game.