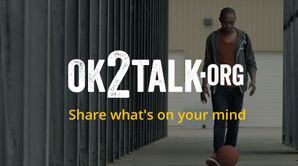 The National Association of Broadcasters today announced that OK2TALK, NAB’s public service announcement campaign designed to end the stigma around mental health, has received $6.9 million in donated broadcast airtime since its launch on July 23.

The PSAs have aired on television stations across America more than 48,000 times and more than 3,300 times on radio stations. OK2TALK.org, the campaign’s Tumblr page, which is featured in the spots, also has seen significant engagement, with more than 200,000 page views, 100,000 total visits and 14,265 followers.

“I’m so proud of broadcasters across the country who have embraced this campaign and stand united in making a positive difference in the lives of millions of people,” said NAB President-CEO Gordon Smith. “Local broadcasters and our network partners are committed to a national dialogue on mental health, ending the terrible stigma that surrounds this disease, and encouraging young people to get help for a health issue that can be successfully treated.”

The radio and TV PSAs direct people to OK2TALK.org, a Tumblr-based community where teens and young adults struggling with mental health problems can share personal stories of recovery, tragedy, struggle or hope. By inviting young people, their families and friends to add their voice in a safe, moderated space, the campaign encourages an organic conversation about mental health challenges and recovery stories. The site also includes resources for those seeking help.

In addition to the thousands of broadcast stations that have committed air time and financial resources in support of OK2TALK, partners in the effort include: Active Minds, Bring Change 2 Mind, Each Mind Matters, Entertainment Industries Council (EIC), Mental Health America, the National Alliance on Mental Illness (NAMI), One Mind for Research and Tumblr.

Giving away time that you’re unable to sell is not the same as donating. What a crock.