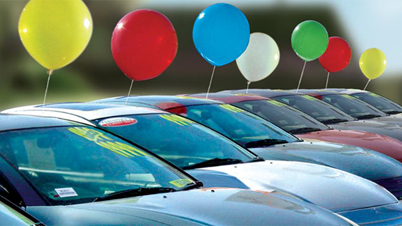 More and more stations and groups are taking the initiative in securing and growing the crucial auto category at a time when stations' share of ad marketing dollars are not keeping pace with booming auto sales as they have in the past. One tack is an increasing interest in programmatic buying and selling, while another is to aggressively follow auto dollars into the digital realm. Publisher's Note: Deep Dive is a new, branded feature of TVNewsCheck.com. It is offered free today as a sneak preview of the kind of in-depth content soon to be offered in the our Premium Member Center. To read the first part, click here.

To appreciate how hard local broadcasters are trying to capture as much automotive ad spending as possible, look no further than TVB.

The trade group in June hired Steve Sturm, a 30-year Toyota executive, to strengthen its ties to the auto industry, which accounts for about a quarter of spot revenue.

“What it says is that the spot TV business is not going to sit back and let our money go away,” said one station group sales exec active in TVB. ” We want to understand auto advertisers’ needs better so that we can provide them with better solutions that will help them achieve their goals.”

The Sturm hiring is just one example of how broadcasters are taking the initiative in securing and growing the crucial auto category at a time when stations’ share of ad marketing dollars are not keeping pace with booming auto sales as they have in the past. (See Deep Dive: Spot Auto, Part I)

The future is likely to have its speed bumps too. “If budgets begin to shift, television has the most to lose,” said Jon Swallen, chief research officer at Kantar Media, in speaking of the auto category. “Among legacy media, television has trumped print and radio. But now there’s this new kid on the block — digital — and he’s swinging away at television budgets.”

According to Kantar Media, spot TV received $4.3 billion from automakers and dealers last year, the same as in 2013.

Sturm would like to prove the BIA/Kelsey numbers conservative. To that end, he will be providing TVB members with monthly reviews and forecasts of how the auto business is continuing to change. More important, he will also take to the road, advising broadcasters and pitching auto advertisers.

“The world is changing quite rapidly in the auto business,” he said. “[Stations] want to understand the dynamics of the changes that are occurring and have the right tactics and properties that can address the dealers and associations’ needs.”

TVB isn’t alone in turning to auto experts. “For years and years, newspapers had auto specialists on their staffs, people who could talk the language with their largest auto dealer accounts,” said one group sales exec.” At our company, we’ve hired several people — and we intend to hire more — who have expertise in the auto category.”

“Sinclair has the ability to talk with the dealers that David Smith owns, which allows ad execs to see how effectively broadcast advertising can be combined with digital offerings,” said Carl Salas, a financial analyst at Moody’s Investor Services. “So they have an advantage. They benefit from knowing exactly what dealers want.”

Rob Weisbord, COO of the Sinclair Digital Group, downplayed the connection. “The amount of intel we get from his [Smith’s] dealerships we get from other dealers and advertising agencies around the country.”

But Salas believes that Sinclair has an advantage. Rather than getting information secondhand from a dealer, he said, Sinclair’s sales teams can get an inside, direct view of a campaign’s results.

Broadcasters’ interest in programmatic buying and selling is growing, and a large part of it is due to their desire to counter the cable and digital incursions into auto head on. “We need to grow up. We need to inform the [auto advertisers’ spot] investment through data and have ROI metrics in place on the backend,” said another group sales VP exploring the programmatic option.

Broadcast groups have recognized that a way of hanging on to auto dollars is to follow them into the digital realm. “It’s important for us to make sure that dealers and their inventory are visible across all platforms — mobile, tablet, the desktop and, of course, television,” said Tom Sly, VP of digital revenue at E.W. Scripps. “Tier 3 [local dealers] are relying on the broadcast buys to be done by Tier 1 [auto manufacturers] and Tier 2 [dealer groups]. Tier 3 is spending more money on digital.”

The manufacturers know they have a higher rate of sales if consumers are pushed to their own sites or dealer sites, Sly explained. Scripps abets that by packaging together search marketing, display, pre-roll, re-targeting and geo-targeted online video, in addition to traditional spots.

Sinclair offers a similar assortment of options. Weisbord explained that if advertisers go elsewhere to get the branding power of TV combined with the digital solutions, “they’d have to go to a variety of vendors with disparate dashboards, versus one dashboard to look at how their investments working.”

“Over 500 promos ran, and we had over 20 million ad impressions delivered,” said Phillip Deems, creative development director at the station.

WKMG has no data to show how the webisodes affected Jeep sales. But Chrysler’s agency liked the promo campaign so much that it scaled it to other markets, Miami and Tampa.

In Salt Lake City, Deseret Management Corp. has used the branding of its NBC affiliate KSL to build a classified auto sales site within KSL.com.

KSL.com’s auto sub-site is unusual because it combines “private party listings with dealer listings,” said Chris Lee, president of Deseret Digital Media. “We’ve had dealers tell us that 75% of their leads are coming from KSL Cars.”

Deseret has an advantage over other media companies with broadcast brands, because it started KSL Cars early on and has an extremely large user base in Utah due to its ownership ties to the Mormon church.

Some owners of broadcast groups have plunged deeply into digital through separate business units.

For instance, Cox Enterprises, owner of the Cox Media Group and its large portfolio of radio and TV stations, has amassed a collection of auto verticals in digital, including Manheim.com, Autotrader, Kelley Blue Book, vAuto and NextGear Capital.

And Tegna (formerly Gannett) is pursuing a similar strategy, from the site cars.com. How much synergy there is with the TV stations remains to be seen.

“What Cox did is not small,” said Salas. “What Gannett’s doing is far from small. What Sinclair’s doing is obviously meaningful as well. They’re not blind to the auto spending going to digital.”

Indeed, TV broadcasters appear to have taken their blinders off. Between the corporate synergies, digital offerings and auto experts, they’re going after auto dollars any which way they can.

Part 1 of this Deep Dive, posted Aug. 12, examined why spot auto revenue has been lagging behind surging auto sales. Read it here. Deep Dive is a new, branded feature of TVNewsCheck.com. It is offered free as a sneak preview of the kind of in-depth content soon to be offered in our Premium Member Center. Stay tuned for details.