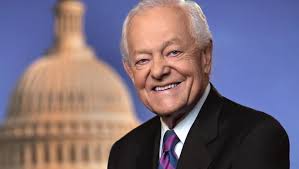 Schieffer will host CBS's Face the Nation on Sunday for the last time after 24 years. He's retiring from a journalism career that began at 20 at a Fort Worth, Texas, radio station and landed him at CBS News in Washington when he walked in on someone else's interview.

WASHINGTON (AP) — At 78, Bob Schieffer is entitled to reminisce about the “good old days” of reporting. He believes young people coming into the business can also learn from them.

Schieffer will host CBS’ “Face the Nation” on Sunday for the last time after 24 years. He’s retiring from a journalism career that began at 20 at a Fort Worth, Texas, radio station and landed him at CBS News in Washington when he walked in on someone else’s interview.

He’s one of the last of a generation of reporters working at such a high level; he covered the assassination of President John F. Kennedy, a story that gave him one of the biggest scoops of his career.

“I suppose every generation thinks that the kids younger than them aren’t as good as they were and screwed it up in some way,” he said. “I try not to sound like an old goat, but the fact is there will always be a need for reporters, whether they are doing it on television or a website or for a newspaper that is not on paper anymore.”

He learned the craft of reporting, and the importance of checking out facts, from hard-bitten newspaper editors. He’s concerned that many young journalists now work in jobs without editors to guide them.

His Kennedy scoop was a spectacular example of the importance of simply answering the phone. As a newspaper reporter in Fort Worth in November 1963, he picked up a ringing phone to find Lee Harvey Oswald’s mother on the line. She was looking for a ride to Dallas to see her son, the suspected gunman in the Kennedy assassination. Schieffer grabbed a notebook and drove right over to her.

Recently, an aspiring reporter in Texas sent Schieffer a note seeking advice on a school project. Schieffer sent his phone number and the student replied that he’d rather talk via email. Schieffer Rule No. 1: pick up the phone or drop by.

“How do you ask a follow-up question?” he said. “How do you listen to a person and the tone of his voice to know whether he’s putting you on? The best way to interview someone is face-to-face and I think we ought to get to that whenever we can.”

Schieffer went to Vietnam on assignment for his newspaper and after he appeared on a local talk show upon his return, a television station offered him a job. “It was $20 a week more than I made at the paper, and I needed that $20,” he said.

He made his way to a local Washington station and, in April 1969, summoned the nerve to walk in on the CBS News bureau chief without an appointment. He was let into the executive’s office by a secretary who mistook Schieffer for another Bob – longtime NBC News reporter Robert Hager – who actually had an interview scheduled that day. Schieffer talked his way into the job and never left.

Schieffer never lost his Texas twang. No need. It reinforces his signature of asking direct, to-the-point questions without getting lost in the weeds of political mumbo jumbo.

Nothing annoys Schieffer more than when he doesn’t ask a question because he fears it’s too simple, or that he already knows the answer, only to find a rival generated headlines by asking the one he neglected.

Schieffer is disturbed by the changes he’s seen in Washington. It’s a meaner place, he said, partially fueled by Internet anonymity but also by a lack of collegiality. Lawmakers of all stripes and their families used to know each other better but now spend more time in their districts and less time in the capital. Some families never move.

It has led to an inability to get things done that Schieffer says is a greater danger to the country’s future than terrorism.

“It has changed the people who run for office now,” he said. “I don’t mean they’re bad people, but they’re different. They have to raise so much money, they have to sign off with so many interest groups to get here that once they’re here they can’t compromise their positions. Their positions are set in stone.”

Seeing the nation’s leaders up close leads him to conclude, “Some of `em I like better than others, some of `em I respect and some of `em I don’t. I still think most of the people in government are good people, but there are some exceptions.”

Retirement or not, he’s not willing to reveal those exceptions.

Soon Schieffer will pack up an office stuffed with memorabilia, much of it reflecting has passion for country music. One picture shows him standing by a bar with Walter Cronkite, Peter Jennings, Tom Brokaw and Dan Rather. After his last show, he’ll walk a few blocks to a restaurant where old friends and colleagues will toast his tenure.

Chances are he won’t completely disappear from CBS News, with some elder statesman role likely.

For now, he’s looking forward to a summer off.

CBS blew it badly when they didn’t put in Bob Schieffer immediately after Dan Rather, deciding to hire Katie Couric instead.

Would have actually caused the demise earlier. Simply take a night and look at the age of Anchors/Reporters on CBS, NBC and ABC – not to mention the story count and content. Schieffer would have caused faster declines.