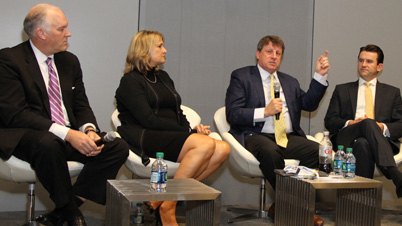 The top executives of four TV station groups assessed the state of the TV broadcasting business (l-r: Hearst’s Jordan Wertlieb, NBC’s Valari Staab, Tegna’s Dave Lougee and Sinclair’s Chris Ripley). Among their topics were the future of audience measurement including specific-device measurement built into the ATSC 3.0 standard; why automated buying and selling of TV ads has been so slow to be adopted; and the changing value of sports programming, especially NFL games. (Photo: Wendy Moger-Bross)

NEW YORK — Sinclair President-CEO Chris Ripley confirmed that his company is dropping Nielsen in favor of comScore’s audience measurement. But that won’t last. Eventually, comScore’s services will be usurped by yet another measurement option.

“We are underway in making that transition [to comScore],” Ripley said. “The reality is both systems have their flaws. It’s sort of ‘pick your poison.’ At the end of the day, I believe both will be replaced by specific-device measurement, built into the ATSC 3.0 standard.”

He says the preferred method of measurement further out in time will come from companies like Sorenson Media, which can calculate measurement of media consumption by individual households on a second-by-second basis. (Sinclair is a lead strategic investor in Sorenson.)

That was but one of several topics discussed during a TV2020 conference session featuring four CEOs at the NAB New York Show today. In addition to Ripley’s thoughts, other forward-thinking comments came from Valari Staab, president of the NBC Owned TV Stations; Dave Lougee, president-CEO of Tegna; and Jordan Wertlieb, president of Hearst Television.

“There’s a lot of players in the ecosystem,” Lougee said, by way of explaining the slow pace. “There’s buyers, there’s sellers, there’s agencies, there’s lots of third parties and contracts.”

Lougee stressed that the word is “automation” for broadcasters, not “programmatic.” The latter is specific to the digital environment, which has an infinite amount of inventory. “This isn’t about machine-to-machine [transactions]. [Station] inventory is finite, some of it is premium. We’ve got to get it right. It’s really about taking a lot of unnecessary work out of the system.”

On the one hand, Ripley believes that by next year at this time, industry players will still be talking about the slow movement toward automation. But he also believes that 2018 is the year when automation will start to really take off. “It is complicated and a technical challenge. That’s why it hasn’t moved faster. It’s a very complex ecosystem.”

On the other hand, he added: “I do see a groundswell this year in terms of wanting to get it solved. The agencies have no margin left to support the buying of local TV stations. And that’s a problem for them and for us. There are technologies that exist today or are far along in development to address these issues.”

The panelists also discussed the changing value of sports programming — and more specifically, National Football League games — to broadcasters. “It’s important to the networks and the stations,” said Staab. “But the NFL has put its games in a lot of places right now. And I think that’s what’s hurting its ratings more than anything else. What has made NFL valuable was exclusivity, and the pendulum needs to swing to make it more exclusive.

“It’s tough to have it in three places,” Staab said. “On an online provider, the NFL Network and on broadcast.”

Harry Jessell, editor of TVNewsCheck, asked the panel if the networks should go after football rights hard, noting that Thursday Night Football rights are coming up for renewal next year.

In response, Wertlieb painted a glass half empty/half full picture, first noting that the average Sunday night game is drawing about 15 million viewers on average. “Every week I look at the Top 10 viewership, and Sunday Night Football is the No. 1 show on the networks. On cable, the No. 1 show is typically Monday Night Football on ESPN. So it’s very important, but the deal has to be right.

“The days of exclusivity with our networks and syndicators keeps getting nipped at at the margins,” Wertlieb said. “My own personal theory on the NFL is the length of the games [is a detriment]. Our ratings are quarter-hour average, so I have to look at the cume of the games versus the quarter-hour average. I know from my own personal viewing, there’s so much interesting television on, and so much football on. And Major League Baseball has creeped into November. The competition is greater. So, am I going to watch a bad football game for three hours or am I going to go channel surfing?”

The tricky issue of what content to put on Facebook was also discussed. “We look at what helps build a relationship with our viewers, versus what is just going to be consumed by people all over the country instead of in our markets,” said Staab. “We don’t put live broadcasts up very often.” When the NBC Owned Stations do, it’s generally in during public service emergencies, such as hurricanes.

Staab said her stations sometimes send out Facebook content before the 11 o’clock newscasts, aimed at luring viewers to the broadcasts.

Hearst stations also largely avoid repurposing their on-air content on Facebook, but find it of promotional value. “It’s a great way for us to reach consumers in a different way — personalize some talent in a different way and build audiences,” said Wertlieb.

The executives also noted that as an increasing number of consumers cut the cord and watch TV over the air, it works to their advantage. “That’s a distinguishable value proposition,” said Wertlieb. “We have 100% distribution, when none of our competitors in the cable or broadband industry do. That’s been recognized in the upfronts, network sales and local sales.”

On the syndication front: The days of serving up fresh syndicated content for part of the year, and then reruns of the same show for the remainder, no longer is optimal for the stations. And that’s part of the thought process behind some station groups’ moves to create more of their own shows for parts of the schedule typically reserved for syndicated fare.

“If you feed a show with a star on a couch, that’s really not topical. We don’t even mean day and date, we mean moments. There’s an incredible symbiotic relationship between consumers and social media. We think, given the way consumer habits are evolving, it’s more important to be live,” said Lougee, in speaking of the thought process behind Tegna’s new news and entertainment show Daily Blast Live. “I don’t think we can wait for the studios or others to do that for us.”

broadcasters need to stop being cowards with the NFL owners who have proven to be cash mad plutocrats. The NFL Network needs to be shut down immediately. Thursday night games are a joke. The broadcaster do not have to air the games or report results in their news. The NFL can be given a hair cut.

Lougee did not come from sales. He is learning that those “icebergs” are human beings.

automation is, indeed, about machine-to-machine transactions. That’s what APIs and pre defined business rules do (expose inventory/accept/reject/counter). And, there will never be a race to the bottom if there are floor rates, even in bid based marketplaces.

Same old problems, same old stalling by the same old people. New blood is needed. If everyone is still waiting on automation because it is difficult then bring someone in who thinks and lives in the future and is not content to holding onto the past. Lougee should be reminded that the majority of the iceberg is below the surface.

so is the profit

Regarding the NFL ..when the bidding was happening and they were talking about shared viewing on CBS and the NFL network I said ..what a stupid idea…an idiot could see what was happening .the NFL was spreading it’s brand at the expense of the “weak affiliate body” and I mean spineless and weak. The NFL could care less about affiliates, their newscasts that lead out etc…all they care about (and this includes the players,owners and suits in NYC ) are $$. At the expense of their so-called partners..Period the end!! And how has that worked out. I want to know who is going to be the first broadcast group that has the temerity to say..We are done ..Not airing the games any longer under this arrangement !!!The answer is none..There are no leaders left in the Local TV business!!