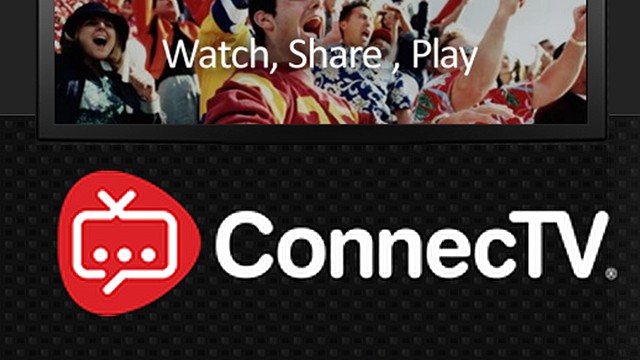 Bringing an interactive viewing experience into the living room has taken many forms over the years –from remote controls and VOD to smart TVs connected to the Internet, but the latest approach, a new smartphone and tablet app from ConnecTV, has a chance to transform what it means to interact with a TV set and generate a new revenue stream.

The free app, which is available today for iOS devices and scheduled for an Android release later this month, gives users a way to select and clip a six-second snippet of TV programming on their second-screen device, annotate it with their own comments and share it via social media outlets like Facebook and Twitter or email it to friends.

“We built a platform to make it simple for you to clip TV without having to pause and rewind your DVR,” says company cofounder and CEO Ian Aaron.

For local broadcasters and networks, the Clips Ads service provides a straightforward way to generate revenue. Between the time that the user creates the clip and his friends receive it, broadcasters will be able to attach ads to in the form of post-roll with overlays with links to website or other social media.

Broadcasters would also have the option of cutting out the middleman. A station could create a six-second content clip of its own contest and then attach an ad before sending out to Facebook friends and Twitter followers. News clips might come with a car ad.

“It’s really a way for the traditional broadcast spot to be extended into this social video space,” says Aaron.

The way the ConnecTV app approaches its core clipping function is particularly appealing for broadcasters and advertisers because it focuses viewer attention on program content rather than distracting them with activities unrelated to the show.

Findings released by Nielsen in June 2013 on the activities of tablet and smartphone users while watching TV make the point. Second screens are a big distraction from TV –so much so that the top three activities have nothing to do with the TV show being watched, according to Nielsen.

The ConnecTV app turns the Nielsen findings on their head. Rather than a distraction, the device becomes a tool that pulls viewers into deeper engagement with a show by requiring them think about the content, make an editorial judgment and take action.

In practice, that means tapping the second screen when something happens during a program that the user wishes to clip. Doing so sends a request to the cloud for the previous two minutes of program video, which is delivered to the device of the person using the app.

The users then scuttles back and forth through the two-minute clip with a finger swipe till the desired six seconds come into view. Pulling in from the left and the right of the clip on the interface narrows the selection down to six seconds.

It’s no accident the ConnecTV app is aimed at enhancing conventional TV. An early investor in the company is Pearl, a partnership of eight major television groups with a total of 170 network-affiliated TV stations. Pearl has played an important advisory role as ConnecTV has developed its products, says company chief marketing officer Stacy Joina.

A beta release of the iOS app weeks before the 86th Annual Academy Awards in early March gave a strong indication of its popularity and potential. Within the first two days of the show’s airing, ConnecTV clips showed up in nearly 1,900 Twitter posts, which were seen by 11.9 million people, says Aaron. Of those people, 2 million actually clicked through to watch the clips.

“We had just launched literally weeks before, so the user base was very small,” says Aaron. “If you can imagine 10, 20, 100 times the size, then all of a sudden you are generating 20 or 30 million additional views of a clip and related advertising overlays. That’s huge value.”

All of this activity is fully reportable on a per-click basis, along with data on the clicker’s DMA, Zip code and brand interest, he adds.

He points to a 2006 news story from KOMO Seattle on inflammatory breast cancer as an example of the potential and pitfalls broadcasters currently face when dealing with the Internet.  The story, which received more than 10 million hits online, only had the opportunity to go viral because someone at the station knew how to use social media, he says. “That knowledge is not held at every single television station,” says Borrell.

“The tragedy for KOMO is they didn’t get a dime of extra revenue for all of that exposure,” he says. “But here is the answer. It sounds to me like ConnecTV is a way to monetize that exposure. I think it really hits the mark.”

The first iteration of the ConnecTV app relied only on program audio to identify what was being watched. As the app has evolved, however, data points have been layered in to allow the app to identify live television, such as national sports coverage and local news, says Joina.

Beyond that, the company is not disclosing “the secret sauce” of how it identifies and delivers video segments for editing, says Joina.

Currently, the ConnecTV app recognizes a large number of broadcast and cable networks throughout the country and local affiliates of ABC, CBS, NBC, Fox and CW in the top 30 markets, says Joina. The company has plans to rollout local station recognition in more markets “based on economics,” he adds.

Anne Schelle, recently named managing director of Pearl, says the station group partnership has made no decision on whether or not to support the app, but that individual stations or groups that are part of Pearl are free to participate.

Cable TV customers also may find the app’s “Watch” feature useful. An API available to participating MSOs allows viewers who watch a clip made with the app to touch the “Watch” button on their tablets or smartphones and have their set top box automatically tune into the show –or if it’s not live, call up the show from the operator’s VOD service, says Aaron.

Next up is integration of the ConnecTV app with the company’s newly acquired TweetTV intellectual property. ConnecTV announced June 30 that it had acquired the social analytics and TV guidance company.

Together the complementary technologies will give viewers a way to find and watch TV shows based on Tweeting activity and related TV-based key words, says Aaron.

Beyond the integration, Aaron foresees the TweetTV platform also enabling third parties, such as MSOs, to give viewers real-time insight into the popularity of shows. “If I am an MSO and I want to bundle Twitter activity to show buzz ratings of what people are watching in real time that’s what we do.”