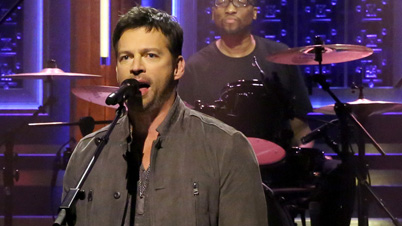 Where the challenges of daytime TV are concerned, Harry Connick Jr. sounds like a man who is entering the syndication fray with his eyes wide open. In this interview with TVNewsCheck’s Adam Buckman, he says he's aware of the failure rate of new shows in daytime, and acknowledges that Harry — like any new high-profile syndicated offering — represents a gamble for everyone involved. However, he also emphasizes that he’s well aware of the role that stations play in the success or failure of a show like his. And he’s shrewd enough to express his gratitude to the stations that are picking up his show.

It’s all of the above, says Connick, 48, who struggles to describe the show, titled simply Harry and already sold in 80% of the U.S., according to syndicator NBC Universal Domestic Television Distribution. It’s slated to premiere in September.

“It has elements of all of those things and it’s really none of them,” Connick says. “It’s kind of hard to describe.

“As opposed to being a standard format that sort of plugs me in, it’s more about building a format around what I do, and that involves everything from talking to people to singing to playing piano to comedy to a little bit of everything,” says Connick, who is best known as a singer and piano player raised in New Orleans, although he has long acted in movies (Little Man Tate, Memphis Belle) and TV (Will and Grace, Law & Order: Special Victims Unit).

What is known about his new daytime show is this: Harry will be produced in New York (Connick lives in Connecticut) in a studio at the CBS Broadcast Center on West 57th Street. The show will have a band — seven to 10 pieces, he says — comprising musicians he has long worked with.

The co-executive producers of the show are brothers Justin and Eric Stangel, co-head writers on David Letterman’s Late Show on CBS from 1998 until the show ended last spring. While working on the Letterman show, the Stangels got to know Connick from his many guest appearances. In 2013, they were widely reported to be collaborating on a sitcom for Letterman’s production company, Worldwide Pants, that would have starred Connick as a single dad with a teenage daughter. That project never came to fruition.

Connick says the set of Harry won’t have a standard talk show desk and couch, but there will be a piano on stage. “The show has almost a nighttime feel to it, but during the day,” Connick says. “What we wanted to do is create an environment that was very, very special for the people that would be watching it and make them feel that they were going to some kind of event.

“I didn’t want it to feel like they were just coming into my living room, which is why the set is pretty modern, pretty stark, pretty Spartan in terms of how it’s decorated, so the entertainment would be the focus.”

Three pilots were taped featuring guests Colin Farrell, Mindy Kaling, Mariska Hargitay and Dakota Fanning, Connick says. From the tests, a sizzle reel was assembled that has been used to sell the show. Among the stations that have signed on are the Fox Television Stations in 17 markets in a deal announced last October. It surprised many in the TV industry because it was long assumed that the NBC O&O’s would pick up Harry as a replacement for Meredith Vieira, which was recently canceled. Instead, the NBC O&O’s seem intent on expanding their local news production, leaving little or no room for a new syndicated show such as Harry.

Where the challenges of daytime TV are concerned, Connick sounds like a man who is entering the fray with his eyes wide open. He is aware of the failure rate of new shows in daytime, and he acknowledges that Harry — like any new high-profile syndicated offering — represents a gamble for everyone involved.

“If you look back at the decisions I’ve made over the years, if we had based any of them on things that had a high success rate, I would have a completely different career,” Connick says. “I’ve always done things based on what I really wanted to do.”

Rather than focus on tailoring the show toward a specific audience segment (such as the primary target for daytime TV, women 25-54), Connick says he’s concentrating on doing the best show he can, and hoping that the audience will then find him, whoever they might be.

“Of course… I know that 65% of the people watching are women and [you can] subdivide it from there, but if I start doing segments about breast-feeding because I’m trying to appeal to young mothers that would be a mistake.”

Connick emphasizes that he’s well aware of the role that local stations play in the success or failure of a show like his. And he’s shrewd enough to express his gratitude to the stations that are picking up his show. Harry is being offered to stations on a cash-plus-barter basis — a license fee plus 11 minutes per hour for local station sales and 4 minutes for NBCU, according to sources.

“I made it really clear to the people at NBC that it’s imperative that at some point I need to look in the eyes of these people and shake their hands and tell them thanks, whether that’s at the [NATPE] conference in Miami next week or on the phone,” Connick says, adding that he’s looking forward to putting in personal appearances at local stations to promote the show.

“I mean, I must have talked to 50 station managers by this point because I insisted on it. I said ‘Give me the numbers of these people and let me thank them….’ My goal is to thank everybody. I’m sure I’m going to be going and visiting stations and appearing on broadcasts in local markets and I’m thrilled about that.

“I like to do that anyway,” he says. “I am so grateful. I talked to three people today [just to say] ‘Look, I’m calling to say thank you because I get it – you’re banking on something that you haven’t even seen yet and I don’t take that lightly.’ So I hope to make contact with as many people as I can.”

Parker Opens Up About ‘City’ Costar Garson After His Passing

‘The Other Two’ Renewed At HBO Max

Could This COVID Wave Reverse The Economic Recovery?

Rudy Giuliani Not Banned From Fox News, Just Not ‘Relevant’

Blumenthal Calls Out FCC On Robocalls

‘Doctor Who’ Showrunner Russell T. Davies To Return Next Season

How Facebook’s ‘Metaverse’ Became A Political Strategy In Washington

Donnelly, ‘Emergency!’ And ‘The Clonus Horror’ Actor, Dies at 77