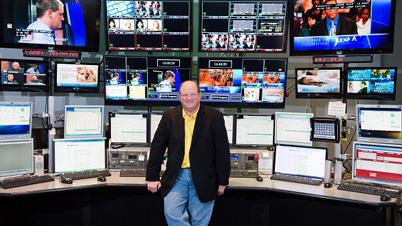 Tribune Broadcasting recently reversed its policy of reticence when it comes to discussing technology, and what a story the station group has to tell. Motivated by a desire to shrink its tech spending dramatically and shed costly maintenance contracts, Hank Hundemer, Tribune SVP of engineering (above), launched an ambitious engineering project to create and maintain a homebrew newsroom system and master control that the group began to deploy in 2008.

A confluence on circumstances, technology and vision in early 2008 set Tribune Broadcasting on a path few broadcasters choose to take: develop and maintain its own key television systems, including those in the newsroom and master control.

“We were spending an enormous amount of money on equipment and maintenance in 2008,” says Hank Hundemer, SVP engineering for the broadcast group.

“At the same time, the CPU speeds of reasonably priced computers were getting to the point where it was obvious we could handle HD video inside a common, everyday personal computer.”

Coupled with HD-SDI I/O cards, those personal computers could record and playout MPEG-2 and provide a do-it-yourself technology backbone upon which to build critical TV operations, he reasoned.

“I surmised that it was possible because of some of the graphics that were happening in the video game arena at the time,” Hundemer says.

That was early in 2008, and by late April of that year, Hundemer and his team had its first playout and record servers, he recalls.

A short time later, Hundemer connected in a homebrew newsroom system and video management system, and with that Tribune was off to the races on developing and deploying its own broadcast technology.

Within the past few months, the station group has begun deploying the latest member of its suite of Tribune-developed tech solutions called MONx.

The device is an inexpensive monitor wall driver that makes it easy to control what is displayed on news sets at the group’s news-producing stations.

While MONx improves the overall on-air look of the stations, back in 2008, Hundemer was focused specifically on the group’s core systems.

First up was the newsroom system. “We looked at what we were paying for ENPS and the cost of what developing a newsroom system might be. And we gambled,” Hundemer says.

One week before Tribune’s ENPS contract was set to expire, Hundemer and his team were in New Orleans during Mardi Gras installing its new OPUS newsroom scripting and assignment systems at WGNO — the last of the Tribune stations to receive the system.

Hundemer started the software development of OPUS with word processing modules and then added other components, such as a wire ingest module.

At the same time, other developers were working on the TONS newsroom video management system.

“We have a dynamite UI designer who works with us, and she had the vision of what all of these pieces [TONS, OPUS and others] would look like in a smooth user experience,” he says.

In 2008, building a newsroom system that integrated the digital and linear workflows of journalists in the newsroom was visionary, and that’s precisely what Hundemer set out to do.

To digital and linear newsroom OPUS users, it appears as if there is one working environment from and to which assets can be dragged and dropped.

Outside of the core OPUS system, it is still possible to “bolt on” MOS-driven devices, such as teleprompters and Ross Video’s OverDrive control room automation system, he adds.

Further blurring the lines between the digital and the linear newscast environments is DGx, a software tool Tribune built to make it simple to import social media content to air and vice versa and FLIGHT, an HTML5 and CSS3-based character generator to fulfill on-air and digital requirements, he says.

“Our server is made up of 15 little PCs — any one of which we can lose because the others can pick it right up,” he explains.

“We really wanted to stick hard to an architecture that would allow us to go to Best Buy on a Sunday afternoon and buy a replacement computer if there was a failure.”

In the early days to overcome the skepticism some Tribune station engineers had about replacing proprietary broadcast technology with Tribune-developed systems, Hundemer would visit stations short one PC.

“Let’s says we needed eight playout channels,” he recalls. “Over lunch, we would go to a Best Buy and buy the eighth, and after lunch we would build up the playout server with the gear we literally bought down the street.”

Playing out video to conform to an on-air newscast rundown from the Tribune system led Hundemer to wonder why the same couldn’t be done in master control.

“In the traditional world of broadcasting, it’s radically different. This is the production hardware, this is the master control hardware, and never the two shall meet,” he says.

“Why are they separate? Fundamentally, they are playing out items. Instead of taking the anchor on Camera 2, you are taking the CBS Network. It’s kind of the same thing.”

That led Hundemer and his team of developers to create the BRUTUS master control media management and sequencing system.

BRUTUS was written to make “the actual control point ambiguous,” says Hundemer. In other words, any Tribune station can control BRUTUS running at another Tribune station provided there is about a 1 Mb/s connection between the two.

“This gives me is a really nice failure capability so that all of the equipment is still at the station, and all I am doing is remote controlling it,” he says.

The ability to do so has come in handy on more than one occasion, like the time a natural gas leak at Tribune’s Norfolk facility required workers to evacuate the building.

“I called one of my engineers at WQAD in Quad Cities, Ill., told them they had to take over Norfolk and within minutes they were in control of the facility,” Hundemer says.

Building the major systems needed to create, prepare and distribute content on air and via digital outlets has been a massive undertaking for Tribune. Being successful is as much about how one approaches this scale of project as it is about specific coding skills, Hundemer says.

Tribune always seems to manage to give staff a nice feature in a paid PR Ad for their resume’ before the staffer is out the door the next month.

I haven’t received that Tribune check yet.

Solid article about an amazing human. You got gist of his tech point of view and skillsets. The decent kind human behind it part of his magic. He makes believers and they make machines and software that works.

Thank you Mr. Kurz for this interesting story. Would love to read more nuts and bolts stories like this, partly because it’s inspirational and also, even though I’m on the very, very end of the spectrum in terms of television operations ( I run a tiny, one-man cable TV channel), I’ve had to develop much of my own software and do the integration myself. I found it interesting that Tribune developed a CG based on HTML and CSS. This parellels what I’ve done with a information graphics system I use for an “L-bar” display on my channel – though I’m quite sure Tribune’s version is 1,000 times more sophisticated!!