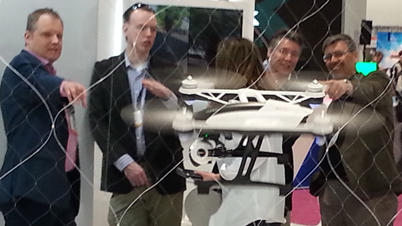 What’s standing in the way of drones for news isn’t the aerial technology, the cameras, the uplinks, downlinks or the operators; what’s standing in the way is the Federal Aviation Administration and the byzantine rulemaking process endemic to Washington. Congress, meanwhile, is putting a lot of pressure on the FAA to get commercial drones in the air, fearing that the U.S. will find itself behind the technology drone curve compared to European countries. The FAA put out a notice of proposed rulemaking in February that will simplify the process of getting news drones in the air.

Drones: you can buy ‘em, but it’s tough to fly ‘em legally if you want to cover news

For all the obvious newsgathering potential of drones and for all the wall-to-wall NAB Show sessions and exhibit hall booths hawking camera-equipped quadracopters, drones for news are still pretty much a flight of fantasy in the United States.

But that doesn’t stop broadcasters from thinking about the possibilities of drones for their newsroom.

“When there are disasters — floods, damage after tornados, or snow events — drones can provide a perspective you might not be able to see any other way,” Barbara Maushard, VP of news for Hearst Television, said during a session on emergency journalism. “We could rescue people with the help of drones, just as we’ve used our helicopters to help first responders. Drones would be a valuable tool for news.”

Before a company can fly a drone for commercial purposes — the FAA considers newsgathering, despite its obvious public service value, to be a commercial endeavor — it needs a Section 333 exemption from the FAA. While the agency has recently streamlined the process of approving exemptions for film and TV use of drones, getting an exemption is still an involved, bureaucratic process.

There are drone companies like Las Vegas-based ArrowData that provide a package of drone services that includes working with stations to compile their application for a 333 exemption.

The other alternative is for stations to hire a company, such as an existing news chopper firm, that already has a Section 333 exemption for drones. That’s the approach CNN took when it covered the 50th anniversary commemoration event at Selma, Ala., and the 20th anniversary of the Oklahoma City bombing.

Exemption in hand, the basic rules for drones are straightforward: Fly below 200 feet, be able to see and avoid obstacles, don’t be reckless and stupid, steer clear of airports and aircraft and keep your drone in sight. So far, so good, but there is one more rule that is limiting the utility of drones for news: small unmanned aircraft may not operate over any persons not directly involved in the operation.

“The FAA assumes that a drone will fall out of the sky. It happens. They crash once in a while,” said Linda Ellman, co-chair of the unmanned aircraft systems practice at McKenna, Long & Aldridge in Washington. “Until the technology improves such that policy makers consider them very safe, they are going to require that drones are flown away from people.”

When CNN used drones in Selma and Oklahoma City, it had to fly the drones just before dawn, when there weren’t any people on the Edmund Pettus Bridge or around the Oklahoma City memorial.

Hoping to move drones from B-roll to hard news, CNN has entered into a partnership with Georgia Tech and the FAA to determine the safest way to incorporate drones into the national airspace.

“We provide our input as journalists and as news producers. We’ve been working with Georgia Tech to determine how can we fly, what can we fly, what are the benefits,” said Agvent. “Georgia Tech does all the heavy lifting for engineering and documentation which we feed to the FAA.”

Congress, meanwhile, is putting a lot of pressure on the FAA to get commercial drones in the air, fearing that the U.S. will find itself behind the technology drone curve compared to European countries. There have been several hearings in both chambers of Congress.

“When it comes to the government moving at the speed of innovation, we are being left behind,” said Sen. Cory Booker (D-N.J.) during a recent commerce committee hearing.

Feeling the heat, the FAA almost immediately eased up on its pilot restrictions and streamlined the exemption process for film/television production and aerial data collection, the two most common categories of drone exemption requests it receives.

But speed in D.C. is a very relative term, especially for a rulemaking.

“The federal government was mandated to integrate drones into our airspace by 2015. It’s not going to happen in 2015, but at least we are all on the way,” said Ellman. “We are hoping that in two years we will have a final rule which will govern the use of drones here in the United States.”

The FAA put out a notice of proposed rulemaking in February itemizing new rules that will eliminate the need for individual exemptions and simplify the process of getting news drones in the air.

“As we regulate we are conscious of not inhibiting technology. We’re trying to be sensitive to the balance between safety and innovation,” said Dean Griffith, an attorney in the regulations division of the FAA, during an NAB Show drone panel.

The proposed new rules, aside from eliminating the individual exemption requirement, would raise the ceiling to 500 feet, but still require line of sight, daylight operation and that the drone steer clear of persons not involved in the fight.

As it stands now, the two rules that inhibit the use of drones for news aren’t being considered for change in the FAA’s new rulemaking. “There’s no mention of specific risk mitigations necessary so you can fly over populated areas. They don’t address it, they just say no. Beyond visual line of sight rules, how are we going to get there?” asked CNN’s Agvent.

Agvent’s advice to broadcasters: Don’t sit on the sidelines. “If you have the interest and wherewithal and you want to fly, you should comment if you see yourself as a stakeholder and want to play in this arena,” he said.

Comments to the agency can be submitted at this link.