Back to TVNewsCheck Home Print this page
SMPTE 2014

Embracing Change Is What SMPTE’s All About 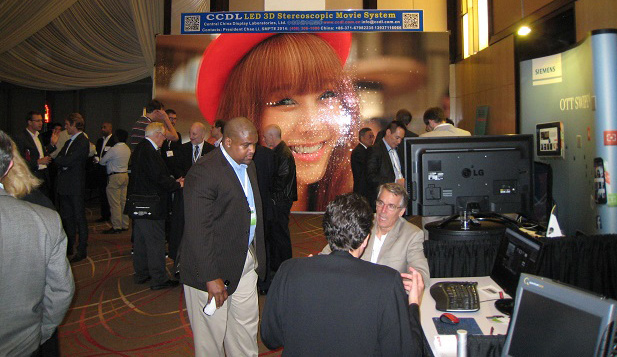 The annual tech conference and exhibit reflected the evolution toward IP and OTT offerings in presentations, speeches and papers. It also featured suggestions on how traditional TV and film companies can move together with the newcomers toward a shared future. By far, the hottest topic was “Networked Media in the Facility” with 10 papers, ranging from an overview of audio-video bridging standards to how IP can be used to transport and switch video content in live productions. Attendees have one day left to visit the 85 exhibitors at his year's gathering.

The Society of Motion Pictures & Television Engineers faces a challenge similar to the TV and film industries it aims to serve: remaining relevant and vital at a time when an entire generation is more likely to pick up an iPad or smartphone than flip on the TV or visit the theater.

But at the 2014 Annual SMPTE Conference & Exhibition, which closes today at the Loews Hollywood Hotel, there was no consensus on how to meet the challenge.

Mark Aitken, VP of advanced technology at the Sinclair Broadcast Group, issued a call to arms.

During his lunchtime speech Oct. 21, Aitken said the TV industry is “at war” with new over-the-top (OTT) content providers and wireless carriers. The sooner the TV industry comes to grip with the threat, the quicker it can mount an effective response.

But others welcomed the OTT disrupters into the SMTPE ranks.

“We have really attracted a wide variety of traditional motion picture and television technical types to the conference, but more importantly, I think we have attracted a lot of adjacent market technologies, such as Netflix and other over-the-top players,” said Bob Seidel, VP of engineering and advanced technology at CBS.

And some 600 attendees jammed into a room to hear Chris Fetner, director of content partner operations at Netflix discuss how the OTT giant is adopting the interoperable media format (IMF) to reduce the number of defective files it receives from its supply chain and streamline its workflow.

The IMF is based in part on SMPTE’s digital cinema interoperability.

“Within the Netflix supply chain we see a wonderful opportunity to return to the days of the 1% defect rate, to simpler times when everybody made the same thing and took the same thing,” he said.

“We believe IMF is the key to this — a common standard from which all other derivatives can be made, whether it is serving platforms like ours, the next generation of Blu-ray, the DPP [Digital Production Partnership] in Europe, broadcasters domestically or UltraViolet. All distribution paths can start with IMF.”

By far, the conference’s biggest single program topic was “Networked Media in the Facility.” During the three-part focus on networked media, 10 technical papers were presented, ranging from an overview of Ethernet AVB (audio-video bridging) standards to how IP can be used to transport and switch video content in a live production scenario.

“Those 10 papers together really said a lot about how we are going to move together into the future,” said Al Kovalick, founder of Silicon Valley-based Media Systems Consulting and chair of the networked media program.

“This is the first time really … that we have had so much discussion on this at this level. IP is not theoretical anymore. The rubber has met the ground, and we are going forward.”

In a related vein, the conference program offered a two-part look at developments in file-based workflows.

Chaired by Sara Kudrle, a SMPTE governor and product marketing manager of monitoring and control at Grass Valley, the presentations examined some of the most difficult workflow challenges facing the industry, such as file conversion and closed captioning, as well offering an update from the Joint Task Force on File Formats and Media Interoperability.

The workflow presentations also included a paper by Juan Jose Anaya of SAPEC in Spain and Damian Ruiz from Polytechnic University of Valencia, Spain, on high-efficiency video coding, HEVC and interlacing.

While the compression scheme did not overtly provide for compressing interlaced video, the sheer amount of 1080i HDTV makes it critical to address interlacing. Ruiz presented results from his HEVC work with interlaced video in which he used source material with everything from minimal movement, such as video of flowers, to the fast action of a basketball game.

“I think those in attendance got to see that interlaced is still out there, and it’s not just going to go away overnight no matter how much anybody wants it to,” said Kudrle. “It is around, and we are going to have to deal with it. And the nice thing is that although HEVC wasn’t designed to work with interlace, they have found a way to make it work, and the gains they were seeing were substantial.”

The conference program also offered insight into high-frame-rate video. Attendees heard from David Richards, VP of engineering at Moving Image Technologies, on how 120 fps (frames per second) may one-day become the production format for motion pictures.

For those with a TV orientation, separate presentations from InSync Technology and Isovideo discussed frame rate conversion to and from 120 fps material.

Jim Defilippis, formerly EVP of digital standards at Fox and now the principal of TMS Consulting, who chaired these papers, had a big hand in making them possible.

Prior to the SMPTE conference, Defilippis traveled to the ESPN Wide World of Sports in Orlando and shot 120 fps material that was license-free and lent it to InSync Technology, Isovideo and a company working with Richards on his presentation, so that they had 120 fps source material from which to work.

“The big takeaway [from the papers] is you can absolutely shoot at a high frame rate,” said Defilippis. “And why do you want to do that? Because later on you can decide what you want to do with it. For live events, it means I can go do World Cup soccer, [or] I can do the Olympics in one production format for multiple outlets.”

As in years past, the exhibition at the SMPTE event was small. Some 85 vendors showed everything from existing technologies, such as Vidovation with a productized version on an IP camera back developed by BBC, to pure technology demos, such as Fraunhofer with its MPEG-H immersive audio, which the company is offering for consideration as part of the next-gen ATSC 3.0 TV standard.

Barbara Lange, SMPTE executive director, was tightlipped about the precise number of attendees visiting the booths and conference sessions, but both Seidel and outgoing SMPTE President Wendy Aylsworth, senior VP of technology at Warner Bros., said attendance was up from last year.

From the looks of things in the sessions and at the exhibits there appeared to be about 1,000 people attending.

Day two of the conference wrapped up last night with an event kicking off the society’s Next Century Fund. SMPTE, which will celebrate its centennial in 2016, is establishing the fund to support programs and services to advance the growth of the industry and its members.

“We know the next 100 years are definitely not going to be like the first and new entrants like Netflix and others are changing and challenging every aspect of the media workflow and the technology tools the business needs,” said Lange.

During the evening’s cocktail reception, Lange announced that Disney, Panasonic and Dolby together have committed to contribute $1 million to the fund over the next three to five years.

Lange also read from a December 1938 article written by Walt Disney for the society’s journal during her remarks. Disney’s observations seemed apropos to what the society today seeks to do with its Next Century Fund.

“ ‘Over at our entertainment factory, we are training hundreds of brilliant youngsters to carry on a job far beyond where we old-timers must leave off,” she said quoting Disney. “‘They will train other youngsters. There is no knowing how far steady growth will take the medium if only the technicians continue to give us new and better tools….

” ‘We the last of the pioneers and the first of the moderns will not live to see this future realized. We are happy in the job building its foundations.’ “