Future Of NBC’s Live Musicals On The Line 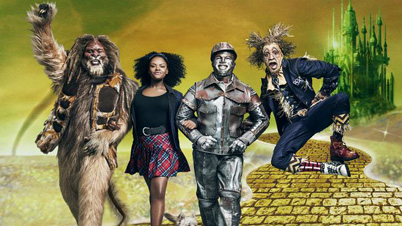 Two years ago, NBC's The Sound of Music was alive for a huge audience of 19 million viewers. But last year, Peter Pan Live crashed with less than half that. So the pressure is on Craig Zadan and Neil Meron, producers of tonight's The Wiz Live, to deliver.

NEW YORK (AP) — Tonight, a determined girl named Dorothy will ease on down that road in NBC’s “The Wiz Live!” Hers is an odyssey that began in 1900 with the publication of L. Frank Baum’s “The Wonderful Wizard of Oz” then continued with the classic 1939 movie musical starring Judy Garland, followed by the 1975 Broadway production of “The Wiz” (which, billed as “the Super Soul Musical,” won seven Tonys, including best musical) and, in 1978, by the film starring Diana Ross.

To transform “The Wiz” yet again, this time into a live TV extravaganza to air from 7-9:45 p.m. Denver time, is anything but easy. For weeks the star-studded cast (including Elijah Kelley, Ne-Yo, David Alan Grier, Mary J. Blige, Queen Latifah, Uzo Aduba, Common and newcomer Shanice Williams as Dorothy) has mustered at Long Island’s Grumman Studios (the one-time Grumman aeronautics complex where the Apollo lunar module was built that put man on the moon). Ahead of their one-night-only trip to Oz, they and the executive producers talked about the production.

“People think, ‘Oh, you’re doing “The Wiz” because “Empire” is such a big hit,'” says Craig Zadan, who is producing the show with longtime partner Neil Meron. “The truth is, staging this musical has been a dream of ours since the ’90s, but the rights were tied up. It’s just coincidental that, this year, when we were choosing a new musical, the rights were cleared.”

“Both of us loved the original Broadway production,” Meron said. “But ‘The Wiz’ is a cultural touchstone in the black community, with an emotional connection we didn’t really know about until we were doing it. Bottom line: ‘The Wiz’ is phenomenal entertainment. And even with the racial divide at its highest point in decades, we want to put that on pause and do something for the family and for the spirit and have a great time.”

Kelley (who co-starred in “Hairspray” and here plays the Scarecrow): “Understanding the ability to conquer your fears is one of the things that propels you to any success you desire. That’s what ‘The Wiz’ is about.” Grammy-winning singer-actor Ne-Yo (the Tin Man): “Everybody thinks, ‘I’m not pretty enough,’ ‘I’m not thin enough,’ ‘I’m not this-or-that enough.’ But none of that is true. ‘The Wiz’ teaches you that everything you need to make your dreams come true is already there inside you.”

Williams, a 19-year-old New Jersey native chosen from hundreds of hopefuls, had appeared in her middle-school production of “The Wiz.” But she had been “too scared” to try out for Dorothy, instead scoring the part of Addaperle, Good Witch of the North. “But when there was an open call for the TV production, I went, just for the learning experience,” she says. “Then they kept calling me back and calling me back. There was finally a point where I was like, ‘Hold on! I might actually get this.’ Now I’m having the time of my life!” And at her side is Stephanie Mills, who here plays Auntie Em but was the original Dorothy in the Broadway production.

Actor-comedian Grier (on his Cowardly Lion getup): “It is so very hot, sir! I’m a fuzzy stovepipe!” Ne-Yo (on his Tin Man costume): “It’s 30 or 40 extra pounds. And it doesn’t breathe!” Kelley (on his Scarecrow duds): “The costume isn’t heavy, but I have to always stand like this,” and he demonstrates an ache-inducing bandy-legged posture. “What I don’t have to deal with in my costume, I make up for with muscle contortion.”

For Ne-Yo, the biggest challenge is “trying to figure out what you can bring to the role. There’s no topping Diana Ross or Michael Jackson (the film’s Scarecrow) or Nipsey Russell (its Tin Man). Instead, you have to ask yourself, ‘How can I add to the legacy of my character?’ ” Meanwhile, Zadan and Meron hope to continue their partnership with Cirque du Soleil and take this new production to Broadway next year. They have designed it in a more proscenium-like style than their cinematic “Sound of Music” and “Peter Pan” live specials. An important visual device: digital effects played across huge LED panels. Like the tornado: “It’s incredible!” says Zadan. “We’re going in visual directions that are new to television.”

Just before airtime, Ne-Yo will be telling himself: “You know what you’ve rehearsed for, so get out there and do what you know you can do and just be great!” “I’m ‘anticipitatious,’ ” Grier said. “I’m anticipating the anticipation. But that’s good nerves. We’ll be ready!” “If you don’t pray, worry,” Williams said. “But don’t worry, if you’re gonna pray. And I’m praying every day.”

Two years ago, “The Sound of Music” was alive for a huge audience of 19 million viewers. But last year, “Peter Pan Live!” crashed with less than half that. “Carrie Underwood clearly drove ‘The Sound of Music,’ ” Zadan said. “For ‘Peter Pan’ we had terrific actors, but not stars, and we did not do nearly as well. ‘The Wiz’ is contemporary, and the music is R&B-cool, plus the cast is amazing — with no shortage of stars!” “We love the tradition of a live holiday musical every year,” Meron said. “And the only way that’s going to continue is if the numbers are up this year. So the pressure is on for this show.” Zadan agreed: “The future depends on how ‘The Wiz’ does.”

Call me sentimental for live TV, but I am really excited about watching these performances. The Wiz tonight and Grease Live on Jan. 31st. Of course, I want to be entertained, but I also don’t mind seeing some imperfection and how the cast and crew recover…the hallmarks of live performance.

Ah, but putting up The Wiz Live against Thursday Night Football (CBS) may be a mistake. But on the other hand, NBC will also tape the performance for (1) the West Coast and (2) a repeat, probably on a Saturday Night.