Getting Up To (High) Speed On Super Slo Mo 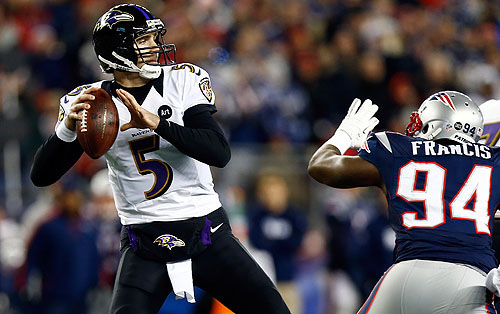 For the big game, CBS will take advantage of recent developments in 4K high-speed and high-resolution videography to not only slow down action in replays without noticeable motion blur or pixilation, but also to zoom in closely to see if a player’s foot is out of bounds or if the football breaks the plane of the end zone. Other networks are also working to push the envelope with high-speed, high-res cameras and Sony is working on next-generation sports production technology.

CBS Sports chief tech Ken Aagaard didn’t get the nail-biting moment he was hoping for in last weekend’s AFC Championship game in which the Baltimore Ravens upset the New England Patriots — the moment when the play is too close to call on the field, the one that keeps millions of TV viewers on the edge of their seats.

Now, he’s hoping the chance will come Feb. 3 during Super Bowl XLVII when the Ravens square off against the San Francisco 49ers in New Orleans’ Mercedes-Benz Superdome. “We need that controversial moment … where we can help make the difference in the game,” he says.

And if it comes, he promises, he and the rest of the CBS production team will be ready.

For the big game, CBS will take advantage of recent developments in high-speed and high-resolution videography to not only slow down action in replays without noticeable motion blur or pixilation, but also to zoom in closely to see if a player’s foot is out of bounds or if the football breaks the plane of the end zone.

CBS will use its Heyeper Zoom system — six For-A FT-One 4K cameras capable of shooting 500 fps operating in tandem with the Evertz DreamCatcher replay system and Evertz Mosaic multi-image viewer.  Each camera costs $150,000. (Heyeper is pronounced “hyper,” but written with a bow to CBS’s famous logo.)

And to ensure it doesn’t miss any key moments of the game in slow motion, CBS will also deploy an additional five high-speed Ikegami/NAC Hi-Motion II 2K cameras in fixed and hand-held positions on the field.

“4K is allowing sports broadcasters to shoot at a longer distance and have the ability to zoom in because of the higher resolution,” says Jay Shinn, an account manager for For-A. “Of course, it will be down-converted to HD, but if you tried to do the same thing with a conventional HD camera, the picture would be very fuzzy.”

So if a wide receiver gets shoved out of bounds and a lineman is holding at the same time on another part of the field, Shinn says, CBS could use the same video to analyze both plays.

The Evertz’s DreamCatcher replay system is a perfect complement to the cameras, requiring fewer operators and providing better picture quality than its competitors, says Aagard. “It retains and plays back the video very efficiently.”

Replays are typically broadcast one at a time. But this year, CBS will use another Evertz product — its multi-image display Mosaic system — to show up to four images simultaneously in either a quad-split, three-way split or a two-way split.

With the zoom capability of the high-res cameras, viewers could potentially watch replays side-by-side that came from the same camera, Aagaard says. It will likely be used, however, to show potential scoring plays from multiple angles.

“When you have a bunch of guys go down in a pile at the goal line, there are typically so many bodies around there that one camera can’t tell where the ball is,” said Aagaard. “This will let our viewers watch the play from multiple angles simultaneously and help confirm a play.”

CBS saw NBC’s success with the Ikegami/NAC Hi-Motion II camera in last year’s Super Bowl. Capable of shooting at 1,000 frames per second, it confirmed that New York Giants’ receiver Mario Manningham had both feet inbounds on the catch that clinched the championship. But that specific video was shot between 300 and 400 frames per second, says Alan Keil, director of engineering for Ikegami USA.

“You wouldn’t typically shoot football at anything close to 1,000 fps,” Keil says, adding that any time you cut exposure time in half, you need twice as much light. That makes shooting in the dark Superdome a bit of a challenge. “I’ve heard it can be tough in that venue.”

That’s why CBS installed 300-foot candle lights throughout the dome in August. Aagaard says he’s not concerned about his 300-to-450 fps shots looking dark on Super Sunday. “We now have more than enough light to work with and should be able to shoot at any angle.”

Even though high-frame-rate replays create fascinating visuals, CBS may not be able to show them off as much as it would like.

Much depends on how often the coaches and refs in the booth demand replays. All scoring plays and turnovers are automatically reviewed.

The referee watches the same replay that’s broadcast, Aagaard says. “When replay and challenges really started, we never wanted to have the NFL looking at something different that we don’t see in our program monitor. To show it makes all the difference in the world.”

The frequency of replays also depends on the pace of the game.  “The biggest problem in trying to show off high-speed replays is that it simply takes longer to playback,” says Aagaard. “For some teams, you only get a second or two, then you have to be back at the line of scrimmage. Certainly not having a hurry-up offense like New England in the Super Bowl helps to give us more time to show off the technology.”

Tyson Langland of Bleacher Report says the Ravens and 49ers run a similar offense in which they take their time between plays, but adds that the 49er’s rookie quarterback Collin Kaepernick could surprise fans by rushing his team back to the line. “San Francisco hasn’t run a whole lot of no-huddle this season, but that doesn’t mean they won’t against Baltimore.”

Fox has also been pioneering the use of high-speed, high-res cameras, using them in its football playoff coverage this season in and the 2012 World Series last fall. With its more leisurely pace, baseball makes ample room for replays, says Jerry Steinberg, VP of field operations.

For its “X-Mo” ultra slow-motion replays, Fox employs a Vision Research V642 high-speed camera equipped with a Canon HD lens. It also uses Sony’s F65 4K cameras with a Fujinon cinematic lens to produce the high-res images that allow for the zoom-ins, he says.

“This equipment helped us create some dramatic shots during the World Series, but it’s also really useful when the game needs our help to determine a controversial play,” he says.

Sony is working on the next-generation sports production technology. At this year’s NAB Show, the tech company will show off a new setup that stitches two 4K cameras together to give an 8K-wide canvas.

“Using two 4K cameras will allow you to show the entire playing field, so if you’re shooting a hockey game and a fight breaks out behind the play, you’re always going to have that shot to go back to and replay,” says Rob Willox, Sony’s director of marketing for large sensor cameras.

The rig places two 4K cameras side-by-side with the lenses crossing, meaning the right lens would shoot left and the left lens would shoot right. Software would automatically correct for the geometric distortion of the two cameras, making the picture look like it was shot with just one camera positioned straight at the playing field.

“The point in the middle would literally blend to create a seamless canvas 8K wide by 2K tall,” Willox says. “This would allow you to get a nine-fold increase in resolution.”

All of that information would be sent back to be recorded on a multichannel DVR and played back, just like any other replay system.

At this point, it’s just a concept, but could be an important step for more-advanced sports broadcasts. “Once this type of stitching technology is integrated with player-tracking technology, the possibilities are really exciting,” Willox says.

He also anticipates a more standard camera for sports broadcasting across the board.

“Right now, it seems like we’ve got a camera designed for one thing, but we’re using it for another,” he says. “What everyone wants is optimization. They want their cameras to feel like their other cameras — not an orphan.”

Aagaard anticipates the networks will use high-speed 4K cameras for entire sports productions within the next five to seven years, even if there isn’t a medium to deliver all the resolution to TV in the home. “We’re still paying the bills from going HD, so it’s going to take some time.”