Hearst Goes To The Cloud For Ad Delivery 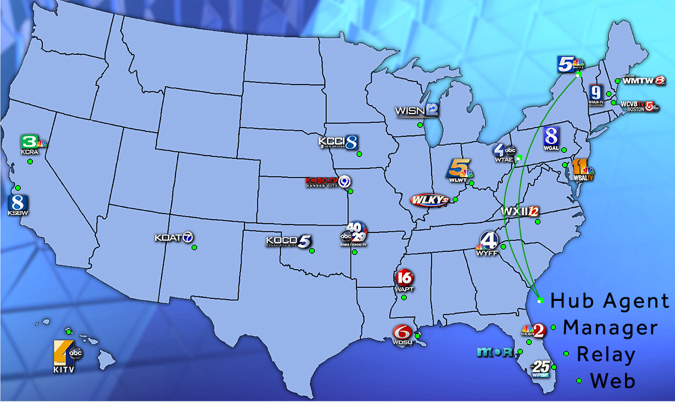 Jim Lange, operations supervisor for WESH Orlando, Fla. (DMA 19), and Hearst Television’s content distribution center there, remembers when his station switched from 2-inch to 1-inch tape and then to Beta cartridges.

“That was a huge change from the quad tapes and the film chains from even farther back,” says Lange.

After 30 years in the business, he now watches thousands of ads fly through the cloud.

Spots are uploaded to a central hub at WESH and relayed through the cloud to the individual stations where they’re scheduled to play. Signiant’s solution streamlines the operation by transcoding the ads, tying them into the station’s traffic and billing platform and creating a receipt to ensure they played on air.

“The workflow is night and day,” Lange says.

Before the ad delivery system was in place, spots would come in from tape, DVD or through an FTP site, like ExtremeReach or DG, the two major national ad delivery companies.

The new workflow does is much simpler, according to Hearst execs.

“Literally, it’s hands off,” says Marty Faubell, VP of engineering. “From the minute the file is delivered from any [commercial provider] into our system in Orlando, it gets moved, it gets flipped into our server format and off it goes. We’re doing several thousand a week.”

Signiant is marketing the system as a cost-effective alternative, saying it saves stations resources, tape and shipping costs and offers a new way to enable more late selling of commercial time.

“When you go to the local level, you have Bob’s Auto Body delivering a DVD to the station, heaven forbid they deliver a VHF tape, or it may be more sophisticated, but the only way they have to send it is FTP, which is very slow,” says Tom Canavan, Signiant VP of strategic development.

“With this, Bob’s Auto Body can open their regular browser, drag and drop their local spot and then click ‘send.’ It shows up securely and accelerated and with an audit trail in the station’s email inbox.”

Lange says the Hearst started with national ads because they have been file-based for several years. Lange also wants his team to understand the new system before taking it to the local level.

“You never just jump in with everything at once,” says Lange. “We’re working our way down the list. Once we roll it out, the local ads will essentially be like national ads.”

Lange says the old workflow took anywhere from five to 10 minutes per spot to complete — even for national ads that were grabbed from an FTP site.

The first problem with big FTP sites, says Lange, is that it took time to find the specific commercial.

“And you hope they found the right one, because when you’re looking at a 25-character ISCI code, and see a ‘J,’ but copy over the ‘K’ version, you run into a human operator error right off the bat,” Lange says.

Once the ad is on the desktop, the operator needed to determine if it was in SD or HD, then rename it to the house ID and drop it into a server, like Nexio.

After the spot was uploaded to the server, the operator needed to mark the in and out points and make sure it matched up with what the traffic department had in its logs. While all of this went on, the operator also needed to make sure the video quality was acceptable and the audio levels followed CALM Act requirements.

Only after all that was the ad put into the database, ready for delivery.

The new system, he says, only takes about the length of the ad — about 30 seconds on average — to prep for air. As a result, he says, station staff is now doing what they should be doing: monitoring the off-air signal.

“Back in the day, master control was one TV station — they had one stream they were looking at. For us [at WESH], it’s the NBC affiliate, the CW affiliate, Estrella, ThisTV and MeTV, so now master control has five streams and five playlists. It gives them a lot more time to make sure that is correct.”

“From an operations point of view, a list is brought down that says this is what’s in there, ready to go, and we look at it, for that last line of defense right at the database, and it’s ready to go,” Lange says. “It’s pretty immediate.”