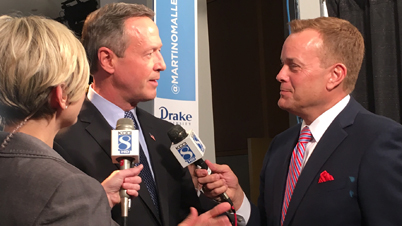 Hearst Television Inc. is enlarging and updating its biennial pledge to devote extensive television and digital news coverage of election discourse across throughout its 26 TV markets across the United States.

Under the group-wide “Commitment 2016” banner, Hearst Television will continue its policy of a 12-minute minimum airtime commitment per day in the 30 days leading up to the 2016 general election and in some select primaries.

The stations also will continue to produce, among other elements, local, regional and national debates and on-air and online “Truth Check” and “Issue Check” segments vetting campaign statements and the accuracy of campaign and PAC advertising.

For 2016, Hearst stations will introduce “Candidate Accountability” features for its TV and digital platforms, for which Hearst Television journalists will explore whether candidates kept campaign promises — and if not, candidates will be invited to explain why not.

The stations will also launch “8 Issues/8 Weeks,” a three-pronged approach to reporting candidates’ positions on eight major issues in the eight weeks leading up to each state’s presidential primary within the Hearst Television coverage area.

Candy Altman, Hearst Television’s VP of news, talked to TVNewsCheck more about these new efforts. “The ‘8 Issues/8 Weeks’ first rollout is the week of Dec. 7. ‘8 Issues/8 Weeks’ takes the big topical issues in the presidential campaign and will focus on them each week in the eight weeks leading up to a state’s primary. The first caucuses are in Iowa — eight weeks out would be Dec. 7, so KCCI [Des Moines] kicks it off. We’ll be having our Washington bureau do a piece that frames each issue — not individual candidate responses on that issue, but what’s the issue.

And then, we’ll be sending people that see that” to the website “for what will be an issues grid that will allow people to compare the candidates’ positions on that issue. We’ll be doing that for each issue. And in addition, we’ll have sound from each candidate on that particular issue.

“In addition, we’re going to be trying something different on social media. Our social media team will take that material that we do for television and create a visual piece for Facebook that will also run in that week period for each particular issue. That will give us a chance as we roll [‘8 Issues/8 Weeks’] out in individual markets to see what people are doing with it [on social media] and adjust it as we move forward.

“In addition, where applicable, the station will do a local piece related to that particular issue [to complement the national story done by the Washington bureau.]

“The ‘Candidate Accountability’ feature [gets underway] as we head to the fall elections — congressional, gubernatorial, Senate,” Altman added. “Given the voter anger with things not getting done in Washington, we think it’s very important for people to be able to take a look at what was promised versus what was delivered and allow the candidates to talk about that. We think there’s an important service there.” (Altman will appear on the Elections 2016 panel at TVNewsCheck‘s NewsTECHForum, Dec. 14-15 in New York.)

Jordan Wertlieb, president of Hearst Television, added: “Audiences are increasingly demanding intelligent, in-depth coverage of the issues and how they impact their local communities. Hearst Television stations continue to invest in ways to meet that demand, with a commitment to generate in-depth political content and vehicles that advance discourse between candidates and their constituents on every available platform.”