Back to TVNewsCheck Home Print this page
COMMENTARY BY FRAZIER MOORE 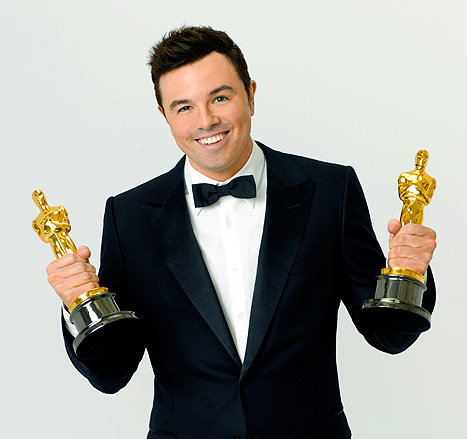 Best-known until recently as the bad-boy creator and character voice behind Family Guy and last summer's hit film Ted, Seth MacFarlane seized the camera Sunday as host of ABC's Oscarcast and proved to its vast audience that he's a ridiculously versatile entertainer, a guy who can be as charming as he is famously irreverent, even polarizing.

NEW YORK (AP) — He ruffled feathers. He maybe even turned some viewers off.

But it’s likely no one turned off Seth MacFarlane.

Best-known until recently as the bad-boy creator and character voice behind “Family Guy” and last summer’s hit film “Ted,” MacFarlane seized the camera Sunday as host of ABC’s Oscarcast and proved to its vast audience that he’s a ridiculously versatile entertainer, a guy who can be as charming as he is famously irreverent, even polarizing.

Here’s a guy who could toss off a joke Bob Hope might have delivered decades ago (“It’s Sunday. Everybody’s dressed up. This is like church — only with more people praying”), then carry off a deliberate groaner like his wisecrack that, while, an actor like Daniel Day-Lewis really captured Abraham Lincoln in his Oscar-winning performance, “I would argue that the actor who really got inside Abraham Lincoln’s head was John Wilkes Booth.”

Viewers could have gotten fair warning of what to expect from MacFarlane last fall when he hosted “Saturday Night Live” with skill.

But this Oscars hosting gig was the Main Event, and he earned a large measure of credit for keeping the show in satisfying equilibrium.

This was an elegant affair, including a surprise appearance by first lady Michelle Obama, live from the White House, who announced the best picture.

The lovely stage setting glowed and shimmered. And it was put to good use in a show-stopping production number saluting movie musicals including “Chicago,””Dreamgirls” and “Les Miserables,” performed by stars from those films.

On a program that honored the 50th anniversary of the James Bond films, Adele wailed the theme song from the newest, “Skyfall.” Far juicier, Shirley Bassey belted out the theme from “Goldfinger” about as forcefully as she did in 1964.

And accompanying the In Memoriam tribute, in a year that saw the passing of composer-songwriter Marvin Hamlisch, Barbra Streisand made a rare television appearance to sing “The Way We Were” in his honor.

(If any of the studio-perfect performances raised suspicions of lip-syncing, the academy declared all the singing was done live.)

Speaking of music, the orchestra got surprisingly aggressive forcing off winners in mid-acceptance, often with the sinister theme from “Jaws,” of all things.

But silver-tressed Claudio Miranda, accepting the best cinematography Oscar for “Life of Pi,” didn’t need the hook. Beginning with “Aw, gee, wow,” he seemed to be channeling Diane Keaton in “Annie Hall” as he gratefully stumbled through his thank-yous with a series of gasps, sentence fragments, and finally his own self-imposed wrap-up, “Oh, my God, I can’t even speak.” In his brief appearance, he became the patron saint of any viewer who was ever forced to speak in public from the heart – and crumbled.

Few presenters knocked it out of the park in their fleeting turns, but none had viewers’ teeth grinding.

Yes, MacFarlane had his moments of dubious taste. What did anybody expect who’d ever spent a moment with “Family Guy”?

But did he really cross the line when he described “Django Unchained” as “the story of a man fighting to get back his woman who’s been subjected to unthinkable violence — or, as Chris Brown and Rihanna call it, a date movie”?

Especially on a night where everyone else seemed to be on their best behavior, MacFarlane’s strategic misbehavior furnished welcome relief.

In interviews beforehand, he had spoken of his hope to strike a balance between respect for Hollywood and some necessary sass. Mission accomplished.

Leading-man handsome with a gleaming smile, he began the broadcast without a net and looking totally relaxed: Alone on the stage, he delivered a series of one-liners, most of which scored. (The Oscarcast was being watched by “close to a billion people worldwide,” he intoned, “which is why Jodie Foster will be up here in a bit to ask for her privacy.”)

Then he opened the door to his reputation for raunch with the appearance on a video screen of William Shatner as “Star Trek’s” Captain Kirk, who had arrived from the future to scold MacFarland in advance for the hosting performance he was just starting.

“The show’s a disaster,” declared Shatner.

As evidence, he pointed to an “incredibly offensive song that upsets a lot of actresses in the audience.”

With that, a pre-taped production number featured MacFarlane singing “We Saw Your Boobs,” saluting a roster of actresses who have bared themselves in their films.

But then, in an effort to atone, MacFarlane sang a classy rendition of “The Way You Look Tonight” accompanied by Charlize Theron and Channing Tatum in dance.

Not good enough, said Shatner, who then revealed a video clip where MacFarlane, costumed in a Flying Nun habit, hit on Oscar nominee Sally Field in the green room.

Back and forth went the routine: Bad Seth and Good Seth. Both were very funny, stewarding a broadcast that never went askew.

I thought Mr. MacFarlane gave his all but was god-awful. He did not fill the room. Sorry.

This was the first Academy Awards I’ve ever watched because it was actually interesting and funny. Sure, some of the jokes were a bit edgy, but Seth McFarlin is a highly intelligent, musically talented guy. Finally, something different in Hollywood!

I just thought MacFarlane created cartoon shows. Who knew? He was funny, engaging and a pretty good singer. Not perfect but overall very good. The bit with William Shatner went way too long. But I’d much rather watch Seth MacFarlane host the Oscars then sit through another show hosted by Anne Hathaway and James Franco. That was a disaster!!!

Huh? We must not have been watching the same show. Absolute crap for a host–awkward, ill-timed and lame. Started off bad, got worse–even the presenters gave him off-script snarky comments. Dame Shirley Bassey sure hit the home run of the evening, though. Mr. Moore–do you work for Mr MacFarlane? From the “review” above it sure seems like it.

A bunch of rich folks getting awards…….who cares…..meh.
MacFarlane was the only good thing about it.

Seth MacFarlane is an extremely talented guy who should not be ashamed of Oscar outing…it was the only real thing going on in a program that is full of fantasy and general BS, you want the show to be better…STOP thanking everyone on the planet for WINNING and making a bunch of BUCK$ do so…Seth you were FANTASTIC! and I don’t work for him…I just appreciate solid creative talent…you should too your in the Media business…otherwise why are you HERE?