In Praise Of Women Who Tech

TVNewsCheck honors six individuals for their contributions to television technology with presentations of its annual Women in Technology Awards. (Photo by John Staley)
By Jennifer Pallanich | April 9, 2019 | 11:50 p.m. ET. 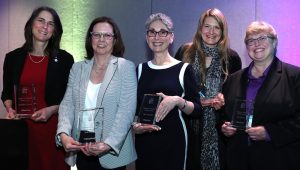 LAS VEGAS — TVNewsCheck turned the spotlight on six women during annual its Women in Technology Awards ceremony Tuesday at the NAB  Show here, including the first woman to be named VP of broadcast engineering at ABC.

Tish Graham, winner of the Women in Technology Leadership Award, has smashed one of the industry’s hardest glass ceilings, said Kathy Haley, co-founder and publisher of TVNewsCheck. After being named the broadcast engineering VP for ABC Owned Television Stations in 2015, she was told to overhaul the group’s technology and prepare for a future that included disrupted revenue streams and multiplatform news production.

“Tish had to nudge a disparate team of local engineers into a new way of doing things while making gutsy decisions on investing in technology,” Haley said. “She got the job done.”

“When I started in the industry, there weren’t that many women,” Graham said. “It’s not an exaggeration to say I was the first at virtually everything.”

She attributes some of her career success to not saying no when asked if she knew how to do something. Part of that advice came from a mentor, who advised her to “take risks, ask questions, never say no to an opportunity and just figure it out. It was sound advice when he gave it, and it is sound advice today.”

Graham received the top honor in TVNewsCheck’s Women in Technology Awards, and five other women were recognized for contributing significantly to the advancement of their industry or who show great promise of doing so.

TVNewsCheck recognized Madeleine Noland, new ATSC president (and until just recently, senior adviser, technology and standards at LG Electronics), and Abby Auerbach, who is executive vice president and chief communications officer at TVB, with Technology Futurist Awards. The futurist awards recognize women who epitomize the quality of taking a long-range view of where the television industry should be moving and figuring out how to get it there.

Noland, Haley said, is a futurist who has gained the industry’s respect for shepherding the ATSC 3.0 standard to completion. Noland was named president of ATSC last week. She is also active with the guidelines work group of the Ultra HD forum, a consortium of broadcasters, service providers, consumer electronics and technology vendors that are collaborating to speed UHD deployment.

“I have never felt like a woman in a man’s world,” Noland said. “I have always felt like a complete equal.”

When Auerbach was EVP at the Television Bureau of Advertising, she led the effort to create ePort, an electronic portal to process agency orders that has since handled $30 billion in transactions between 700 ad agencies and 2400 TV stations.

“When station groups finally decided two years ago to form the TIP initiative to develop a technology framework for connecting the many vendors competing to automate ad buying and selling, Abby was there, pushing, prodding, explaining to industry decision-makers why they needed to support TIP,” Haley said. “As a standard, TIP has a way to go, but its impact is being felt sooner than anticipated.”

Technology innovation “may challenge some of our business norms,” Auerbach said. “But this is not a reckless evolution. If we don’t adapt, we will be overrun.”

Related Story  'Work from home' is new normal, so what's next for Ross?

Garner developed new products in remote production and service orchestration for Net Insight, and represented the company on the AIMS board of directors. She still serves on the board of the FKTG, Germany’s society for motion picture and television engineers.

Garner urged the industry to be more open to more formats. Technology, she said, is “where we always come together. Whether we are women or men, technology is the thing that is really connecting us.”

Grivois led the implementation of a satellite studio and guided the simultaneous multi-million digital build out of three NBC-owned stations. She also reviews applicants for the NAB’s Leadership Foundation and its Technology Apprenticeship Program and works with American Corporate Partners, a group that helps former military personnel transition to civilian jobs. When she noticed that WLWT wasn’t getting enough intern applications, she developed a relationship with the local Warren County Career Center.

“It’s important that we participate in mentoring programs. We are actively working with high school and Girl Scout groups to get the interest in television engineering and IT,” Grivois said. “We need that diversity in our group. We can do it if we think about taking that extra step and reaching out.”

Noland and her team have investigated the limits of human motion perception for high frame rate television applications and has been deeply involved with development work on Hybrid Log Gamma system for high dynamic range. Simon Rankine, who is project research engineer and head of the North Lab at the BBC, accepted Noland’s award on her behalf.