Back to TVNewsCheck Home Print this page
TECH THURSDAY 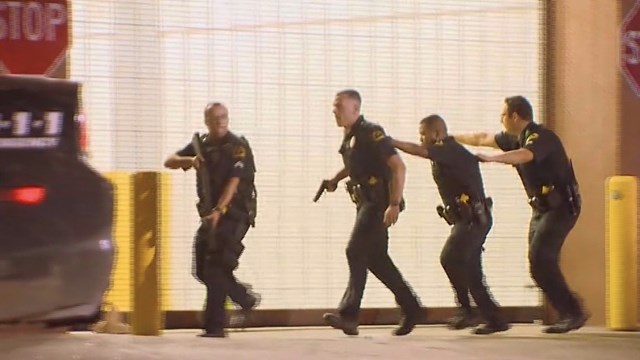 With the help of bonded cellular, two photographers from Tegna's Dallas outlet were able to provide live coverage of the July 7 shootings that took the lives of five police officers. During the melee, says news ops chief Bill Fesh, "we were still getting good HD quality pictures streaming back with only a second to a second and half of latency."

On July 7 in Dallas, two WFAA news photographers found themselves in the middle of sniper fire during a Black Lives Matter protest that took the lives of five policemen. The gripping live footage they captured not only documented what’s being called one of the darkest day in Dallas history, but also underscored how IP newsgathering is taking TV news into new territory unfettered by the constraints of traditional ENG.

“Now as you are covering a protest march over six or seven blocks, you are not tied to a truck on one corner of the street and just hope the protestors come down your street,” says WFAA News Operations Manager Bill Fesh.

“You can be embedded with whatever is happening, and that is what we got caught up in on that Thursday evening,” says Fesh, who has spent 35 years in the TV, many as a news photographer.

When the shooting started, WFAA photographers Josh Stephen and Brandon Mowry were in the middle of the action, Fesh says.  “You can listen to some their footage and it sounds eerily similar at times to sequences from Saving Private Ryan.”

Embedded with the marchers, Stephen and Mowry were long past a point when police could order them not to enter the area. Rather, they were taking instructions to get behind officers, duck behind vehicles and take cover behind trees, says Fesh.

“While this process was going on, we were still getting good HD quality pictures streaming back with only a second to a second and half of latency,” he says.

These circumstances punctuate how IP newsgathering is changing live reporting from the field.

“The difference between today’s capabilities and what you would have five years ago is that unless this happened while you were plugged into the microwave truck, you may have been capturing what was unfolding, but you would have to go find a way to transmit it back to your station,” says Fesh.

With bonded cellular, the newsroom can watch what is happening in real time, begin recording it and within 30 seconds have the footage in the hands of an editor to cut together for anchors to talk about moments after it’s arrived, he explains.

“That’s how quickly news has evolved because of cellular packs in the business.”

WFAA, like all its sister Tegna news-producing stations, relies on the TVU Networks’ TVU Pack in the field for live IP newsgathering. The TVU Grid makes footage from any Tegna news crew instantly available not only at the home station, but at all stations in the group — another benefit over traditional methods, says Fesh.

WFAA covered the shooting and its aftermath for 11 consecutive hours, and, during that time, the IP backpacks were “running with 95% to 98% reliability, delivering solid pictures,” he says.

“Maybe once in a while the picture would go a little soft and then come back,” he recalls. “That’s what cellular tends to do, but it never went away.”

Typically, with coverage of breaking news, the availability of cellular bandwidth is not an issue, he says.

However, at a large event where there are many people making calls and streaming video as well as lots of other news media, wireless IP backpacks can run into problems with bandwidth, Fesh says.

For example, a prayer ceremony the day after the shooting for the five officers (four police and one transit authority officer) who were killed and the dozen other injured was held in Thanks-Giving Square in downtown Dallas.

WFAA sent a satellite truck rather than compete for cellular bandwidth with the public and other news crews, he says.

Fesh is anticipating that the newest algorithms for bonded cellular backpack, such as TVU’s Inverse StatMux Plus, and services, like the TVU Cellular Assurance Network, as well as Ka-band satellite links will provide ways to overcome wireless bandwidth shortages in the future.

WFAA has submitted in its capital budget for next year a request for storm-chaser trucks equipped with Ka-band satellite links, says Fesh.

Not only will the vehicles, which are relatively lightweight and require no special driver certification, enable the station to use its IP newsgathering backpacks to cover storms and tornados in rural areas where cell service is spotty, but they also will provide WFAA with a way to cut through the congestion at crowded urban events, he says.

But won’t relying on a Ka-band vehicle for guaranteed bandwidth require news photographers to once again tether themselves to a fixed location, essentially negating the freedom of movement and true live performance IP newsgathering can deliver?

The station currently is conducting experiments with LiveU’s Xtender product. Fesh envisions using a Ubiquiti Networks’ wireless network in the 5GHz range along with the LiveU Xtender to allow news photographers to send live video wirelessly from their cameras to the new Ka-band vehicles for relay to the station.

“We did a test at our building and put a receiver in our lobby and went a good 3,000 feet away — a little more than a half mile — with busses going right in between us [the news photographer and the base station] and that Ubiquiti Wi-Fi stayed rock solid,” he says.

This is the trajectory newsgathering will be on for the foreseeable future, says Fesh.

“The companies [building IP newsgathering systems] have wanted more from the technology,” he says. “So they all have started developing algorithms and software to get even more out of the six [bonded] modems [in their systems],” he says.

“And that has brought us to the level where we are now getting very high quality HD through with very little break up.”