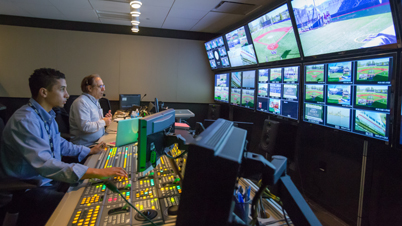 On any given weekend, the college sports conference can produce up to seven football games or a dozen basketball games. Pac-12 transports multiple raw camera and audio feeds from sports venues around the athletic conference via the Internet to one of three production control rooms in its San Francisco headquarters.

Pac-12 Networks is redefining the remote in remote production.

With the help of IP and compression technology, the TV and multimedia company of the Pac-12 Conference has stood remote television production on its ear.

Rather than feeding complete, produced live telecasts from a mobile production trailer on site, Pac-12 Networks transports multiple raw camera and audio feeds from sports venues around the athletic conference via the Internet to one of three production control rooms in its San Francisco headquarters.

Pac-12 Networks inaugurated this IP workflow in January 2012. This year, the network and its technical partners Nevion and Internet2 were shortlisted for an IBC 2015 Innovation Award in the Content Delivery category.

Pac-12 Networks’ IP workflow has made it possible to produce more games — 850 annually involving conference schools — at a higher and more consistent level than ever before, says Leon Schweir, SVP of production for Pac-12 Networks.

On any given weekend, Pac-12 Networks can produce up to seven football games or a dozen basketball games involving conference schools.

“Think of all of the auxiliary production elements we want to use on those events, such as graphic enhancements like circles around players and arrows,” says Schweir. “If we had to travel to each game with all of that technology and crew, it would be very costly, and quite frankly, we would say: ‘These games just aren’t going to get that treatment.’ ”

However, with what Pac-12 Networks has dubbed “MI/O,” or Mobile In-Out, boxes, which are based on the Nevion T-VIPS TVG450 gateway, 1080i HD video is compressed using JPEG 2000 and encapsulated for IP transport over the Internet to the network’s San Francisco production center.

Once at the facility, the IP feeds are converted back into baseband HD-SDI video signals so all of the production bells and whistles can be added.

“By centralizing in San Francisco, we can have our graphics, replay and artist people handle three or four games in the course of a day,” Schweir says.

“If you think about this concept that Pac-12 has put in place, it is almost like virtualizing their infrastructure. It is making the resources available from anywhere at any time in a way,” says Janne Morstol, Nevion chief strategy officer.

Each 1080i HD video feed from up to six cameras is compressed to an average of 100-125 Mb/s. HD video from additional stationary POV cameras, such as those positioned above a soccer or water polo goal, is compressed to between 50 Mb/s and 60 Mb/s, Schweir says.

The conference sports network had an inherent advantage in deploying its IP workflow because of the robust Internet resources available on the campuses of conference schools, he says. “We knew there were connections between each school, and we knew they were big.”

While transporting collegiate sports as IP packets across those networks wasn’t the top priority of the schools, Pac-12 Networks was confident it wouldn’t be the last priority either.

“We felt that we might get stepped on a little bit, but we were never going to get kicked off or lose connection,” Schweir says.

Pac-12 Networks relies on a fiber-based mesh network architecture among the conference schools that can “self-heal” by bypassing a failure or disruption between two points on the network, according to Schweir.

Based on its success using those circuits, Pac-12 Networks has also added leased circuits as needed at the MGM Grand Garden Arena in Las Vegas, home of the conference’s men’s basketball tournament; the Rose Bowl in Pasadena, Calif., which isn’t on the campus of UCLA and thus doesn’t have access to the university’s network; and Levi Stadium in Santa Clara, Calif., where the Pac-12 championship football game is played.

Pac-12 Networks leverages the work of Internet2, a consortium of universities, industry and government working on advanced network applications, which provides “a predetermined traffic flow” where IP routers and the gateways are larger than their average Internet counterparts, as well as the Nevion video gateways to transport content with 24-26 milliseconds of delay, says Schweir.

“That’s a little bit more than a blink of the eye,” he says.

IP content delivered to the Pac-12 Networks headquarters is converted back into HD-SDI baseband signals, which in turn feed all of the video switchers, graphics, slow-motion servers, audio consoles and other equipment typically used to produce a game.

For this turnkey approach to game production, a director calls shots to a technical director and interacts with others in the production crew in San Francisco as if they were all on-site.

A total of 350 of the games Pac-12 Networks produces are done this way.

When announcers work out of the San Francisco headquarters, the network adds a multiview monitor with various perspective on the playing field, Schweir says.

“They [the announcers] can see several angles at one look. So even though they may be looking at the batter-pitcher, they can see where the right and left fielders are — whether they are playing short or deep,” he says.

The IP network also supports transport of intercom communications with on-site camera operators and assistant audio technicians as well as data for display of the game clock and score bugs.

For the remaining 500 events, the San Francisco facility supplements an on-site production truck with added production components via the same IP network.

Over the past few years, the IP workflow has become so ingrained in Pac-12 Networks’ operations that old work habits, such as requesting real-speed angles of touchdowns during commercial breaks, are fading away.

“Because we have these IP paths everywhere, we don’t have to request those angles anymore. We can reach in and grab them, or they are already being fed to us separately while the game is going on,” Schweir explains.

Once produced, Pac-12 Networks games are again compressed and encapsulated for delivery via the Internet to network master control in Denver.

From there, the network feeds its games and other programming to seven linear networks on 73 MSO partners as well as makes its content available via its Pac-12 Now TV Everywhere product and online to over-the-top subscribers.

In Schweir’s view, transport of encapsulated, JPEG2000-encoded HD content offers television stations and networks a new way to report from locations where they will be over and over again, such as city hall, a stadium or arena.

“You may want a reporter once or twice a week at a stadium or arena,” he says. “Satellite trucks work nicely, but I can see having this kind of Internet connection, where you don’t have to roll that truck, as being an attractive alternative.”

“Pac-12 Networks is saving lots on the production side right now because they don’t need to take all of the equipment and all of these people out in the field to do these production,” she says.

“Using these points of presence makes a lot of sense for lots of broadcast applications.”