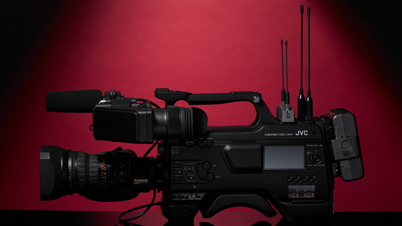 The shoulder-mounted GY-HC900 “Connected Cam” features the same streaming capability that has made ProHD camcorders popular with many station groups.

LAS VEGAS — JVC Professional used this week’s NAB Show to introduce a new ProHD camcorder, the GY-HC900, equipped with the 2/3-inch image sensors preferred by most large stations and networks for news production.

The shoulder-mounted GY-HC900 “Connected Cam” features the same streaming capability that has made ProHD camcorders popular with many station groups including Raycom Media, Quincy Broadcast, Waterman Broadcasting and Televisa in Mexico. It can work with any of JVC’s bonded cellular ProHD backhaul systems, either directly with the dockable ProHD Bridge unit or via Wi-Fi with backpack and vehicle-based systems, for a two-way IP workflow.

The GY-HC900 features three 2/3-inch CMOS image sensors for full HD imagery, and supports native recording of both MPEG-2 at up to 35 Mbps and H.264 (.MOV) for high-quality 10bit, 1080/60p 4:2:2 footage. The GY-HC900 will also stream at up to 20 Mbps and has built-in Wi-Fi (2.4Ghz/5GHz) with dual external antennas for connectivity. It uses a new communications engine that enables simultaneous recording, low latency streaming, and simultaneous decoding for return video and IFB.

JVC says latency can be as low as 500ms for both outgoing and incoming video with the new unit, which also features Zixi error correction with automatic repeat request (ARQ) and SMPTE 2022 forward error correction for reliable transmission.

While the GY-HC900 is well-equipped for field production, it also connects to the JVC FS-900 camera module and feeds 3G-SDI signals to a base station via fiber for studio production applications. Joe D’Amico, vice president of JVC Professional Video, noted that several years ago some smaller stations took JVC’s 1/3-inch shoulder-mounted ProHD camcorders and began using them as cost-effective studio cameras.

“Five years ago,1/3-inch was good enough [for studio use], but other manufacturers brought their prices down on their 2/3-inch cameras,” said D’Amico.

At NAB, JVC also introduced a portable ProHD decoder, the BR-DE900, and several new handheld ProHD camcorders including the GY-HM250U, which can deliver built-in lower-third graphics and full-screen titles for recorded or streamed video output without an external CG or production switcher.

The GY-HM250U’s lower-third graphics are generated and controlled using a browser-equipped device, such as a tablet or smartphone. It sells for $2,245 and will be available in May.