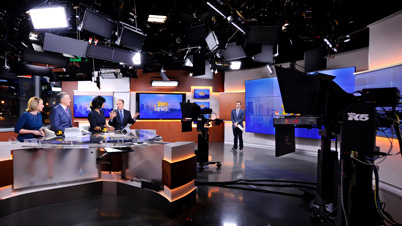 While Tegna’s Seattle TV properties downsized with the move to a new operations center, they upsized in technology, collaboration and growth potential. The new digs turn out more than 18 hours of news a day with state-of-the-art equipment including Sony cameras, automation, production switchers and news automation that controls gear from Evertz, Logitek, Grass Valley, Abekas and Ross Video.

Few could disagree with the concept of concentrating one’s effort, thoughts or energy to succeed with the task at hand, and it seems the same principle applies to TV broadcast operations, at least when it comes to the newly relocated home of Tegna’s KING, KONG and Northwest Cable News in Seattle.

“Our old building was built to be a corporate headquarters,” says Dick Trumbo, director of technology for the broadcaster. “It was simply cavernous. I mean huge.”

The old building was in the South Lake Union neighborhood of Seattle. King Broadcasting Co., the original owner of the Seattle station and many other broadcast properties, had owned the building, once a furniture showroom, since the late 1940s or early ‘50s, says Trumbo.

But successive acquisitions by a string of broadcast groups, including Providence Journal, Belo and Gannett, and divestitures of some broadcast and cable assets along the way left the Seattle broadcaster with a five story building that took up an entire city block.

“Human nature being what it is, people would find their own little personal corners of the building to set up their workspaces. It was nice and quiet, but long story short, people were scattered everywhere,” he says.

In an effort to create a more collaborative work environment and to cash in on the property, which is in what’s grown into Seattle’s “Silicon Valley of the North,” Tegna decided to relocate the operation to the first three floors of Home Plate Center, a building located catty corner to the main entrance of Safeco Field, home of Major League Baseball’s Seattle Mariners.

“Just being in a smaller space with the same number of people creates greater collaboration,” says Brendan Cline, project engineer at BeckTV, the systems integrator Tegna chose to design and build the new broadcast operation in Seattle’s South of Downtown, or SoDo, neighborhood.

Although Trumbo doesn’t know the exact square footage involved, Home Plate Center is about a quarter of the physical footprint of the old building, he says. “We are leasing three stories of the new building, so it is significantly smaller.”

So serious was management about fostering a collaborative environment that very few individuals actually have offices. Those who do get them because they have an “absolute need for a private space to conduct business” not because of their job titles, says Trumbo.

The first floor is home to where most of the broadcaster’s TV gets made. It’s most noteworthy space is probably Studio A where KING5 News, which airs on KING and KONG, is produced. The public walking by outside the building can look in through ballistic glass to see live newscasts being produced.

“I was extremely skeptical,” Trumbo says. “You are just inviting people [passersby] to be inappropriate on TV. But by and large, we have the best people outside our window interacting with us.”

Inside Studio A, four Sony HDC-P1 high-definition box-style cameras are mounted on Ross Video CamBot robotic pedestals to shoot the news. Anchors and weather talent work on a set conceived of in-house but built and installed by Blackwalnut in Valley Cottage, N.Y, says Trumbo.

Among the monitors on the set are a “giant” three-by-three monitor wall, which is fed video from an Abekas Tria clip server; a three-by-one vertical monitor stack behind the news desk —from the perspective of someone looking in from the street — and a Microsoft Surface Monitor, says BeckTV’s Cline.

Studio A also is home to the KING5 News weather center, adds Trumbo.

Most of the broadcaster’s more than 18 hours of daily news is produced in Studio A, but not all of it. Northwest Cable News is produced from “a two-to-three-person desk” in the newsroom on the second floor of the building, Trumbo says. The newsroom also has flash camera setups for news and weather cut-ins.

Studio B on the first floor is used primarily to produce locally originated programming, including a daily one-hour “live-to-tape” talk show. The program, New Day Northwest, has a studio audience “albeit a smaller audience than we had at our old, larger facility,” adds Trumbo. A single Sony box camera on a CamBot pedestal and jib-mounted camera, which can be moved between the two studios, are used in Studio B.

Two identical back-to-back production control rooms, designed to serve as backups for one another with the press of a few buttons, also reside on the first floor. The centerpiece of each room is a Sony MVS-6530 production switcher running under the control of a Sony ELC live production automation system.

“But my hands-down favorite piece of equipment is the Evertz EQX [288×252] router and Evertz VIP multiviewers linked via X-Link,” says Trumbo. “Any source in our router can be assigned to the multiviewer without a DA and the old way of feeding multiviewers with discrete video sources,” he says.

In total, the Evertz router directs HD-SDI signals throughout the new facility over some 65 miles of cabling BeckTV installed as part of the project.

The neatness of the wiring at the back of the router is particularly impressive to Trumbo. “I thought I was good at dressing in wires to make it look professional, and I just learned I am ranked middle of the road compared to BeckTV,” he says.

Someday, someone who will probably be in a hurry to figure out why something isn’t working just right won’t be faced with “a nightmare mess of wiring” and will be looking at wiring that’s “nice and straight and understandable,” Trumbo says, adding that he will make sure his engineers take the time to keep it that way.

Trumbo, who worked for 17 years as a maintenance engineer for KING before being promoted to his technology management position in May, is especially appreciative of the redundancy the two production control rooms offer.

“We had a single control room in that old facility, and boy, having been on the maintenance staff, it’s a lot of pressure when the switcher’s not working and you only have one. Having redundancy is very nice,” he says.

Master control for all of the Tegna-owned broadcast entities in Seattle, including KING, KONG, Northwest Cable News, and associated digital subchannels is located adjacent to the two production control rooms.

Trumbo declined to reveal the price tag of the new facility.

While it’s been only about six months since the broadcast operation went live from its new facility, Trumbo still remembers the switchover on Feb. 13, 2016, during Late Night with Seth Meyers.

“The moment we switched from our old facility to broadcasting from the new facility, the only thing you saw was a slight morphing of the picture,” he recalls. “It just worked. I swear to you, because I saw it, you could not tell.”

Since completing the move, Trumbo says the biggest challenge has been determining how best to use all of the technology available at the new site.

“The hardest part, which is on account of human nature, is to stop thinking you have to do something the way you always did it,” he says.

“Don’t paint yourself in a corner. That’s been the hardest part, but it’s also been the most fun.”