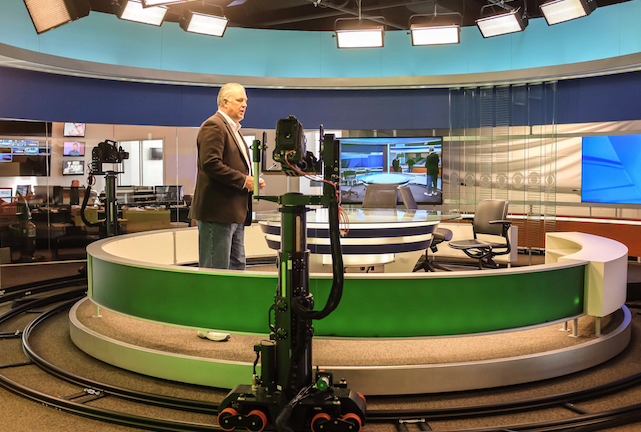 The Gray Television CBS affiliate in Colorado Springs is finishing up a news building that's only 9,000 square feet, but includes augmented reality graphics, a state-of-the-art power system and a new Gray-built system called GrayTooth that allows everyone from reporters to producers, to sales people and engineers to sit down at any workstation, swipe a key fob and pull up their customized desktop.

The new building, located in downtown Colorado Springs, is only about 9,000 square feet, and when you walk inside, you’re only steps away from the main anchor desk.

In a market fueled by major breaking news stories of wildfires and flash flooding, KKTV isn’t the only station in DMA 89 improving its facilities.

KXRM, Barrington’s Fox affiliate, renovated its building earlier this year to accommodate an influx of new employees, and KOAA, the Cordillera Communications-owned NBC affil, is embarking on a major, multi-million dollar construction project for its new studio in the city.

Nick Matesi, KKTV GM, says it isn’t a coincidence the stations are upgrading. “There has been so much breaking news in this market that it has become very competitive,” he says. “Everyone is pushing the envelope to try and capture the attention of the viewers, and I think they’re going to be blown away by what we’re doing.”

KKTV’s studio also includes augmented reality graphics, a state-of-the-art power system and a new Gray-built system called GrayTooth that allows everyone from reporters to producers, to sales people and engineers to sit down at any workstation, swipe a key fob and pull up their customized desktop.

The focal point of the set — designed by Los Angeles-based Michael Wright of WrightSet — is a round anchor desk, eight feet in diameter, planted on a round platform. Encircling that platform are two sets of tracks that a Ross Furio robotic camera system will run on. The cameras are operated from a control room behind the set, which viewers at home will be able to see.

Photo Gallery: Check out more photos inside the new KKTV at Playout.

During a rehearsal last week, anchors Don Ward and Dianne Derby and reporter Alyssa Chin demonstrated the camera system’s ability to smoothly pan horizontally while zooming in and out for segments that involve three people at the anchor desk.

“No longer are you going to see a camera pointed directly at an anchor with a graphic above their shoulder,” Matesi says. “It’s going to be fluid, conversational and completely flexible.”

On the set KKTV uses today, Derby says only three shots are used for newscasts. “With this, there are going to be so many more,” she says. “That variety is going to help improve the stories we’re reporting.”

Instead of over-the-shoulder graphics, the station plans to take a giant leap forward and implement augmented reality graphics by Vizrt that, from the viewer’s perspective at home, will pop up in the middle of the anchor table.

Vizrt’s solution is intelligent enough that when the camera pans or zooms, the graphic won’t break up. Instead, it will show that graphic — be it a 3D bar graph of election results or a topography map of weather coming over Pike’s Peak — from different perspectives.

Jim Ocon, Gray VP advanced technology, says his team will create a variety of graphics this month, some of which could include advertising opportunities for local businesses.

Opposite the anchor table is a large chroma key wall that will be used for virtual sets powered by the same Vizrt system. A demonstration of the technology showed talent standing on a virtual mountain and rain coming down in front of and behind that person. Vizrt’s solution includes camera tracking capabilities, allowing the camera to pan and zoom without the virtual set breaking up.

“The possibilities are endless on what kind of segments we can do from the virtual set,” Ocon says.

The chroma key wall will also be used for weather, but a dedicated weather set is nearby.

In all, only three cameras are used on the entire set — two on the tracks and one on a mobile pedestal.

The newsroom, set and combined master control and production room, called the media control center, are adjacent to one another, a deliberate move by the station to keep all staff in the loop during breaking news situations, says Liz Haltiwanger, KKTV news director.

“When it’s non-stop coverage, like it was during the wildfires and flooding, we need everyone on the same page,” she says. “With this new building, the newsroom and control room are only a few steps away. That’s huge for us.”

And no matter where Haltiwanger sits down in the building, she’ll be able to pull up her customized desktop and have all of her phone calls routed to that desk from any of the more than 50 workstations using GrayTooth, a solution created by Ocon made up of off-the-shelf IP equipment.

Staff will carry around a key fob, that when swiped, turns any workstation into their personalized workstation, including things like browser bookmarks and any applications they’ve downloaded. It will also let reporters and producers edit content at one workstation and pick up where they left off at another.

Ocon says GrayTooth could also be used for the robotic camera profiles. “Our talent are all different heights, so they would swipe their fob, and the camera system would automatically adjust up and down,” he says.

A state-of-the-art flywheel energy storage system cleans up the power from the grid and saves electricity. If the grid goes down, the 750-pound flywheel maintains power for at least a minute, allowing more than enough time for a generator to fire up.

“No one actually knows when the power does go out,” Ocon says.

Matesi says early power bills are less than a third of what he’s paying today at the 30-plus-year-old building they’re currently in. He expects it to go up slightly once people move in, “but it’s always a great thing when you realize savings from a project of this scope,” he says.

Next week on TVNewsCheck, look for an in-depth report on how virtual sets and augmented reality is making its way into TV stations around the country.

Hopefully we’re going to have a break from the fires, but with the Waldo Canyon burn scar flooding is going to be a 10 year plus “boom” for news in this town. It’s interesting to hear of so much investment in the news business.

The eye candy (augmented VR graphics) isn’t necessary in any news organization, local or national. It detracts from the story, not enhancing.