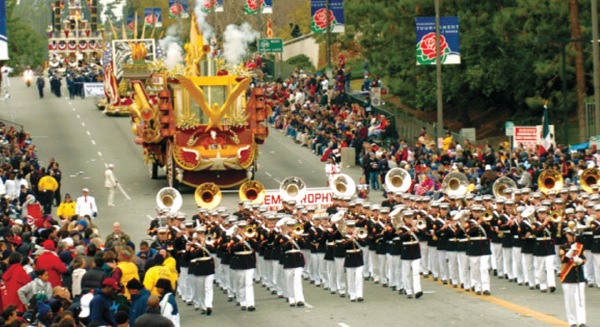 Tribune’s Los Angeles CW affiliate has been covering the parade live for almost 70 years. It distributes its two-hour broadcast to stations in the U.S. and more than 200 other countries. The production uses 17 cameras, including 11 along the parade route and one on a Goodyear blimp.

On Jan. 1, some 55 million people will tune into the 126th Pasadena Tournament of Roses Parade, which airs on networks such as ABC, NBC, Hallmark Channel, HGTV, Univision and American Forces Network. Another 25 million people outside the United States will watch it on networks like Costa Rica’s Teletica 7 and China’s China Movie channel.

But those TV networks are all newcomers compared to Tribune Media’s CW affiliate KTLA Los Angeles, which on New Year’s Day will air its 67th consecutive live broadcast of the parade from Colorado Boulevard in Pasadena, just outside of Los Angeles.

Earlier this year, KTLA’s live broadcast of the 2014 parade had a 14.6 household rating and 37 share, more than twice the combined rating for all its competitors, according to Nielsen.

“We do it live because back in the day, we could,” says Moczulski. “We think of ourselves as innovators. We had the first helicopter and the first mobile unit; both came out of KTLA. Our forefathers who started KTLA fresh out of World War II were innovators.”

The parade’s long history on KTLA began in 1948. The station’s general manager at the time, Klaus Landsberg, aired the parade live on New Year’s Day. That tradition continues to this day.

“We air the parade live from 8 a.m. to 10 a.m. without commercial interruption,” says Moczulski. “Then, we rerun it four more times throughout the day.”

The parade itself is a major undertaking for KTLA to cover. The station uses 17 cameras, including 11 along the parade route and one on the Goodyear blimp. KTLA began airing the Rose Parade in HD more than 10 years ago.

The cameras capture the parade and two co-hosts in a booth. For most years over the past three decades, those hosts have been the Newlywed Game’s Bob Eubanks and Stephanie Edwards.

Each year, it takes KTLA’s staff about six months to prepare for the parade.

“We start ongoing production meetings with the Tournament in July,” says Moczulski. “It starts to get intense in early October when the three primary float makers start getting the frameworks on the floats done. We also work with the parade organizers about what the opening of the parade will be. It’s generally a sponsored opening. That opening runs about two minutes long, which we produce. We feed that to all the stations that air the parade.”

The Rose Parade is two-hours long with 45 floats that are covered in many tons of rose petals, other flowers and natural fibers. There are 20 marching bands, 16 horse units and seven other performers. Some 700,000 people watch the parade curbside.

The parade is a natural fit for TV coverage with Pasadena’s reliably sunny skies, the parade’s brightly colored floats and music from marching bands that travel in from high schools and colleges around the country.

Moreover, the Los Angeles area that time of year is packed with out-of-town visitors for college football’s longest running tournament, the Rose Bowl, which on Jan. 1 will air its 101st game.