‘Live’ Scores A Touchdown With Strahan 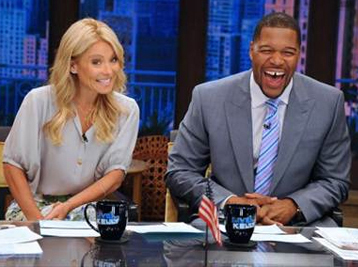 Live with Kelly and Michael takes the talk show crown in the week ending Sept. 9, the show’s highest season premiere in nine years.

The season premiere week of the newly rechristened Live with Kelly and Michael (Disney-ABC) was a big ratings hit in the week ending Sept. 9, taking the long-running strip to the top of the talkers. Meanwhile, newcomer Steve Harvey (NBCU) had the biggest debut week for a talk show since Dr. Oz (Sony). But most other daytime shows had lackluster results due to U.S. Open Tennis and PGA golf preemptions in the Labor Day holiday week.

The pairing of former football star Michael Strahan with Kelly Ripa as co-hosts of Live was a television event that sent ratings surging 27% from the week before and 8% from last year at this time to a category-leading 2.8 in households. The show also grew 20% week to week among women 18-34.

On Sept. 4, ratings for the first appearance by Strahan — which ended months of rumor and speculation — were a 3.3, matching Live’s highest rated season premiere in nine years.

Harvey, which was the only rookie to premiere during the frame, had the best opening week for a talk show since Oz debuted in 2009 and it did it while appearing only four days and in addition had an incomplete lineup including a number of major markets that did not air the show until Sept 10. Harvey drew more than 1.5 million viewers on average and clocked a 1.2 in households. It also scored a 0.8 in the key women 25-54 demo, which beat or tied eight of the 13 of the veteran talkers for the week.

National ratings for most of the other new talkers will be available next week.

Most magazines were lower, thanks in large part to preemptions from the Democratic National Convention, which began Sept. 4. Bucking the downtrend however was Access Hollywood (NBCU), which improved 6% in households from the week before to a 1.7 and spurted 25% among women 18-34.

Game shows were mixed. Wheel of Fortune (CTD) gained 5% from the prior session to a 5.8; Jeopardy (CTD) and Family Feud (Debmar-Mercury) were unchanged at 4.5 and 3.2, respectively; while Who Wants to Be a Millionaire (Disney-ABC) dropped 4% to a 2.3.

In latenight, dating show Excused (CTD) was steady at a 0.6.

In the metered markets, new talker Trisha (NBCU) premiered Sept. 17 with a 0.6 rating/2 share in 51 metered markets and held 100% of its lead-in and year-ago time period average in the key women 25-54 demo.

Also, Let’s Ask America (Scripps), a new concept game show strip that lets viewers be contestants via Web chats, began a seven-market run on Sept. 17 with a strong 2.7/4 in households.

Among the new talk shows that made their debuts on Sept 10, Katie (Disney-ABC) averaged a 2.2/6 for her first six days and set the pace in households. Jeff Probst (CTD) earned a steady 0.9/3 for its first 6 days and Ricki (Twentieth) trailed the field with a 0.7/2 six-day average. Nationally ratings for all of these shows will be out next week.