Lots Of Questions Over Post-Diary Ratings 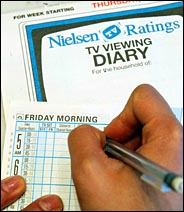 Nielsen announced plans last week to replace its paper ratings diaries with a system based on data from cable and satellite set-top boxes. However, many broadcasters still aren't sure how it's going to work. “They haven’t really told us that much about their plan going forward," said Raycom's Billy McDowell. Added Cordillera's Terry Hurley: "I'm hopeful, but skeptical."

A task force of at least eight Nielsen executives traveled to Phoenix last week to meet with small-market broadcasters and lay out the company’s plan to retire its maligned paper ratings diaries once and for all by early 2018 in the 140 remaining markets where they are still in use.

But even after Nielsen went to all that effort, broadcasters who met with the ratings firm in Phoenix complained that they still don’t fully understand the new system, how much it would cost or how it might impact their businesses.

“I don’t know a lot of details,” said Mike Meara, president of broadcast for St. Joseph, Mo.-based News-Press & Gazette, among those who got the pitch at the NAB Small-Market Television Exchange in Phoenix.

“They haven’t really told us that much about their plan going forward except that the diary will be eliminated and they plan to use a set-top box and the PPM meter where available,” said Billy McDowell, VP of research for Raycom Media.

Everyone agrees the retirement of the paper diaries is long overdue. They are seen as grossly inaccurate and they measure viewership only during the four so-called sweeps months each year — February, May, July and November.

The diary system lost its accreditation from the Media Rating Council in 2010.

According to Nielsen’s announcement last week, the paper diaries in the remaining diary markets will be replaced with a system that will derive household viewing data and demographic information from a combination of cable and satellite set-top boxes with so-called “return-path” capability and Nielsen’s own national people meters that are already installed in all 210 DMAs as part of its national ratings sample.

The new system will provide broadcasters in even the smallest markets with ratings 12 months a year, although the ratings will not be immediately available.

“We have electronic metered panels in all 210 DMAs,” said Kelly Abcarian, Nielsen’s SVP of product leadership, who spoke with TVNewsCheck. “Data from a given device or platform is the measurement means of the future,” she said. “And many devices have return-path capabilities.”

Nielsen has deals to collect data from Dish Network and Charter Communications, she said.

Nielsen’s plan is to have this new electronic system up and running by mid-2017, leading to the end of the diary system the following year.

The new system earmarked for the remaining paper-diary markets differs significantly from the system Nielsen has put in place in the 140 diary markets over the past two years.

It uses a special Nielsen meter, known as a code reader, to record viewing patterns in Nielsen homes. That viewing data is then combined with demographic data derived from the closest Nielsen people-meter markets — the methodology that has been dubbed “viewer assignment.”

Nielsen is not going ahead with installing the code-reader-based system in the remaining 140 markets because it could take up to 10 years or more to roll out that system, according to one of the broadcasters.

Nielsen’s new set-top initiative may be driven by competition from ComScore (formerly Rentrak), which already has a system in place for small markets that uses return-path set-top data.

“The choice for [TV station] companies will be: Do I go to Rentrak/ComScore or stay with Nielsen?” Meara said.

“Nielsen’s approach is much different than ComScore’s,” McDowell said. “[Nielsen plans] to create samples using available data in the market — from return-path data, from PPMs, from code readers or whatever they have available in each market.

Earlier this year, Raycom decided to go with ComScore in 23 of its diary markets.

Some broadcasters are concerned the Nielsen sampling will be too small.  “If they can get more MVPDs to participate, that’s the key,” Hurley said of Nielsen. “It would appear at this point that ComScore is winning the race. That makes them viable.”

Cordillera owns stations in 11 markets. All of them are Nielsen stations, but some also subscribe to ComScore, Hurley said.

“Another concern for small companies in small markets is that normally a change in methodology does not come at a cheap price,” Meara said. Nielsen officials didn’t discuss fees at the meeting he attended last week, he noted.

Nielsen has not yet applied for an MRC audit for its newly announced return-path measurement system. Its code-reader measurement system is now being “actively reviewed” for accreditation, reports David Gunzerath, SVP and associate director, MRC.

ComScore’s local-market system is also in the midst of the accreditation process, he said.

Despite the questions, McDowell is encouraged that Nielsen is finally getting rid of the diaries.

“And going to electronic measurement, which has the potential to be more stable and have potentially larger samples, that is a good thing.

Station should base their choice on MRC accreditation and price, not tradition.