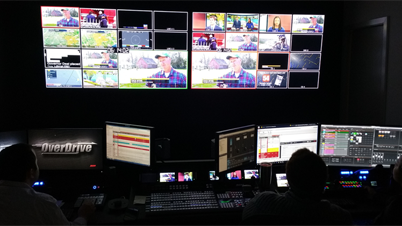 Media asset management systems are becoming more extensible, better integrated with newsroom technologies, and increasingly cloud-based, making it less important where the asset resides. Above: Earlier this year, Bitcentral announced that WFXG Augusta, Ga. was able to grow its news operations with the help of Bitcentral Oasis asset management and archive system, along with Precis for playout, a Ross OverDrive production control system and Grass Valley Edius nonlinear editing software.

Since the early years of development, media asset management (MAM) systems have evolved to incorporate sophisticated search, automation and workflow features that are useful in the newsroom.

Now, the platforms are becoming more extensible, better integrated with newsroom technologies, and increasingly cloud-based, making it less important where the asset resides.

“I think there’s a big opportunity in the newsroom space to change the way that people work and people think,” says Nigel Booth, EVP of business development at IPV, a MAM provider.

In October at NAB New York, IPV demonstrated cloud-based tools available in the Curator MAM, which is available as a hosted service, cloud-based platform, on-site installation or hybrid.

“A lot of the more traditional newsroom [MAMs] were installed some five-to-10 years ago,” Booth says. “There’s a major opportunity for a technology refresh there, and I think it’s these agile software based services for MAM that are potentially going to drive that. We’re seeing a fairly significant uptake in certain markets where people are looking at really changing that workflow around.”

One organization that had a vision for MAM early on is Hearst Television, an early adopter that continues to evolve its MAM systems in the newsroom and elsewhere.

“We positioned ourselves quite well to have automation and some pretty significant workflow enablement wrapped around our newsroom MAM,” says Joe Addalia, director of technology projects at Hearst Television.

Over the course of several years, Hearst rolled out 28 instances of Bitcentral’s Oasis asset management and archive system to the company’s stations, though it looks like “one big asset manager” to users, Addalia says.

Users can search and quickly find assets of specific local interest, such as footage of a local accident, or of broader interest (think “Trump”), that might return assets across the entire enterprise without having to actually move or copy the asset to the local system.

“You don’t want to move or store more than one instance of an asset unless you have to,” Addalia says.

Outside the newsroom, Hearst uses MAM systems, including IPV’s Curator, for creative services and production. They are separate, but connected, a deliberate choice by Addalia and colleagues, who sought “best-in-breed” MAMs for each department.

“If you don’t use best in breed, you end up customizing the heck out of it, and wind up with this one-off beast,” Addalia explains. “If you just stay with disparate systems and you connect them where necessary, you wind up being incredibly efficient.”

Remote workflows enabled through Hearst’s newsroom MAM allow field crews to shoot, edit, upload and directly link content to the editorial system. “They can actually commit a file directly to playout,” Addalia says. “In today’s MAM, that type of automation is absolutely required.”

In another scenario, a photographer in the field could retrieve archived footage, edit it into their package and submit it without having to come back to the studio, again illustrating how “MAM has moved pretty far away from just being a database, and now into some real enablement,” Addalia says. “The photographer in the field can do 100% of his job just by having a smart MAM with these workflow enablement tools wrapped around it.”

MAM Once, Publish Many

The next step for Hearst, Addalia says, may be enhanced integration of Oasis MAM in a way that facilitates publishing to various digital platforms.

Addalia and co-workers are looking at MultiPath, a digital distribution module from Bitcentral that is designed as an extension of the Oasis media asset management system. With MultiPath, a “produce once, publish many” solution, users can more easily repurpose video content and publish to multiple platforms, including social media and websites.

Addalia’s advice for others considering a newsroom MAM: look for a “best-in-breed” solution that’s going to fit your workflow, rather than a one-size-fits-all system.

“It’s all about the workflow, and it’s all about enabling your users,” he says. “To find one system and try to shoehorn all departments into that system might not be the best solution.”

More sophisticated asset management was central to a recent upgrade at Euronews, the multilingual news media service that reaches more than 294 million households in 150 countries via cable, digital satellite and terrestrial channels.

The Dalet Galaxy MAM platform has helped Euronews produce more than twice the amount of television content than it did under its legacy infrastructure, according to Dalet. In addition, Euronews is producing 20% more digital content because it’s now able to synchronize production of content between its TV and digital platforms.

“They became better at personalizing the content experience for the audience,” says Arnaud Elnecave, VP of marketing at Dalet.

“The more we move forward, the more audiences are going to be connected,” Elnecave adds. “Broadcasters need to understand these audiences better and provide them with specific content.”

Dalet has some interesting U.S. case studies regarding deployment of Galaxy at US broadcasting concerns that will be publicized soon, Elnecave says.

The future of newsroom MAM is in the cloud, at least for operations that are adopting solutions that are moving them away from server intensive solutions.

Call it what you will, but don’t call it MAM: “We don’t use that term anymore,” says Regis Andre, senior director of product management at Avid.

For the time being, Avid is still marketing its Interplay MAM solution for newsrooms and other departments, but as of IBC 2017 in Amsterdam, a transition is underway. Interplay is gradually being replaced by MediaCentral Asset Management, which Avid touts as a “powerful new integrated workflow solution” for news and post-production teams.

In the past, a newsroom would need several separate Avid products for story-centric workflow, production and asset management. With MediaCentral, they are all platform features that can be switched on and off depending on a newsroom’s needs.

“The administration, user management, licensing and other functions are managed on one system, so it’s very efficient,” Andre says.

Avid is betting that customers will appreciate the simplicity and efficiency that comes with a carefully integrated system that is not customizable, on purpose, says Andre.

“If you have too many customized solutions, it gets hard to maintain, administer, and upgrade,” he explains, “So the more you are using something off the shelf, the easier it is to get your solution supported and maintained in the future.”