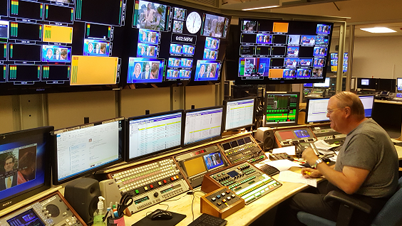 Changes are coming to master control and playout as on-premise and even public cloud-based replacements are giving broadcasters alternatives to their “big iron” and channel-in-a-box deployments.

Ongoing consolidation in station ownership is an important reason for a rethink,says John Studdert, VP of sales and marketing at Sony.

“Every station group, many of which are much larger than they used to be, is looking for efficiencies across all of their individual stations,” he says.

“If we can automate the process where the same tasks are happening at every single station and move that to the cloud and reduce the need for those tasks to happen at every station, that is a huge win.”

However, doing so in the cloud may be a bit premature. “If you invest in this [virtualized master control and playout] can you realize the efficiencies you started out imaging?” asks Sony’s Studdert. “I don’t know that we are there yet.”

Florical SVP and GM Shawn Maynard echoes that sentiment, especially when it comes to live TV. “We are not there yet. We have seen channels playing from a cloud environment, but these are set it and forget it type channels.”

But Ciaran Doran, Pixel Power EVP for international sales and marketing, disagrees. “Virtualized playout and master control is no longer ether. It’s real. We are putting in proofs of concept that are live and working, and doing so from tough environments like Amazon cloud,” he says.

At the 2017 NAB Show (April 22-27 in Las Vegas), Pixel Power will demonstrate its virtualized master control with full playout, live feeds, 3D DVEs and other sophisticated graphics running from the Amazon cloud with servers based in Dublin, Ireland, says Doran.

While these competing perspectives regarding virtualized master control and playout stand will be on full display at the NAB Show, other master control, automation and playout vendors will respond to a desire to centralize operations with tweaks and additions to their existing, more-conventional products.

For example, Bitcentral will present new members of its Central Control family, which extend the capabilities of its enterprise software solution for master control, automation and playout, says Fred Fourcher, co-founder, CEO and president.

“Some groups would like to rack up servers at a central location and transport the broadcast to the local station to go to air,” he says. “Others keep playout on site and manage that centrally, which has its own efficiencies. Still others have essentially local playout, and everybody is doing it locally.”

Each approach has its pluses and minuses, and there is no commonly accepted “best way,” says Fourcher, adding the introductions will help the company “support all of those models and make broadcast groups as efficient as possible.”

Controlling multiple locations from a central master control site is “the most important thing happening” in this slice of the television industry, says Jim O’Brien, president of Aveco. “That’s been the trend for years, and consolidation in the industry is likely to accelerate it.

“There are great efficiencies found in being able to remotely run master control, which in the case of Aveco includes running newscast automation for central sites on a zoned regional or national basis,” he adds.

While broadcasters seek these efficiencies, they don’t want to compromise their on-air look and the high-end branding they’ve had for years, he says.

At the NAB Show, the company will unveil its 25th Anniversary edition of Astra MCR with additional stream splicing options to enable insertion of localized ads at remote locations.

Factors other than consolidation are driving broadcasters to find new workflow efficiencies, however.

With audiences streaming movies, sports and other video content online and evidence like a March 2017 report from Leichtman Research Group showing more than 82% of U.S. TV households have a DVR, Netflix or use VOD, interest is running high among broadcasters in moving content to other platforms, says Scott Rose, director of product management at Grass Valley.

“Over the past year almost every broadcaster we talk to has discussed the challenge of getting content onto other platforms,” he says. “It’s the silent monster in everyone’s facility right now.”

Grass Valley is addressing that challenge with iTX On-Demand, which was introduced at last year’s NAB Show, and this year will feature recent iTX enhancements like transcoding integration.

“A high percentage of the conversations we’ve entered into over the last year regarding playout and master control have a VOD or OTT component,” he says.

Imagine Communications has focused its efforts on both channel-in-a-box and virtualized playout scenarios with its Versio platform.

In either case, Versio gives broadcasters the ability to do more with fewer resources, says Gareth Wills, a product manager at the company.

The company plans to show broadcasters how to achieve even greater efficiencies at the show with its Versio Master Control Surface (MCS), an intuitive touchscreen master control surface.

“We have a range of panels for master control, including one for sports events, which allows a user to move breaks around multiple channels, essentially reducing the number of keystrokes required,” Wills says.

The new panel allows a single operator to “move breaks across 18 channels in the same time” typically needed to move breaks from one channel to another, he says.

Over the past year, many broadcasters have continued to favor channel-in-a-box over traditional infrastructure system and expressed increasing interest in IP and virtualized systems, says Karl Mehring, director of playout and delivery, at Snell Advanced Media (SAM).

Ironically, however, at the very time these alternatives to traditional master control are gaining favor, some broadcasters are rediscovering the benefits of master control big iron, he says.

“UHD channels are emerging as a consideration, and people are beginning to look at traditional master control because with UHD you need four times the bandwidth,” he says. “In some ways, you need to go back to first principles of broadcast.”

While IP-based solutions can get broadcasters in the UHD game, some sort of mild compression is necessary.

“But a lot of broadcasters don’t want to go with compression at the moment,” he says. “They value the quality of their output too highly. I think that is why we are really seeing SDI-based master control coming back in.”

However, while more traditional master control may help broadcasters transition to Ultra HD operations, the long-term trend is away from big iron, says Florical’s Maynard. “Honestly, I think the idea of master control as we know it is dying. It’s not completely dead, but it’s headed in that direction.”

Vendors are working on master control and playout solutions in the cloud, designing solutions for interactive playout, live and breaking news and various control functions, and when they are done, the die will be cast, he says.

“I think there will one day be no master control as we know it.”

Fewer and fewer people doing more and more. With many of us not receiving raises…

Resulting in the quality of the on-air product suffering.