Back to TVNewsCheck Home Print this page
TVNEWCHECK FOCUS ON PROGRAMMING 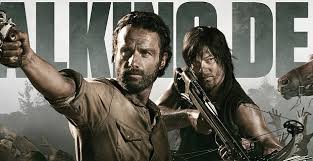 On Wednesday, Oct. 1, MNT will begin airing the first four seasons — 67 episodes — of The Walking Dead, the AMC mega-hit. MNT has the exclusive broadcast off-net rights to the drama for at least one season. MNT will also add Warner Bros.’ The Mentalist to its lineup on Oct. 2. It will be the CBS drama’s first airing in broadcast syndication.

It’s been awhile since MyNetworkTV generated much buzz. But the Fox network-turned-programming service has its affiliates and fans of post-apocalyptic mayhem talking as it heads into its ninth season.

On Wednesday, Oct. 1, MNT will begin airing the first four seasons — 67 episodes — of The Walking Dead, the AMC mega-hit. MNT has the exclusive broadcast off-net rights to the drama for at least one season.

MNT will also add Warner Bros.’ The Mentalist to its lineup on Oct. 2. It will be the CBS drama’s first airing in broadcast syndication.

“The Walking Dead and The Mentalist have reenergized the brand itself and our local stations,” says Paul Franklin, EVP-general sales manager of broadcast at Twentieth Television. “Their sales staffs and promotion departments are jazzed that these shows are coming.”

Last season, The Walking Dead’s fourth, it had an average audience of 18.3 million total viewers on AMC, based on Nielsen live-plus-seven-day ratings. If it were on broadcast TV, it would have ranked No. 4 in total viewers ahead of CBS’s NCIS: Los Angeles. Dead had 12.1 million viewers in the adults 18-49 demographic.

“We’re heading into the fall as optimistic about MyNetworkTV as we have ever been,” says Frank Cicha, SVP of programming at Fox Television Stations, which airs MNT on its 10 duopolies. “Every year, we want to grow. But I would anticipate that we’ll do better this fall with The Walking Dead.”

The Mentalist is a long-running hit, too. Last season, it averaged 11.5 million total viewers, based on Nielsen live-plus-seven-day ratings. The show stars Simon Baker as an FBI detective with nearly superhuman observational skills. Since 2011, The Mentalist also airs on Turner’s TNT.

“Adding The Mentalist is a very big deal for us,” Cicha says. “It is the first big CBS drama we’ve had, which is very exciting. You add that to our Law & Orders, and MNT is as good as it has ever been.”

MNT got off to a rough start. It formed from a large group of stations that were left without a network when CBS-owned UPN merged with Warner Bros.’ The WB, to form The CW.

MNT debuted as a network that aired original five-night-a-week dramas in the style of Univision’s Spanish-language novelas, such as Fashion House starring Bo Derek and Morgan Fairchild. That programming strategy quickly faltered.

“Following that setback, they began what is now a combination of off-cable and off-broadcast programming five nights a week,” says Bill Carroll, vice president and director of programming at Katz Television. “With a few exceptions, they have had a consistent audience while remaining competitive with the CW.”

“They’re not doing anything revolutionary,” says Carroll. “But they are doing what independent TV stations have done in the past and, to some extent, what cable networks do now. It is a strategy that works that they are using across all their markets.”

“Tribune Media’s MyNetworkTV in Philly [WPHL] has been a strong performer for us the past several years,” says Sean Compton, president of strategic programming and acquisitions at Tribune Media, which also owns MNT station KZJO Seattle and KAUT Oklahoma City.

“We have one of the healthiest MyNet affiliates in the country. The viewer circulation from our strong off-network shows and daytime products has a halo into other dayparts, making it easier for us to promote MyNet.”

For The Walking Dead, Twentieth worked with AMC to create four 10-60-second promotional spots, which MNT stations have been airing since the Fourth of July weekend. Twentieth is sending out a fifth promotional package called “Countdown” to stations this week.

“We started promoting The Walking Dead on July 7,” says Lew Leone, VP-GM of Fox-owned WWOR New York. “We’re ramping that up using both of our platforms, My9 and [WNYW] Fox 5. And we have tremendous reach on social media with Facebook, Twitter and our YouTube channel.”

Meantime, Franklin says he’s happy with MNT’s station clearances. “We are locked in for a number of years at 97%,” he says. “We’re in good shape in that regard. But we talk to stations all the time. We’re always working on new opportunities in the marketplace.”

“A lot of dot.twos are pretty strong in their markets,” Franklin says. “We’re not afraid of being on a dot.two station — some of them are very well programmed. But we are still primarily made up of a pretty strong lineup of full-power stations.”

Twentieth’s deal with stations is an all barter 50-50 split.

“What makes MyNetworkTV attractive is the cost factor, coupled with network-quality programs,” says Cicha. “We have been able to get shows that resonate with viewers and advertisers.”

MNT should do well with The Walking Dead. At least I’m glad they got rid of Monk, which was a stupid show.
The Mentalist sucks, so MNT will fail on that move. They would have been better off with CSI or NCIS repeats from prior seasons.