Back to TVNewsCheck Home Print this page
CES 2012 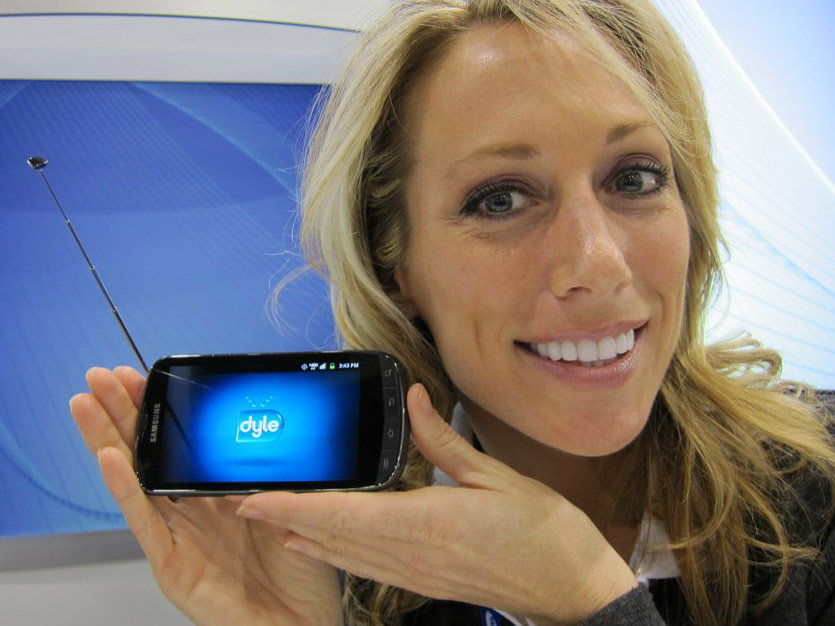 The two broadcasting ventures working to introduce mobile DTV services to the American public this year showed attendees at this week’s Consumer Electronics Show new devices and complementary apps for receiving the service, but neither was ready to reveal programming or launch plans.

The Mobile500 Alliance, comprising Sinclair and mostly smaller station groups, featured two dongles for turning smartphones and tablets into receivers of its yet unbranded service.

And Syncbak, a technology company backed by the NAB, the Consumer Electronics Association and others, presented its alternative approach for getting broadcast programming literally into the hands of viewers on the go — one that relies not on broadcasters’ digital broadcast channels for distribution as mobile DTV does, but on wireless broadband networks.

The Samsung phone that MCV showed was not the actual one that MetroPCS will be selling, but a developmental unit “very similar” to the finished product, according to MVC.

With the app, the phone was able to locate all the mobile DTV signals available in Las Vegas and display them on a grid-style program guide. Switching programs was smooth and easy. It took less than a second to change channels with a touch of the screen.

The Mobile500 showed two dongle receivers with Apple iPads — a small, white one by Siano, which developed the device in partnership with Elgato, and a slightly smaller, black unit made by Elgagto. They too worked flawlessly in picking up local signals.

Both feature three-inch antennas that slide and disappear completely into the unit for storage. Elgato VP of Marketing Adam Steinberg said he expects his dongle to ship as soon as Mobile500 is ready to go, which he believes will be as early as three months from now. Elgato will demonstrate the product and Mobile500 app at the upcoming Macworld Expo in San Fransisco, he said.

According to MCV and Mobile500, dongles and apps compatible with both Apple and Android devices will be available by the time their services are introduced.

Neither MCV nor the Mobile500 had much to say about what programming they would make available as each continues to negotiate for mobile copyright clearances to as much of the network and syndicated programming that make up broadcast schedules as they can get. Both see news and other local programming produced by stations as a given.

Speaking at a CES panel session about growing new platforms in general, Salil Dalvi, co-general manager of MCV, said: “Sometimes content owners have to be willing to make content available on new platforms even if they risk the anger of their existing distribution channels. Ultimately it’s a combination of the money being there” and taking heat from current partners.

But Dyle subscribers can look forward to a cornucopia of familiar network content, according to Dan Bethlahmy, director of TV marketing for NBCU Digital Distribution. “Think of it as taking your living room experience on the go,” he said. “So if you enjoy the Today Show, now you can watch it at Starbucks. Or enjoy a Univision telenovella during your work break.”

MCV iewers will have to catch these shows during broadcast. But the Mobile500 app has a DVR capability built in. MCV may add that capacity to later versions.

To address some of the concerns of the copyright holders, MCV has decided on deploying its service with conditional access, meaning participating stations will have to encrypt their signals. “Our top goal is to protect the content from theft and to make the business model flexible,” Dalvi said. “We want the ability to change the business model in the future if we decide to charge subscriber fees.”

Seeking the largest possible audience with a minimum of fuss, the Mobile500 plans on airing its programming in the clear.

Despite the different approaches, Mobile500 Executive Director John Lawson said he senses “a greater degree of cooperation” between the two groups and that he believe both want to ensure that the services are  “compatible and combinable.”

The groups have agreed to keep their hardware protocols open to one another, and to rely on software to manage consumer access and authentication, Lawson said. “We’ve kept our engineers in touch with one another to prevent hardware conflicts.”

Syncbak founder and CEO Jack Perry believes that it is imperative that TV stations stream their entire programming day on the Internet and across wireless broadcast networks so that consumers can tune in whenever and wherever they are.

But such non-broadcast distribution of broadcast programming runs into the same copyright problems that the mobile DTV players have. Owners of network and syndicated programming don’t want to see it popping up on other platforms unless they receive ample compensation. And they don’t want to see programming marketed for one DMA spill over into other markets.

Syncbak technology takes care of the local exclusivity concerns with its local authentication tool, which was demonstrated at CES.

About the size of a deck of cards, it contains both an ATSC receiver chip to confirm that the customer’s household is within range of local stations, and a WiFi transceiver to authorize all devices within the household.

“We wanted to prove to rights holders that we can make authentication work,” Perry said. “We can toggle individual program content off and on within any daypart. That gives networks a certain comfort level from the outset.”

Perry reported that several rights holders have tested the device and agreed that it limits consumer access to those already able to legally receive a broadcast signal. “I haven’t had a rights holder disagree yet.”

SyncBak’s goal is to provide each station’s full broadcast day over broadband to consumers. “But if we haven’t cleared a certain daypart, we can fill in gaps in the schedule with other programming we have cleared,” he said.

While Perry declined to identify the gap-filler programming, he said he expects to announce content partners “between now and the NAB” Show in April.

Perry is also enthusiastic about the social media options built into the SyncBak. They automatically allow viewers to notify others that they are watching a given show and to automatically post comments to Twitter and/or Facebook, he said.

Those comments can be displayed in an optional graphic overlay, he said. “In our pilot testing it gets used quite often.”

SyncBak has no immediate plans to exploit the advertising opportunities of these social features. Instead, Perry said it intends “to let broadcasters decide how to tie in local ads.”

Similarly, while SyncBak’s household-specific consumer data could allow for highly targeted ad placement, Perry wants to give his product a chance to establish itself “as a local sales tool, first and foremost.”

Local OTA TV broadcasters will jumpstart mobile DTV interest and receptivity by first enabling drivers of motor vehicles to hear each station’s full broadcast day programming through a variety of innovative measures. The NAB’s theme for this year’s convention, “The Great Content Shift: Defining Your Evolution”, will be the appropriate venue to identify these strategies.

The new mobile ATSC (DTV) standard would allow electronics makers to again try to popularize the vaunted wristwatch TV concept, which was tried and largely flopped a decade or two ago under the analog transmission era.

I think it’s a great idea. Sure, nearly everybody carries a smartphone these days, and if cellphone makers wanted to, they easily could equip units with the ATSC m/h mobile chip. But they won’t, because they want Americans to PAY for broadcast TV, and they’ve convinced a segment of the broadcast industry (which increasingly has become the wanna-be PAY TV industry), to go along with their plan to require that Americans SIGN UP to receive mobile TV signals, even those that simulcast existing TV stations.

If some enterprising company developed a “one-way” wristwatch TV that received mobile DTV stations for free, I’d snap one up. Anyone else?

Broadband greedsters in broadcasters’ clothing are erecting a registration toll booth even for viewers who only want to view free, over the air mobile DTV. Ever hear about the old adage, “give away the handles and sell the blades?” The broadcast industry is allowing broadband greedsters to wag the dog, putting up barriers to the “free and clear” reception of mobile DTV by consumers who would purchase mobile DTV hand-held sets NOW — if they were available, which, in large measure, they are not.

Yes Philly, it seems to me that broadcasters are like domesticated turkeys that drown because they look up into the sky during rain storms. Conditional access will kill mobile DTV! Sure, use broadband enabled devices to measure ratings, but leave the signal free and clear for non-broadband enabled devices. Like automobile back seat TVs etc. Why would I want to pay for a data plan to get mobile TV?

Exactly. I find it very disappointing that trade journal editors and writers are not all over this angle like white on rice. Wait — I was one of them. And I know that the ads would dry up if I became an open advocate of the “public interest.” So maybe I can act as a surrogate here!

Actually, it’s not just the public interest… it is in the interest of broadcasters and advertisers to keep free over the air TV available and ubiquitous whether you’re walking at a fast pace, in the back seat of a car, or outside of the house and standing still. Whether or not viewers are in motion should not be the criterion by which broadcasters limit distribution of their primary product.

Forget the back seat. Target drivers. They’ll listen to their favored, regularly scheduled programming while on the go. Made available in each ‘localized’ market, it should be “Free . . . In The Air . . . Everywhere”.

Actually, it’s becoming illegal in many states to operate any hand-held device in a car, and watching mobile DTV anywhere would be considered “distracted driving” and thus illegal on its face. You want local TV audio in cars? Easy. Stations can sublease frequency from radio licensees so drivers can listen on their existing car radios. It’s already been done — during last winter’s snowstorm in Philly, WPVI was on two FMs doing simulcasts, as I recall. There’s no technological impediment to simulcasting, only licensing and perhaps copyright issues. But I don’t see copyright playing a role when it’s local OTA we’re talking about, especially when the signal is available on both standard ATSC as well as ATSC m/h.