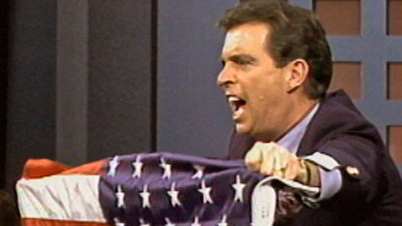 Produced and directed by Seth Kramer, Daniel A. Miller and Jeremy Newberger, Evocateur on CNN traces this blink-of-an-eye rise and fall of the earth-shaking talk show host.

NEW YORK (AP) — A man clears his throat and rages at the world. He claims to speak for everyday folks with conservative ideals and he savages anyone who challenges him. He is uncensored and high-decibel, an avatar of theatrics and must-see TV. He changes the terms of public discourse forever.

A quarter-century after dropping from sight, Morton Downey Jr. can be felt all too vividly these days on talk TV and radio, even reality shows – not to mention the presidential campaign trail.

What a great time to recall (or discover) this earth-shaking talk-show host. And what a fine portrait of him is “Evocateur: The Morton Downey Jr. Movie,” which premieres Thursday at 9 p.m. EDT on CNN.

He exploded on the scene in 1987 with a syndicated talk show that shattered the decorum of Phil Donahue’s program and the genteel give-and-take of “Meet the Press.”

Deploying a cavernous mouth stocked with a huge set of pearlies that inspired his program’s logo, Downey was raucous, raw, belligerent and derisive. From his studio in the working-class locus of Secaucus, New Jersey, he baited and bad-mouthed one segment of his audience while, for his proto-dittoheads, he reigned as a populist rock star who claimed to identify “with their needs, with their dreams, with their frustrations.” But no matter how they took him, no one could turn away from this architect of what was promptly dubbed Trash Talk.

After just two seasons, Downey self-destructed and was off the air. But just that swiftly he had paved the way for the likes of Rush Limbaugh and Glenn Beck and, arguably, Donald Trump.

Produced and directed by Seth Kramer, Daniel A. Miller and Jeremy Newberger, “Evocateur” traces this blink-of-an-eye rise and fall with sass yet remarkable balance while drawing on a wealth of archival material.

The film features vintage clips with guests including then-Congressman Ron Paul (to whom Downey bellows, “If I had a slime like you in the White House, I’d puke on you!”) as well as attorney Alan Dershowitz, attorney-activist Gloria Allred and the Rev. Al Sharpton, who, a party to an onstage brawl, ends up on the floor.

These include Bob Pittman, who, fresh from creating MTV network, was looking for a new adventure and thought he’d found one in Downey, a struggling singer-turned-talk-personality on local radio and TV.

“Until Mort came along, I think most talk-show hosts were needlessly polite, to the point of never getting the real issues on the table,” Pittman said recently in an interview with The Associated Press.

Until then, Downey had hardly set the world on fire. He was the privileged son of pop star Morton Downey, whose lilting tenor won him fame as “The Irish Nightingale.” Junior tried to make it similarly as a pop singer, and the documentary includes footage of him on a 1950s TV talent show competing for judges who include Dean Martin.

Even more surprisingly, the Downey family was close to the Kennedys – literally, as next-door neighbors in Hyannis Port, Massachusetts. As a dapper young liberal, Junior worked in Washington for Sen. Edward Kennedy.

At the other end of Downey’s career, the film tracks his rapid descent as overnight success fueled more and more outrageous antics, both on and off the show.

This peaked in April 1989 with an incident in a San Francisco International Airport men’s room in which he claimed to have been ambushed by neo-Nazis who painted a swastika on his face and attempted to shave his head. The incident turned out to be a desperate ploy by Downey to restore public favor, a hoax described in the film by an associate who helped him perpetrate it.

Within a few more months, his show was history. Repeated attempts at a comeback failed. Then in 2001, the man who once had boasted of smoking four packs of cigarettes a day died of lung cancer after spending his last years as an anti-smoking advocate.

“He was a very, very complex fellow – extraordinarily talented, extraordinarily tortured,” says Pittman. “We gave Mort a big platform, and on that platform he lost his way. Then it became one of the few shows in TV history where the producers canceled their own show.”

“Evocateur” closes with a final-credits spoof of the red-lipped title sequence from “The Rocky Horror Picture Show.”

But moments before that, Downey is seen being interviewed by “Today” host Bryant Gumbel, who asks him, “Is this a passing fancy, or is this a front of the wave?”

Before Downey can say, the film cuts to black. But every viewer of “Evocateur” already knows the answer.

Larry Fraiberg – WWOR President/GM (then owned by MCA) is primarily responsible for Downey – and what it spawned.