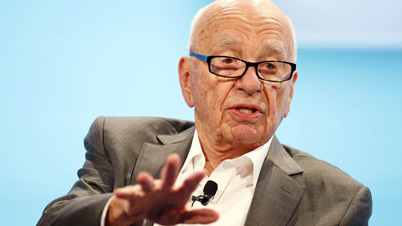 Fox Chairman Rupert Murdoch says if his post-divestiture company adds more stations, “it will give us greater strength in getting clearances. We will be in a mood to expand and do new things. And we will have the ability."

Fox Chairman Rupert Murdoch said that “New Fox,” pared down by its deal with Disney to its broadcasting assets and national news and sports networks, is interested in expanding its portfolio of TV stations.

“There will be opportunities,” he said he said on a conference call with securities analysts this morning. “It will depend on the price.”

“Certainly, if we have more [stations],” he said, “it will give us greater strength in getting clearances.”

New Fox will have revenue of $10 billion and free cash flow of least $2 billion, Murdoch said.

“We will start modestly on the dividend side and then we will see from there.

“We will be in a mood to expand and do new things. And we will have the ability. It will be somewhat underleveraged very quickly.”

Earlier this year, the FCC relaxed its national ownership cap in a way that would allow Fox to increase its household coverage to as much as 66%.

Of the major broadcast networks, Fox has shown the most interest in buying more stations in recent years. At one point, it made an effort to buy the Tribune group, which eventually went to Sinclair.

On the call, Murdoch said that he not concerned that new Fox will have less leverage in dealing with MVDPs for carriage fees because of its smaller portfolio of channels.

“We are in a stronger position, if anything, with [Fox Broadcasting] with the NFL and, particularly Fox News. Fox News is something just no one can afford to crop.”

Murdoch also said he was unconcerned with losing the Hollywood studio assets, saying there are plenty of places to shop for shows. “Warner Bros. and Sony will be looking to us to buy [their] programs.”

Murdoch dashed speculation that he would merge New Fox with News Corp., which he controls and is the Wall Street Journal and other newspapers. “We haven’t thought about combining with News Corp.,” he said. “If we do it, it’s way, way in the future.”

More stations? Welcome to 1987. Retirement might be a good option for Rupert.

the fox network provides what 2-3 hours of programming plus sports ? and then asks for 50% of retrains dollars ?
what part of that is fair ?

Buying more stations is like buying more chairs for the Titanic…. Time to rethink Rupert….

@oldschool I wouldn’t bet against the Murdochs, they have an uncanny ability to find success where others have failed and or struggled.

Don’t sound the alarm against buying TV stations. The whole world is not going to the internet yet. The internet does not know your DMA like the local TV station does. Local advertisers do not go to the internet to purchase ad time. They call up the local sales department of the TV station that covers the DMA. TV stations are still cash cows, and even though ATSC is looming, OTA broadcasting is here for the foreseeable future.

Now that net neutrality is revoked, it’ll be too expensive to watch your shows on the internet. Better get some rabbit ears!