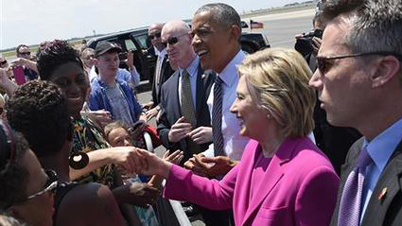 With a political trifecta that includes close races for president, U.S. senator and governor, TV stations in the state, especially in markets west of I-95, could see record political ad revenue this year after a slow-ish start. Kantar Media’s Steve Passwaiter, says predictions of $100 million-plus aren’t crazy. Above, President Barack Obama and Democratic presidential candidate Hillary Clinton greet people on the tarmac after arriving at the North Carolina Air National Guard Base in Charlotte, N.C. (AP photo/Susan Walsh)

But in other contests — of near-equal importance, some would say — the state alternates between blue and red. Obama in 2008. Romney in 2012. Three Democrat governors followed by a Republican. A Democrat and a Republican in the last two U.S. Senate elections.

So in 2016, with a political trifecta that includes close races for president, U.S. senator and governor, TV stations in the purple state of North Carolina could see record political ad revenue in 2016.

“The potential for a lot of heavy spending in the state certainly exists. We’ve looked at North Carolina as being one of the states in play.”

This year, the stars are not just aligning over North Carolina for a big-money election, they’re facing off. Presumptive presidential nominees Donald Trump and Hillary Clinton are among the best known presidential candidates in history competing for a state that’s gone two different ways in the past two national elections.

Add to that incumbent Republican U.S. Senator Richard Burr’s re-election bid against former state representative Deborah Ross. Burr had a war chest of more than $7 million after the first quarter of 2016, counting money already in the bank. But Ross reportedly outraised Burr in the first quarter $1.3 million to $1.1 million, suggesting the race could be closer than initially thought.

With a Senate race and an especially competitive governor’s race, Passwaiter says “this has the makings of a very big year.”

Most of the revenue is expected in the three largest markets — Charlotte (DMA 22), Raleigh-Durham (DMA 25) and Greensboro-High-Point-Winston Salem (DMA 46).

“The reach of the three major media markets is about 85% of all voters, says Joe Stewart, who observes elections as executive director of the North Carolina Free Enterprise Foundation.

“It was the first time the state had seen any action at the presidential level since the 1970s, except possibly 1992,” he says. Candidate Obama eked out a narrow victory in 2008, but didn’t fight as hard in 2012, he says.

In the non-presidential year 2014, Democratic Senator Kay Hagen lost to Republican Tom Tillis amid an estimated 114,000 TV ads, purchased by the candidates or by interest groups, at an estimated cost easily topping $70 million according to local news sources.

Organizations like Americans for Prosperity, a political group tied to the billionaire Koch Brothers; the National Rifle Association; U.S Chamber of Commerce; Senate Majority PAC; and the League of Conservation Voters have played multi-million-dollar parts in past North Carolina elections and may again.

Persuasion can work in the rapidly changing North Carolina voter base, says Stewart. “Fifty percent of the state is not native. The national narrative is likely to influence voters who do not think of themselves as Carolinians.”

Although they are sanguine now, well into late spring North Carolina TV station executives were worried the predicted spending might not materialize.

Even a rare second, June primary — brought on after the legislator redrew its redistricting map in response to a federal court order — did not seem to kick-start massive spending.

Steve Hammel, GM of Capitol Broadcasting’s WRAL Raleigh-Durham, believes the dollars will come, including $35 million or more for his market alone.

But if you’d asked him in May, or the early days of June, he says, “I’d have had a very different answer.” The big factor, he says, appears to be presumptive Democrat nominee Hillary Clinton’s gaining sufficient delegates for the nomination. The campaign’s first significant order came in mid-June.

One House race in Raleigh drew national attention and generated some spending for WRAL and other stations in Raleigh, Hammel says. Republican incumbent George Holding defeated fellow Republican incumbent Renee Elmers for the same, redesigned U.S. House District 2, which includes large parts of the Raleigh market. Elmers was targeted by conservative groups that reportedly spent nearly $1.2 million this year to unseat her.

“It was an unexpected race,” Hammel says. “They were the only two incumbents in the country running against each other.” But although the candidates and their supporters — particularly Holding’s — spent money, “it was not really a great windfall” for North Carolina stations.”

Predictions topping $35 million also attach to the Charlotte market, and with similar disappointing revenue until recently. The lack of clarity in the presidential race, says Scott Dempsey, VP-GM of Raycom’s WBTV Charlotte, was a likely factor in the late spending. “I’ve never seen anything like this political cycle,” Dempsey says.

“But it’s starting to come in in big chunks…. It’s taken a while to come in. But now that it’s coming, it’s going to be big.”

A Bloomberg analysis of Kantar Media found that Clinton spent heavily in Raleigh and Charlotte during the second half of June. The campaign pumped $853,000 into Charlotte alone, it says.

Michelle Butt, GM of Hearst Television’s WXII Winston-Salem, says she is cautiously optimistic. Comparisons with past elections, she says, may not work this year.

“There has been nothing in the past that would be apples-to-apples,” she says. “We didn’t know what the courts would do. We didn’t know we’d have two primaries this year. We didn’t expect to have a district with 23 people on the ballot. It’s been completely unprecedented and unpredictable.”

Butt, a veteran of TV news, thinks “a lot of this will be sorted out with the conventions. When they get past the conventions, they’re going to have to figure out their media messaging. That’s when everything starts to take shape.”

Candidates are beginning to make significant five- and six-figure orders, and much more political action committee money is expected in a post-Citizens United world, the broadcasters say.

“But we’ve seen nothing yet from [presumptive Republican nominee Donald] Trump,” Hammel says. The lack of advertising and fundraising, as of mid-June, was seen as one of the Trump campaign’s deficiencies, leading up to the shakeup on June 20.

“There’s a lot of concern about Trump not spending money,” Passwaiter says. But he adds, Trump’s campaign has had a lot of success doing the opposite of expectations, gaining extraordinary amounts of free media.

“Like George Costanza,” Passwaiter says. Trump’s approach seems to be, “I will do the opposite.’”

Clinton’s early buying is a smart strategy, says Passwaiter. “By booking now, rather than later in the fall, she gets an economic benefit; lower rates. Later, the demand will be higher.”

If Trump continues to refrain from buying, he says, “a lot of presidential money could be put into races down-ballot,” and McCrory could be the beneficiary. Due to his association with HB2, Passwaiter says, “the governor could be a bit of a lightning rod.”

Station executives agree that most of the political dollars will gravitate to the markets west of I-95, where most of the state’s population resides.

The last presidential election started out big, he recalls, but dropped closer to the election, with little spending in support of the Democrats overall. “We had a really busy September,” McNair says. “Then it trickled out,” McNair recalls, wondering about his market: “Are we too small, too red?”

In his market, even an extra primary hasn’t brought much money so far this year. “It was the biggest non-event,” says WECT General Sales Manager Mark Mendenhall.  “We expected more activity.” WECT reports several thousand dollars in orders from the gubernatorial candidates, but not since May. Clinton has been placing orders throughout the year, including recently. But nothing reported from Trump.

Mark Gentner, GM of Gray’s WITN Greenville-New Bern-Washington (DMA 99), agrees that “North Carolina is set up to be a tsunami of money,” but mostly for markets west of I-95. For his market, he says, “the wild card could be outside money.”

With money, of course, comes other problems. The Hagen-Tillis contest, Gentner says, brought “a couple of million” into the market, and created inventory problems, particularly for perennial advertisers like automotive.

“We live and work with these businesses every day,” he says. “We don’t want to see them get hurt. We may have to figure out some creative ways to meet everyone’s needs.”